Police in Spain have arrested a flatmate of a British man whose penis was cut off last Friday.

The British man is thought to be one of three people officially living in the property in where his amputated penis was found.

A police spokesman confirmed a man had been arrested on suspicion of wounding. 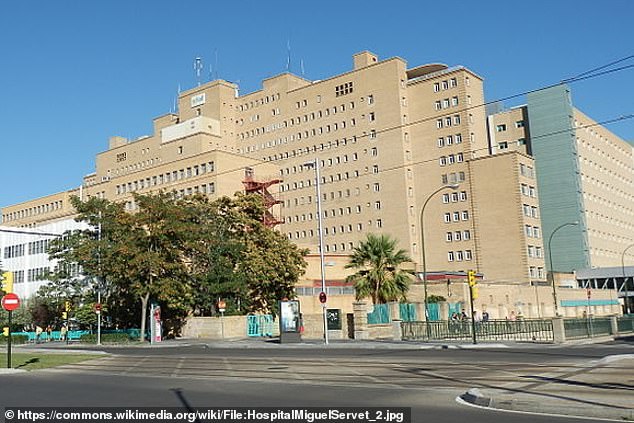 Officers in a patrol car heard him crying for help and he was rushed by ambulance to the Hospital Miguel Servet. Police managed to find his penis in a bag at home and rushed it back to the Miguel Servet Hospital in Zaragoza (pictured)

The whereabouts of the other flatmate, believed to be a woman, is not known.

Police were called after 33-year-old Londoner, identified only by his initials A.B, was spotted bleeding heavily in the street near his home, around 7pm last Friday.

It is understood the arrested flatmate told police the Brit, who is from London, had mutilated himself,

The age and nationality of the arrested man has not yet been revealed.

Local newspaper El Heraldo de Aragon claimed ahead of today’s arrest police had discovered the expat had registered on a social networking app a few weeks ago in search of a candidate to film him mutilating himself.

The paper said: ‘After we published a story on Monday about what had happened, the news appeared on Twitter, Facebook and other social media.

‘A man from Zaragoza subsequently used Twitter to claim that a few weeks ago he saw another person living in the city was using a social networking app to look for someone who would film him while he cut off his penis.

‘At that moment he didn’t think it was true, but after he found out what had happened last Friday, he immediately linked what he had read with what what had occurred.

‘One of the passers-by who saw the mutilated man bleeding last Friday in Gran Via read the Twitter messages afterwards and contacted the man who had written them and asked him if he could send him the profile picture of the man who was looking for someone to film him amputating his penis.

‘When he saw the photo, the witness realised that it corresponded with the person he had seen bleeding.’

The paper added: ‘The police have been told all this and have begun to investigate whether anyone responded to the macabre invitation of the young man.’

Police are believed to have launched a covert operation to debunk the Brit’s claims he had harmed himself after discovering a knife in the flat had disappeared and concluding the amputation was ‘too clean’ for him to have done it himself.

Officers have said there are ‘mental health issues’ surrounding the case and medical reports have pointed to the 33-year-old, described as an expat, suffering a schizophrenic psychotic disorder.

Even if he consented to having his sex organ chopped off, his flatmate would still have committed a crime if it is proved he carried out the macabre act.

Officials at Miguel Servet Hospital in Zaragoza where the man is still a patient have made no public comment, but the operation to reattach the man’s penis has been successful although it is not yet known if it is back to full working order.

One local report said tenants at the flat where the amputation is believed to have taken place were sub-letting rooms to others and up to six people may have been living in the property without the owner’s knowledge.

Police sources said today they were ‘surprised’ by the reports in El Heraldo de Aragon about the Brit trying to find someone to film him cutting off his penis and they weren’t giving them ‘much credence.’

According to Spanish press reports, the man was seen covered in blood as he stumbled around the city centre.

He told police he had amputated his own penis and had just left his house. Unconfirmed reports say he then put it into a shopping bag.

The National Police spokesman said: ‘A flatmate of the British man has been arrested on suspicion of wounding.

‘He is currently at police force HQ in Zaragoza and will be handed over to the courts for further questioning later, although that could now be tomorrow’.

It was reported locally police believe he had cut off the Brit’s penis with the man’s consent, and officers were now trying to find out if the detainee had been paid to commit the macabre act.

A police source said: ‘We are not saying anything officially about why it might have happened. All options are open.’

The age and nationality of the arrested man has not yet been revealed.