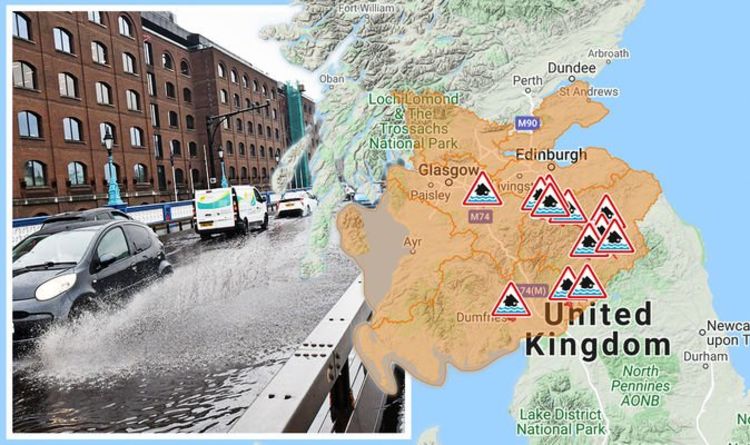 Flooding risk posed by torrential rain prompted a major incident to be declared and homes to be evacuated in Hawick in Scotland. Authorities said up to 500 properties were believed to be at risk of flooding. Britons have been inundated with torrential downpours, with forecasters predicting almost a foot of rain could slam some parts of the country in the coming days as danger-to-life floods grip parts of the nation.

Significant rain is expected in many areas of the country on Friday amid rain warnings from the Met Office.

The forecaster currently has four rain warnings in place – impacting parts of England, Scotland and Wales.

The first is in effect from 3am until 3pm and will see heavy rain hit parts of central and southwestern Scotland early on Friday, leading to a risk of some flooding.

Up to an inch is expected widely, but as much as 1.6 inches (40mm) could fall in western regions.

The second rain warning is in effect across parts of northern England and advises of heavy rain on Thursday and Friday with rainfall accumulations hitting as much as 3.1 inches (80mm) over some hilly regions.

There have been very high rainfall totals over the previous 24 to 36 hours across the north of the area – where an amber warning was previously in place.

The third rain warning is in force across parts of Wales with persistent and heavy rainfall expected over from 6am on Thursday to 3pm on Friday.

Up to 2.4 inches (60mm) is expected widely over the impacted region, with more than 3.9 inches (100mm) probable in some spots, most likely northwest Wales or Snowdonia.

Heavier bursts of rain are likely in isolated areas of south Wales with up to 2.4 inches (60mm) possible in a six to nine-hour period.

The fourth and final rain warning from the Met Office has been issued across southwest England from 3pm on Thursday until 9am on Friday.

Up to 1.2 inches (30mm) is expected widely, with up to two inches (50mm) anticipated in some areas – or even up to 3.1 inches (80mm) possible over the southern slopes of Dartmoor.

All of the weather warnings advise of a risk of flooding in the affected areas.

Is your area at risk of flooding?

The Environment Agency currently has 23 flood warnings and 49 flood alerts in force.

Predominantly these alerts are in place across parts of the South West and North West of England.

In Scotland, there are currently seven flood alerts and 14 flood warnings in force.

Natural Resources Wales has issued 33 flood alerts across the country predominantly across southern parts of the nation.

The weather forecast for Friday advises of wet and cloudy conditions expected for many during the morning.

Rain will be confined to northwestern areas later in the day, with sunny spells and a few showers developing elsewhere.

Conditions will be mainly dry and bright across parts of Northern Ireland.

This evening and overnight will be clear and dry for most at first, but cloud will soon build in from the west.

The cloud will bring some sharp showers and potentially the odd rumble of thunder across southwest areas.

The weekend will see the wet conditions continue with a rainy and cloudy start for most on Saturday.

The rain and cloud should clear eastwards during the day, leaving dry and bright conditions for some in the afternoon, with plenty of sunny spells.

However, there is likely to be the odd shower, particularly in northwest areas of the country.

Sunday could see more unsettled conditions as a low-pressure system is forecast to arrive, bringing with it rain and showers for many.

Weather conditions will be increasingly breezy throughout the day with this forecast to continue into Monday.