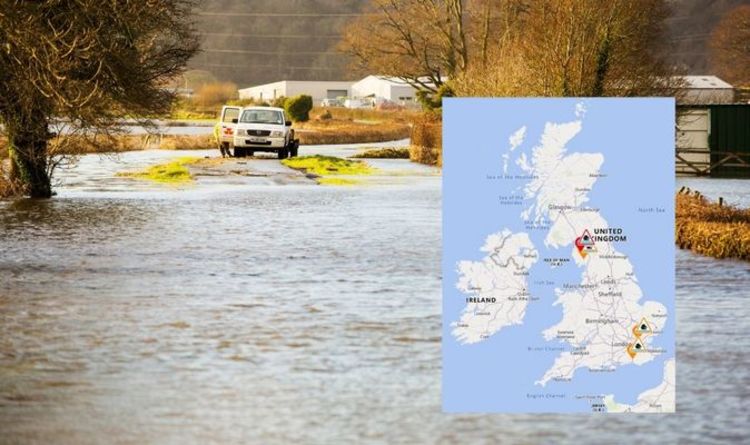 Hurricane Sam has sparked heavy rain and high winds across the UK, causing a wet weekend for many Brits. Today flood warnings have been issued for five separate areas in the UK, as heavy downpours continue. The predicted deluge could cause localised flooding – is your area affected?

Over the weekend much of the UK was blasted by heavy rainfall.

Some areas were spared from downpours on Monday, while other parts of the country continued to suffer from heavy rain.

The Government has issued flood alerts for five regions in the UK, as some rivers are forecast to burst their banks soon, causing localised flooding.

Which areas are covered by the warnings?

Four amber flood alerts have been issued by Gov.UK for Monday October 4.

Alerts have been issued for parts of Sussex, Essex and the Lake District, covering the following areas:

A red warning is currently in place for Keswick Campsite.

What do amber flood alerts mean?

An amber warning is put in place when flooding is possible.

The alert encourages residents in the area to “be prepared” for possible localised flooding.

Gov.UK has warned those living in areas covered by an amber alert to “take care near the areas of concern and monitor your local weather conditions”.

What do red flood alerts mean?

A red warning is issued when immediate action is required, as flooding will remain in place for several days.

It said: “This flood warning is expected to remain in place for several days, with further heavy rain forecast for Tuesday, October 5.

“We will continue to monitor the forecast and re-issue this warning if necessary.”

It advises the public to “avoid using low lying footpaths and any bridges near local watercourses”, as well as avoiding walking or driving through flood water.

The first warning will come into effect from Monday 5pm and will cover some parts of London, South East England, Wales, West Midlands and the South West of England.

This will come into force on Tuesday from 2am to 11.59pm.