The prom's advertised theme was "Welcome to the Jungle" and staff at Christopher Columbus High School went to some effort to fulfil this promise of the wild.

Not that the all-male Catholic prep school waived its standards of etiquette for the big night on Friday. The boys – about 400 were due to graduate this year – were told to arrive at the DoubleTree by Hilton Miami Airport & Convention Centre in jackets and ties, clean-shaven, sober and unpierced. Their dates, too, showed up looking as proper as befits such a milestone.

The prom had been decorated like a real, wild safari camp – or at least some Hollywood approximation thereof, with faux-rock walls and fake snakes and trees along the main wall.

Other decorations were real. A live lemur and macaw were incorporated into the spectacle to serve as props for the students' take-home photos. Boys and girls passed around a tiny African Fennec Fox like a corsage – though the fox hung rather limply in photos that have since been deleted from a school Instagram account.

The school's student activity committee has also vanished pictures of prom night's wildest surprise – a live tiger to entertain the students, for which the principal has since apologised.

The tiger was wheeled through the double doors midway through the event, in a cage not much larger than its massive frame, accompanied by spotlights and the thud of drums.

"Oh my God! Oh my God!" a young man shouted in student videos of the tiger's presentation.

"Oh my God," said woman at a table near the front. "It's so beautiful." 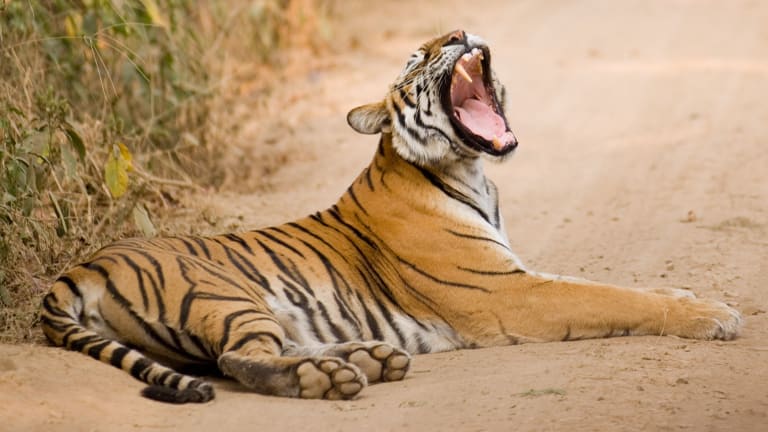 An uncaged tiger in its natural habitat.

The animal paced in tight circles as the students gawked, seeing nothing in any direction except metal bars and a sea of delighted faces.

As the drumming quickened, two performers walked out into the space between the cage and the crowd. They were dressed in patterned bodysuits vaguely resembling the tiger's stripes, and both held lit torches in their hands.

"It's super scared," someone in the crowd observed as the dancers juggled flames before the tiger.

'They considered it exotic and fun'

As the show went on, the tiger eventually stopped circling and curled up in a corner of the cage, facing away from the fire dancers and the bulk of the crowd. In a statement to reporters, the school would later call this "a relaxed state" – though the animal's emotions are less clear in student video footage.

The tiger lay still as the dancers flung torches a few feet away. It stared at the fake rock backdrop and the wall-mounted TVs that looped video of real grasslands.

It could not escape the light show. Where there was not fire, geysers of sparklers exploded on every side of the tiger, drawing applause from the boys and their dates.

Like many students, Mari-Cris Castellanos's younger brother had not minded the performance, the 19-year-old college student told The Washington Post. He had paid $200 to attend the prom, she said, and thought "the tiger was having fun".

When her brother sent her video of the animal "in a small cage, with nowhere to escape or run to, surrounded by screaming teenagers," Castellanos said, she forwarded the footage on to the media and the general public – and called for a ban on animal entertainment inside schools.

"They considered it exotic and fun," Castellanos said. "For such a religious school to demonise a poor creature."

Not everyone agreed. "My son attended, and in no way shape or form was he offended," Johanna Garcia Hernandez wrote on the school's Facebook page. Christopher Columbus defended the tiger show – at first.

"The tiger, which was displayed for a few minutes in a cage, was never harmed or in danger, was not forced to perform, was always accompanied by his handlers," the school wrote in a statement to the Miami Herald. "And for the great majority of the time was lying down in a relaxed state facing away from the audience."

The farther from the Hilton the images travelled, the more criticism fell on them.

'This tiger is being stressed out'

"Its tail is slashing back and forth, its ears are going into helicopter mode," Magill told ABC 10. "This tiger's not having a party; this tiger is being stressed out."

On Sunday, the school backed off its defence of the prom."We recognise this decision has offended some, and for that we apologise," principal David Pugh wrote.

"We will evaluate our current policies and procedures in the planning and management of school events, including the impact these events have on others. We all have learned a great deal from this experience."

The school did not respond to questions asking which company provided the prom animals and how administrators decided on the jungle theme.