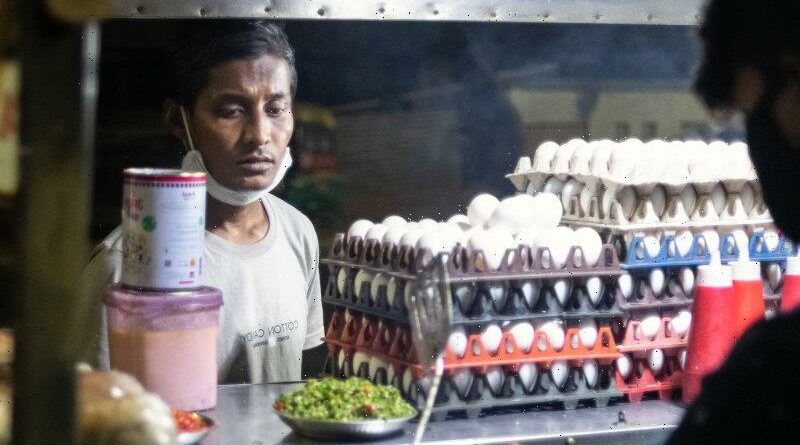 And with that, the government had conducted a successful crackdown on eggs. 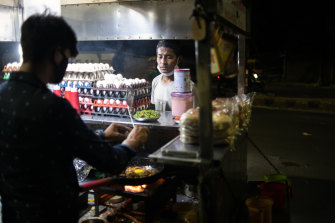 Not just the eggs themselves, although city officials had confiscated hundreds of trays of those, too.

Authorities grabbed everything — gas canisters, bread, vegetables, plates, glasses, stools — that one might need to run a food cart to sell eggs scrambled, fried or wrapped in a fragrant breading. On the curb, only broken shells remained.

The food-cart operators who got away counted themselves lucky to have escaped.

“We found out that the truck was approaching our location,” said Virendra Ram Chandra Singh, who added that he could prepare eggs 156 ways. “We ran home with our carts, pushing hard and fast.”

The place of the humble egg in the street food culture of Gujarat, a state in western India where people take their snacks seriously, has become the latest flashpoint in the growing role of religion in everyday life. 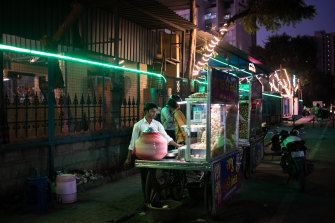 Under Prime Minister Narendra Modi, who has a Hindu nationalist base, the national government has taken steps in recent years to promote the religion and to sideline Muslims and other groups.

That is especially true in Gujarat, which Modi led for 13 years before becoming Prime Minister and which is often seen as a laboratory for pushing policies to reshape India along his Hindu nationalist vision. Those include tightening a ban on alcohol and adding protections against the slaughter of cattle, which many Hindus consider sacred. 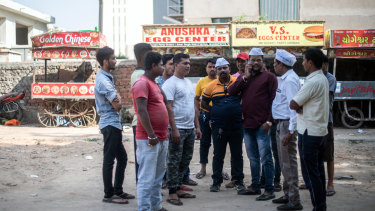 Rakesh Maheriya, third from right, who is president of a street vendor association. meets with fellow vendors in Ahmedabad, India.Credit:New York Times

But even devout Hindus don’t always agree among themselves what practices the faithful should follow, a conflict that also raises issues of income and class. Hence the bitter disagreement over eggs.

Many Hindus are vegetarian, particularly among the elite within India’s traditional caste system, and some of them consider eggs to be meat products.

Citing complaints from Hindus as well as health concerns, local officials in Ahmadabad, Gujarat’s largest city, and at least four other cities in mid-November banned the sale and display of meat, fish and eggs on the street.

The mayor of one city, Rajkot, told local news media: “Carts with nonvegetarian food can be seen everywhere in the city. The religious sentiments of the people are hurt by this.” 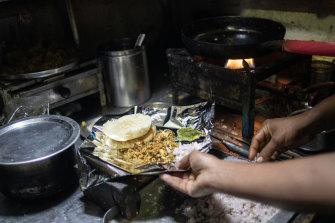 A street vendor serves up scrambled eggs and a roll.Credit:New York Times

Local authorities weren’t expecting the backlash. In recent days, facing a lawsuit and protests, officials in Ahmadabad relented and allowed sales of previously forbidden food to resume for now, although the dispute is being considered by the courts. They did not respond to requests for comment.

With Hindu nationalism on the rise, food has drawn more headlines. Hundreds of people lost their jobs when one of the BJP-led states in northern India began shutting down slaughterhouses. Muslims accused of slaughtering cows have been lynched by mobs. In the southern state of Karnataka, one Hindu leader has vowed to protest a plan by some local officials to provide eggs for school lunches.

Those beliefs can run counter to India’s economic goals and changing social mores. Consumption of eggs in India has grown substantially in recent years as more families have entered the middle class. They now eat 81 per person per year on average. (Americans, by contrast, average more than twice that.)

The ban on eggs certainly had its fans.

Naresh Kansara, an official at a large Hindu temple in Ahmadabad, said it was wrong to sell nonvegetarian food nearby. “Why don’t they eat at a hotel, away from public view?” he said. “Why so openly?”

Still, the egg ban caused an uproar. The confiscation of carts in November galvanised street vendors, who began protesting outside government offices.

Singh, the Ahmadabad food-cart operator who escaped the November crackdown, migrated from poorer Bihar state in the 1990s during a period of economic liberation. Bit by bit, he built a name for himself on the versatility of his eggs.

The president of the street vendors association in Gujarat, Rakesh Maheriya, said mostly Hindu vendors and customers were being punished. Many vendors are from the lower castes, a large voting bloc, and many Hindu customers were incensed as well.

Dhara Patel, a 20-year-old engineering student who consumed her favourite dish, minced eggs, a few times a week in the roadside stalls near her college, said the meal was her only source of protein.

“Why does the government have a problem if we want to eat eggs?” she said. “It’s also about the livelihoods of those street vendors.”

Although the local government now says coercive action won’t be taken against egg sellers, municipal officials have yet to rescind their ban formally. Vendors said they had been given assurances that they could come back.

Still, along the lakeside road where they once sold their eggs, the number of food carts has dwindled, a sign to them that the egg crackdown is far from over.

“Who knows how long we will be allowed to be here?” Singh said. “They can do anything, anytime.”