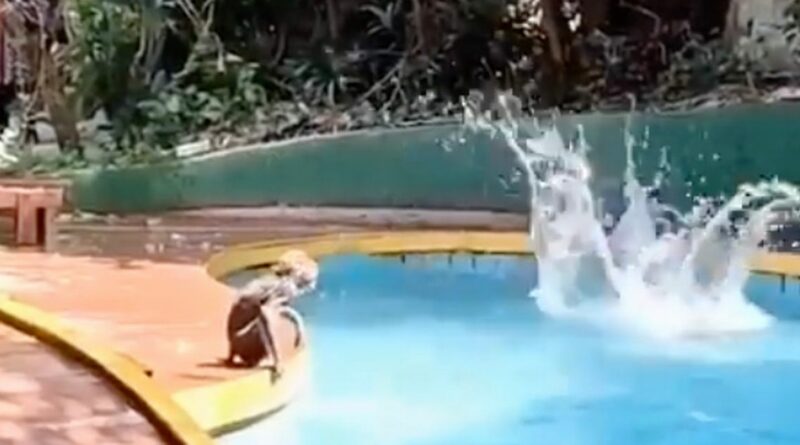 A group of monkeys have taken the lockdown advantage to fullest as video emerged of the primates taking a dip in a swimming pool at an Indian resort.

India reported another record rise in Covid-19 cases over the past 24 hours, as the number of confirmed cases reached more than 21.4 million and at least 234,083 deaths.

The country's healthcare system is struggling to cope as patients being held up in hospitals that are in desperate need of oxygen equipment, medicines and vaccines.

While medical experts, opposition leaders and even Supreme Court judges are calling for national restrictions, many hotels and restaurants closed their businesses to prevent the spread of the new variant.

In one clip seen more than 633,000 views, the macaques are seen taking turns to take a leap and jump into the cooling water, making a big splash in the pool.

They get out of the water and climb on the umbrella and ready for the second round.

A staff member working the resort is also seen taking videos of the playful monkeys.

According to the post on Twitter, the scene was captured in a resort in Mahabaleshwar, a forested town south of Mumbai.

It read: "Meanwhile this Mahabaleshwar resort is full to capacity despite lockdown!"

Viewers were surprised to see the animals being "polite" as they lined up before jumping into the pool.

"Very good. Let them enjoy a world without any disturbance from humans," one said.

A second commented: "You know what I like? That they politely wait to take turns, unlike what many humans would do."

Indian Prime Minister Narendra Modi has so far left the responsibility for fighting the virus in this current surge to poorly equipped state governments and faced accusations of doing too little.

His government has countered that it is doing everything it can, amid a "once-in-a-century crisis".

Dr Randeep Guleria, a government health expert, said he believes that a total lockdown is needed like last year, especially in areas where more than 10% of those tested have contracted Covid-19.