Home » World News » For George Pell, ‘Sin City’ was the right place at the right time

The placards read “Pell: Go to hell”, “Homophobia kills” and “Get your rosaries off our ovaries”.

About 80 protesters, many from a group called Community Action Against Homophobia, greeted George Pell outside St Mary’s Cathedral for his installation as the Archbishop of Sydney on the evening of May 10, 2001. Several were arrested. It was a welcome Pell would have fully expected. 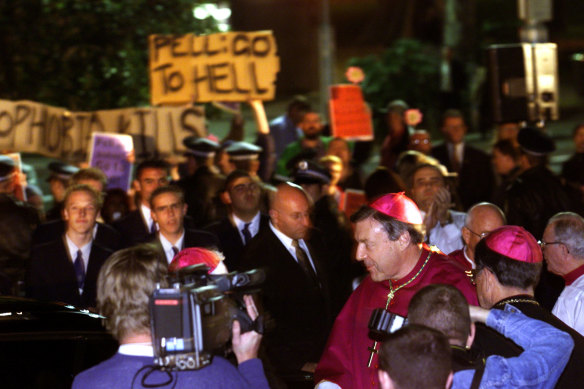 George Pell on the night of his installation as Archbishop of Sydney.Credit:Nick Moir

It is easy to forget now that at the turn of the millennium, Sydney was seen by many puritans and conservatives as a den of iniquity – the city of Kings Cross, the Gay and Lesbian Mardi Gras and proposed heroin injecting centre.

At the pulpit that night, Pell queried his new home’s reputation for flamboyance and hedonism. “One or two local writers seem to suggest that sin is a recent Sydney invention,” Pell said.

“However, human weakness also flourishes in other parts of Australia and the beautiful passage from St John’s Gospel reminds us that human perfidy is as old as the Garden of Eden.”

Then Sydney Morning Herald journalist David Marr – who was in the church that night and may well have been one of the writers Pell was talking about – described the archbishop’s arrival as a “big, perhaps turbulent, civic presence”, predicting that unless he were summoned to Rome, he would surely make himself “as much a Sydney landmark as the brand-new spires of his cathedral”. 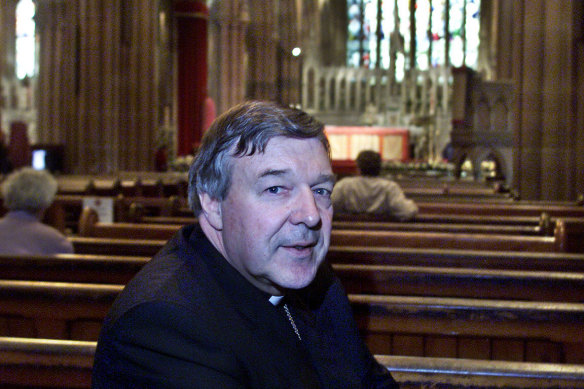 Pell certainly put his stamp on the church over the next 13 years.

In 2003, two years into his tenure, he stunned many Sydney Catholics by appointing two conservative auxiliary bishops, Anthony Fisher and Julian Porteous. He was accused of trying to stack the diocese with fellow travellers and, in the Herald’s words, “purge the Sydney archdiocese of its liberal streak”.

Fisher, who replaced Pell as archbishop when he left for Rome, paid tribute to his predecessor on Wednesday as “a man of courage and with a big heart, who trusted in divine providence”. He said Pell’s episcopal motto was “Be Not Afraid”, and lived up to that maxim in “good days and bad”.

“He fearlessly proclaimed the Gospel and worked to explain the teachings of the Church. He spoke truth as he found it, however difficult or unpopular,” Fisher said. 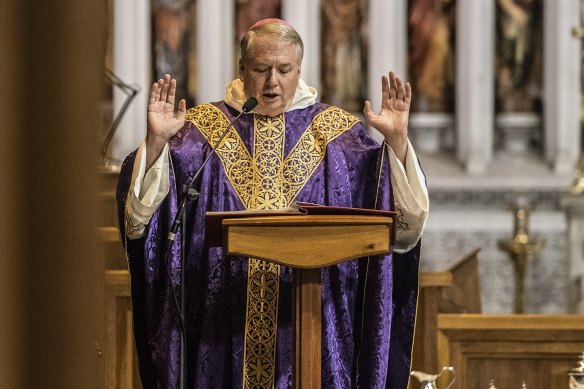 He saw Pell just last week in Rome for the funeral of Pope Benedict XVI, a friend and philosophical ally of Pell’s. “The Cardinal and I did not know it would be the last time we would see each other in this life, but he was in good spirits and his regular, witty self, and I am thankful that we shared this time together,” Fisher said.

In his 2013 essay The Prince, David Marr described Pell’s transition to Sydney from Melbourne as both challenging and timely. He lacked the networks and alliances he enjoyed in Victoria, and was entering a supposedly more liberal Catholic environment.

But he was also somewhat removed from the sexual abuse allegations levelled at the church in his home state, and the so-called Melbourne Response he had established as archbishop there.

“He was dealing with a different town and a different church. This was not [B. A.] Santamaria territory. NSW and its hierarchy had sided against Pell’s kind of Catholic,” Marr wrote in 2013.

“Fresh news of clerical sex crimes kept breaking [in Melbourne], but in Sydney this was hardly reported. It was as if he had left the scandal behind.” 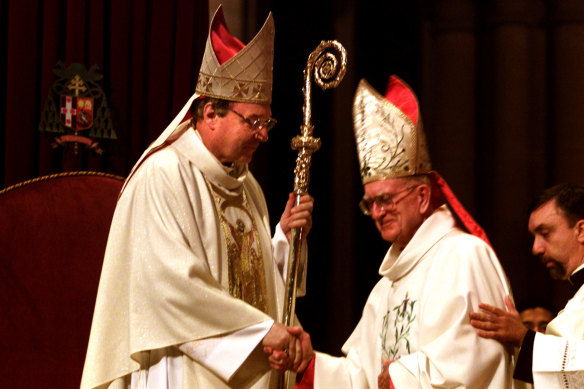 The incoming Archbishop of Sydney George Pell receives the staff from his predecessor Edward Clancy in May 2001.Credit:Nick Moir

Pell’s first Sydney mass on that Thursday night in 2001 was attended by then prime minister John Howard and opposition leader Kim Beazley, among other dignitaries. And the protests against his appointment were largely scorned by the press, including The Sun-Herald, which used its editorial that weekend to call for respect.

“Sydney is a brash and robust town, with a folklore built on colourful characters. For that reason alone, we should welcome Pell,” the paper implored.

With his deep intellect and divine righteousness, Pell threw himself into the political debates of the city and the nation. His consecration as archbishop came days after Sydney’s supervised heroin injecting room opened mere blocks away in Kings Cross, supported by the Uniting Church. Pell opposed the clinic, having said weeks earlier in a doctrinal statement: “If you are pumping heroin in, it is never safe.”

He also became involved in the debate over a ban on stem cell research using surplus IVF embryos. Howard had sought Pell’s counsel, along with other religious leaders, in the days leading up to his decision – but legalised it anyway despite their objections.

Writing for the Herald at the time, a defeated Pell said the public deserved better than “politicians looking for photo opportunities with sick people seeking cures”.

Only a year into his Sydney stint, Pell was hit with an allegation of historical sexual abuse from a Victorian man. The man alleged Pell abused him at an altar boys’ camp on Phillip Island in 1962, when he was 12 and Pell was a student priest.

A committee of the Australian Catholic Bishops’ Conference asked retired judge Alec Southwell to examine the claims. Amid doubts over the complainant’s evidence, Southwell found the complaint had not been substantiated. Reporting on the outcome in October 2002, the Herald concluded that Pell “remains the man most likely to become Australia’s next cardinal”. That prediction came true a year later, when Pell was elevated by Pope John Paul II. 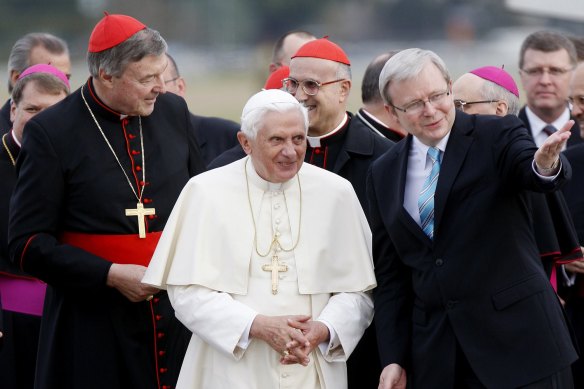 Arguably, Pell’s apex as Archbishop of Sydney came in 2008, when he hosted Benedict for World Youth Day. The event, held every three years in a different city, attracted hundreds of thousands of Catholics from Australia and the world, the old maritime docks of Barangaroo heaving under the weight of the crowds.

However, it was not until 2014 that he was summoned to Rome by Pope Francis to serve as the Vatican’s treasurer.

Benedict used the occasion to apologise to the victims of sexual abuse by Australian clergy, and met with a small group of survivors at St Mary’s before leaving the country.

“These misdeeds, which constitute so grave a betrayal of trust, deserve unequivocal condemnation,” Benedict said. “They have caused great pain and have damaged the church’s witness.” 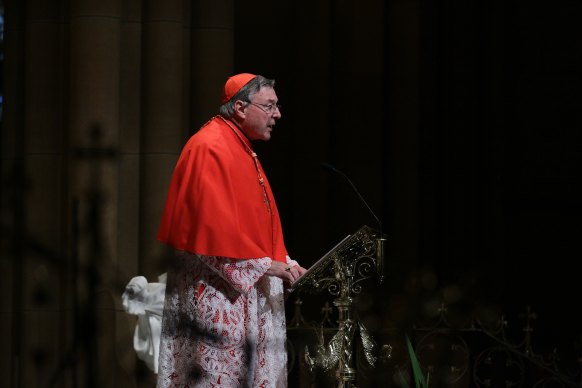 Cardinal George Pell, then archbishop of Sydney, leads a mass on the 10th anniversary of the September 11 terrorist attacks.Credit:Kate Geraghty

In many ways, Pell was better suited to his adopted Sydney home than Melbourne. His outspoken, head-kicking, brawling manner was perhaps more welcome in Sydney than in the staid refines of Melbourne’s establishment, and his conservative views fitted the city’s post-Olympics trajectory.

“He shot from the hip,” says James Franklin, vice-president of the Australian Catholic Historical Society and a retired mathematics professor. In a 2017 paper for the St Mark’s Review Christian journal, Franklin described Pell as “a man from the south but with sceptical Sydney attitudes”.

Pell also desired to enhance what Franklin called the paltry, lagging intellectual Catholic scene in Sydney, and did so by helping to establish the Sydney campuses of the University of Notre Dame.

The close relationship the Catholic Church enjoyed with the Right faction of the NSW Labor Party gave Pell power that did not dissipate once the Liberals took over in 2011. When St John’s College at Sydney University was engulfed in scandal the following year, Pell asked for and received the ability to appoint the college’s new governing council. “It was done overnight,” says Franklin.

And Pell’s crash-through approach didn’t always win him friends, even in fast-and-loose Sydney. While he may have ingratiated himself with the city’s Catholic hierarchy and wider conservative intellectual community, Franklin suggests: “‘Ingratiating’ was not the way to describe the way he went about things.”

Plenty of people made similar observations about Pell’s manner over the years, especially after his appearances at the child sexual abuse royal commission, where he said allegations of criminal behaviour by paedophile priest Gerald Ridsdale didn’t “interest” him much at the time.

He was forced to return from the Vatican to Melbourne where he was convicted in 2018 of molesting two choir boys.

It was to Sydney’s Seminary of the Good Shepherd in Homebush that Pell rushed immediately upon his release from a Victorian prison in 2020 when the High Court overturned his conviction.

Now, perhaps fittingly, it will be St Mary’s Cathedral where he is farewelled and buried.