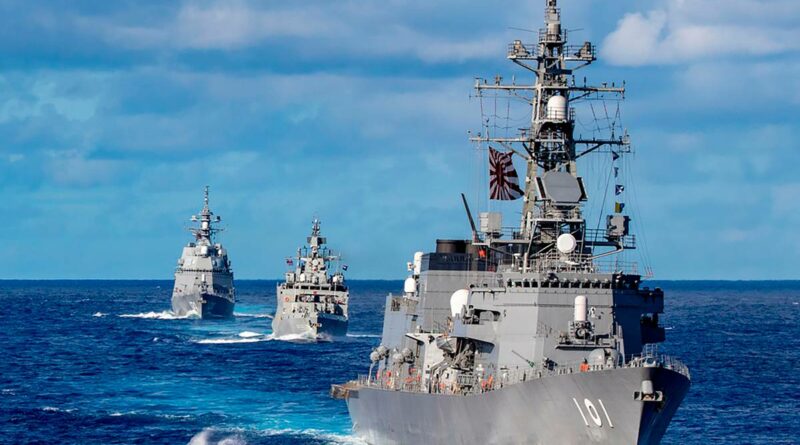 The threat China poses in the Pacific is real, and NZ must act, says ex-Australian PM and China expert Kevin Rudd. By Bernard Lagan

Australia’s former Labor prime minister, Kevin Rudd – long a scholar of China and its threat to the West – has urged New Zealand and Australia to pool military resources, beginning with joint maritime and air force patrols of the South Pacific.

“That’s not really an option in my mind. It is now necessary for both of us,” Rudd told the Listener in an interview to promote his new book, The Avoidable War. The book sets out a road map by which the former politician and diplomat hopes China and the United States might avoid war, and what he terms “global carnage on an industrial scale”.

Now president of the Asia Society – a well-funded and influential New York-based think tank – Rudd is regarded as one of the West’s foremost China experts. He did, after all, graduate from the Australian National University with honours in Chinese studies, and is fluent in Mandarin. As well as his two and a half years as Australia’s prime minister, he also served as foreign minister, before resigning from Parliament in late 2013.

“How much more New Zealand should do is a matter for the Kiwis,” says Rudd. “But I think we are all just responding to the realities. Whether it’s Tokyo, whether it’s Berlin, whether it’s Canberra – everyone’s responding to, as it were, the changing nature of the world and the region.”

The arrival next year of New Zealand’s fleet of new P-8A Poseidon maritime patrol aircraft to replace the six ageing P-3K2 Orion aircraft offers an opportunity, he believes, to combine Pacific Ocean patrol operations with Australia. It has acquired the same aircraft, based on the Boeing 737 airframe.

Australia is known to be increasingly concerned about ventures by the Chinese navy far down the Pacific.

In February, crew aboard a Chinese-guided missile destroyer, disturbed by the Royal Australian Air Force while sailing in the Arafura Sea within Australia’s northern exclusive economic zone, shone a military-grade laser into the cockpit of an Australian surveillance aircraft.

An Anzac Maritime Surveillance Command has already been suggested by the leading Australian defence think tank, the Australian Strategic Policy Institute. This proposal is based on the North American Aerospace Defence Command (Norad), set up by the US and Canada, which provides aerospace warning and protection for North America.

“It makes every piece of national security sense for us [Australia and New Zealand] to pool our national security resources wherever we can,” says Rudd. “It should begin with a comprehensive, expansive joint maritime and aerial surveillance of the South-west Pacific because that’s what our Pacific Island neighbours demand most of all – in terms of their fisheries resources and other violations.”

While New Zealand is mentioned only in passing, Rudd’s characterisation of its more benign relationship with Beijing – compared with Australia’s – is less than flattering. He writes that China has “correctly seen” New Zealand as less pro-American than Australia, and notes that it was the first developed economy with which China agreed a free-trade deal, in 2008.

Beijing, he writes, has seen New Zealand as the “soft underbelly” of US influence in the South-west Pacific ever since, and has been trying to peel us away from the Five Eyes intelligence-sharing network that includes Australia, the UK, the US and Canada. New Zealand has more recently, he says, “reluctantly” joined those opposing Beijing’s punitive economic measures against Australia.

It is unusual for Australian politicians – either current or former – to offer such a candid public assessment of their trans-Tasman neighbour’s foreign policy. Rudd hastens to add he does not share Beijing’s assessment. Nevertheless, he notes that China has continued its punitive actions towards Australia while upgrading its free-trade agreement with New Zealand, due to take place in April.

“It’s quite plain that Beijing views this as a, shall we say, strategy which should continue to be deployed.”

Thirty-three years ago, Rudd was a young Australian diplomat wandering Tiananmen Square in the centre of Beijing talking to Chinese students as they massed in support of democracy, freedom of the press and freedom of speech. At the height of the protests, about one million people assembled in the square – until early June, when troops and tanks rolled in. Hundreds, or perhaps even thousands, were killed, snuffing out the so-called ’89 Democracy Movement in a grisly crackdown that shocked the world.

Rudd has been haunted by what he witnessed as China, in his words, “met a massive national inflection point”, but it is an experience he values. “When movements in politics and history are described in history books, it’s one thing. When you’ve been there and spent a better part of a week talking to kids in their twenties – and sometimes in their teens – about their hopes for a democratic future, it puts flesh and blood around the bones of strategic analysis.”

That brief demand for democracy he saw in Tiananmen Square is now just a flicker, Rudd says. In the past 10 years in particular, there has been what he calls a massive propaganda effort by the authorities under Xi to promote Chinese nationalism. It has caused the younger generation to be much more patriotic than their predecessors.

The propaganda campaign has been intense, long-lasting and permeated all Chinese educational institutions. For example, there is now a school-based curriculum on “Xi Jinping thought” in primary schools, high schools and universities. Part of the campaign has been to denigrate liberal democracy as a Western construct.

The most likely flashpoint for war in this environment is over the island nation of Taiwan. Should – or more accurately, when – Xi moves to retake the island of more than 23 million people, armed and potentially nuclear conflict could erupt with the US.

Rudd would like to see Washington and Beijing set up mechanisms similar to those created between Washington and Moscow after the 1962 Cuban missile crisis put the world on the cusp of all-out nuclear war.

His proposal is that the president of each country should nominate two or three of their most trusted top officials to meet to identify a limited number of strategic red lines that cannot be crossed. These might include cyberattacks on specified critical infrastructure, conduct in the South China Sea, treatment of Taiwan, or military deployments. These “red lines” would be agreed in secret.

Could the avoidable war that concerns Rudd already have begun in the Russia-Ukraine conflict?

Rudd finds it difficult to believe that China did not know in advance of Russian President Vladimir Putin’s plans. He struggles to understand how Putin could have risked leaving Xi completely in the dark, given that Russia is now increasingly dependent on China politically, diplomatically, economically and perhaps even militarily.

Yet Rudd believes we are not yet on the cusp of an avoidable war. “With China, it is a different set of historical circumstances and a different set of, shall I say, current realities. And at this stage, Xi Jinping does not have an immediate military or political timetable to retake Taiwan.”

Taiwan is probably safe until at least the end of the decade, he believes. But beyond that, “the balance of military power between China and the United States will, in Beijing’s estimation, be more advantageous to the Chinese”.

• The Avoidable War: The dangers of a catastrophic conflict between the US and Xi Jinping’s China, by Kevin Rudd (Hachette, $39.99)