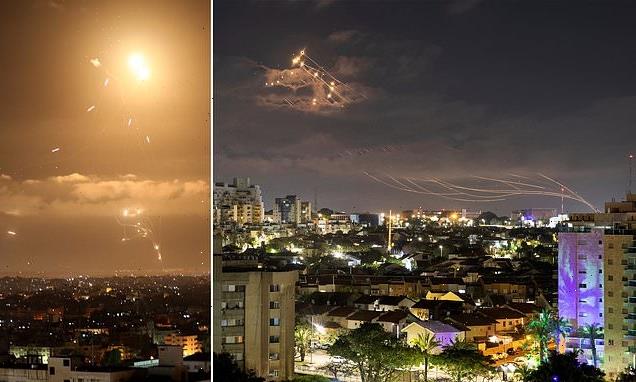 Israel responded by launching air strikes in the early hours of Thursday, prompting further launches of at least four rockets by militants in the besieged territory.

One rocket from Gaza on Wednesday evening fell harmlessly in a garden in the southern Israeli city of Sderot, police said.

In retaliation, Israel said its jets had targeted a military post and a tunnel complex ‘containing raw chemicals used for the manufacturing of rocket engines’.

Hamas, the Islamist movement which rules the Gaza Strip, said it had fired surface-to-air rockets at Israeli planes.

Pictures showed streaks of light tracing across the sky above the Israeli town of Ashkelon that lies next to the country’s border with Gaza – the Palestinian enclave on Israel’s eastern Mediterranean coast.

Explosions lit up the night sky as the Israeli Iron Dome air defence system intercepted and destroyed the in-coming rockets. 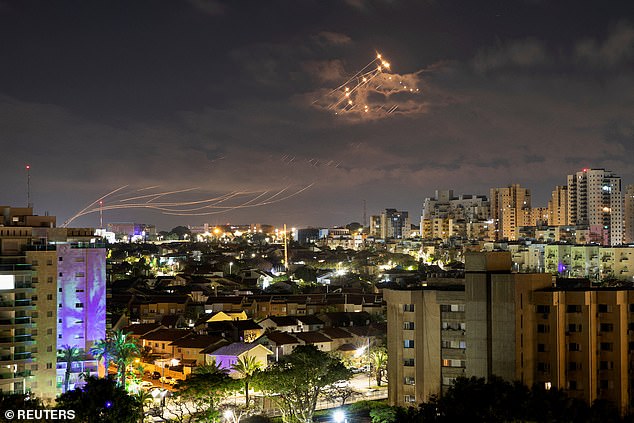 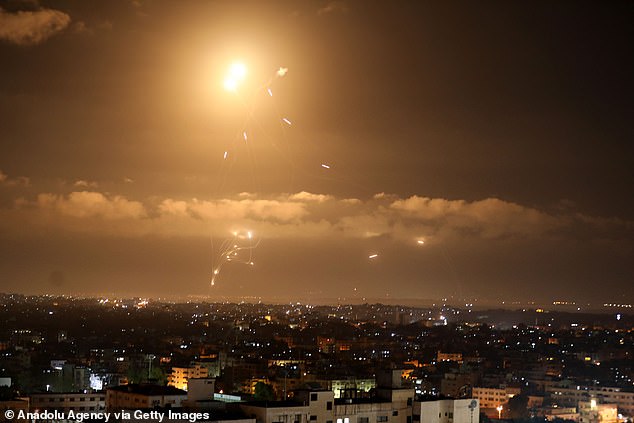 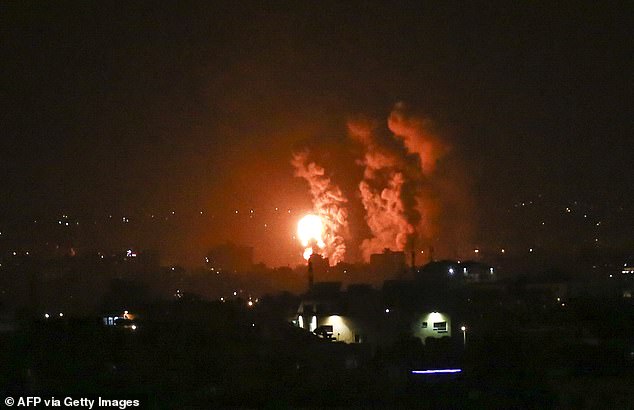 The exchanges come after nearly a month of deadly violence in Israel and the Palestinian territories, focused on Jerusalem’s flashpoint Al-Aqsa Mosque compound, known to Jews as the Temple Mount.

Israeli police said Thursday that dozens of rioters had thrown stones and petrol bombs from the mosque.

‘A violent splinter group is stopping Muslim worshippers from entering the mosque and causing damage to the site,’ the police alleged.

Seven Palestinians, all residents of Israeli-annexed east Jerusalem, had been arrested on suspicion of taking part in ‘violent incidents’ on Wednesday, it added.

Hours earlier, Israeli police had blocked crowds of Jewish ultra-nationalist protesters from approaching the Muslim quarter of Jerusalem’s Old City, aiming to head off an escalation after four weeks of violence that have left at least 36 people dead.

Last year, a similar ultra-nationalist march had been scheduled in the Old City when Hamas launched a barrage of rockets towards Israel, sparking the 11-day war.

The fighting resulted in hundreds of deaths, including 256 in the Gaza Strip and 13 in Israel – including 12 Israeli civilians and two Thai nationals. At least half of those killed in Gaza were also civilians, killed in air strikes. 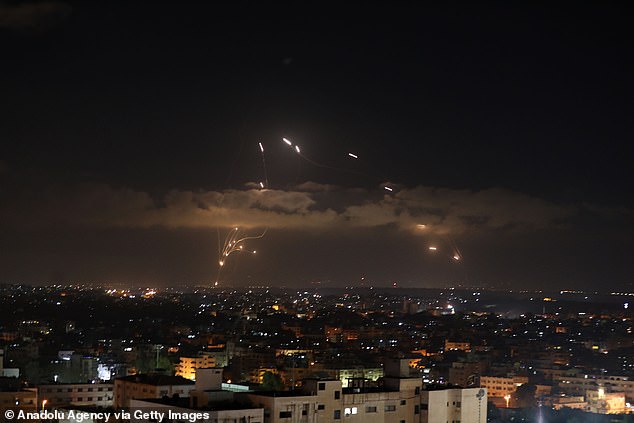 Following the rocket launches, Israel said its jets had targeted a military post and a tunnel complex ‘containing raw chemicals used for the manufacturing of rocket engines’ 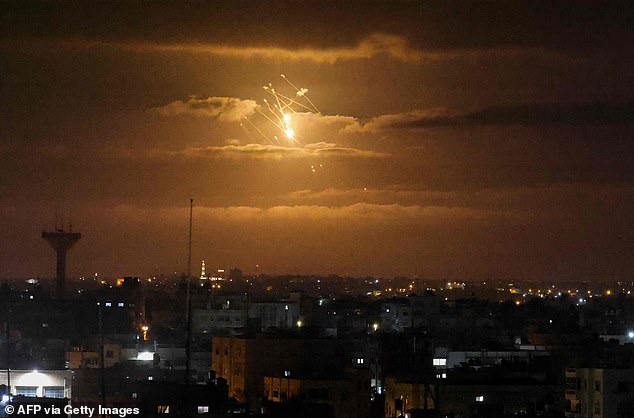 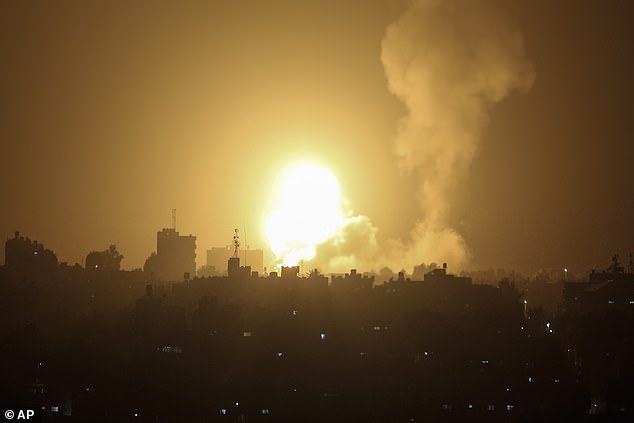 An explosion is caused by Israeli airstrikes on a Hamas military base in town of Khan Younis, southern Gaza Strip, April 19, 2022

Early Wednesday evening, more than 1,000 ultra-nationalist demonstrators waving Israeli flags had gathered, some shouting ‘death to the Arabs’, but police blocked them from reaching Damascus Gate and the Old City’s Muslim quarter.

Far-right lawmaker Itamar Ben Gvir, a controversial opposition politician, led the protest after being barred from the Damascus Gate area earlier in the day by Prime Minister Naftali Bennett.

‘I’m not allowed to enter Damascus Gate,’ the former lawyer said. ‘Based on what law?’

Bennett said earlier that he had blocked the rally for security reasons.

‘I have no intention of allowing petty politics to endanger human lives,’ he said.

‘I will not allow a political provocation by Ben Gvir to endanger IDF (Israeli army) soldiers and Israeli police officers, and render their already heavy task even heavier.’ 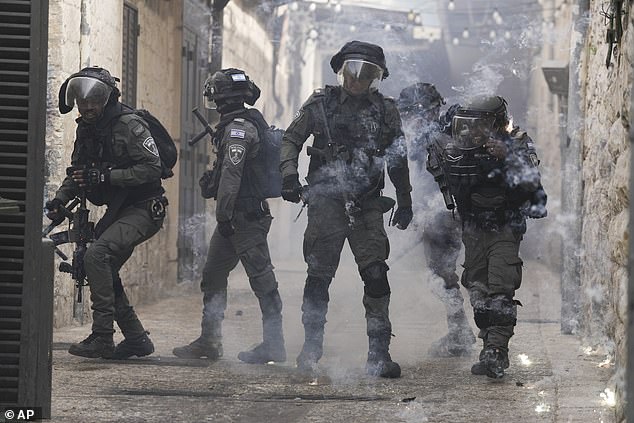 The exchanges come after nearly a month of deadly violence in Israel and the Palestinian territories, focused on Jerusalem’s flashpoint Al-Aqsa Mosque compound, known to Jews as the Temple Mount. Pictured: Palestinians shoot fireworks at Israeli police, April 17 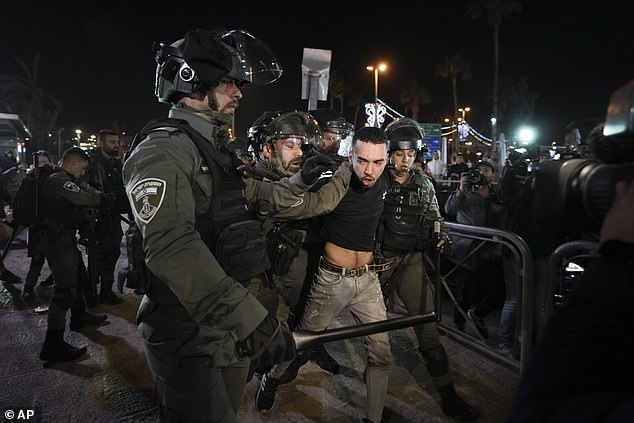 Israeli border police officers detain a protester during clashes between Israeli security forces and Palestinians next to Damascus Gate, outside the Old City of Jerusalem, during the Muslim holy month of Ramadan, April 4, 2022 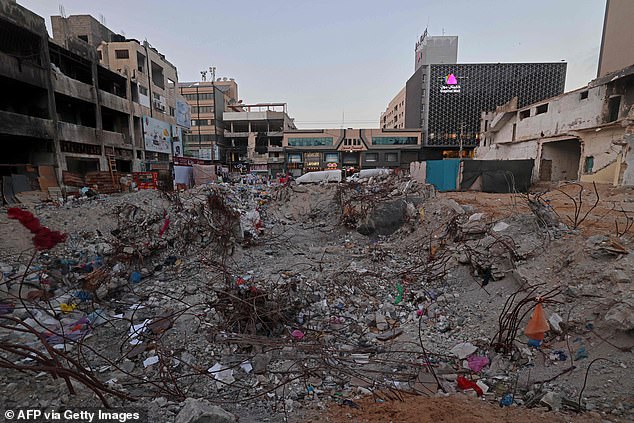 Pictured: The remains of the Shorouq building, levelled by an Israeli air strike during the May 2021 conflict between Israel and Hamas, in Gaza City on April 19, 2022

Tensions are high as the Jewish Passover festival coincides with the Muslim holy month of Ramadan.

A total of 23 Palestinians have been killed since March 22, including assailants who targeted Israelis, according to an AFP tally.

On Tuesday, Israel carried out its first strike on Gaza in months, in response to the first rocket since January from the Palestinian enclave.

UN chief Antonio Guterres said he was ‘deeply concerned by the deteriorating situation in Jerusalem’.

He added that he was in contact with the parties to press them ‘to do all they can to lower tensions, avoid inflammatory actions and rhetoric’.

Bennett, himself a right-winger and a key figure in Israel’s settlement movement, leads an ideologically divided coalition government.

His coalition this month lost its majority in the 120-seat Knesset, Israel’s parliament, after a member left in a dispute over the use of leavened bread products in hospitals during Passover.

Then on Sunday, the Raam party, drawn from the country’s Arab-Israeli minority, suspended its support for the coalition over the Al-Aqsa violence.

Right-wing lawmakers are under pressure to quit Israel’s government, which is seen by some on the right as being too favourable to Palestinians and Israel’s Arab minority.