A church attack in Nice is the latest in a series of atrocities France has suffered in recent years.

Here is a timeline of attacks that have left French citizens shocked and changed the nation: 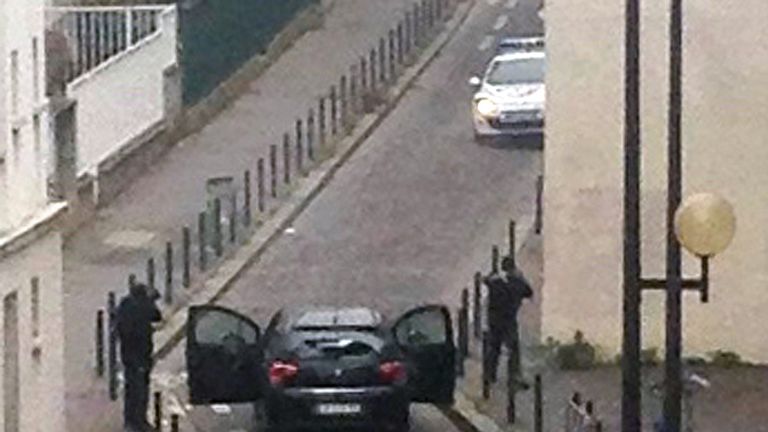 Two masked gunmen walk into the Charlie Hebdo’s offices, a satirical weekly newspaper, and kill 12 people, including cartoonists they single out and call by name.

The magazine’s editor, Stephane Charbonnier, known as Charb, is among the victims.

The gunmen, later identified as brothers Cherif and Said Kouachi, shout “Allahu Akbar” (“God is greatest”) while carrying out the attack, and say they belong to a Yemeni branch of Islamist terror group al Qaeda. 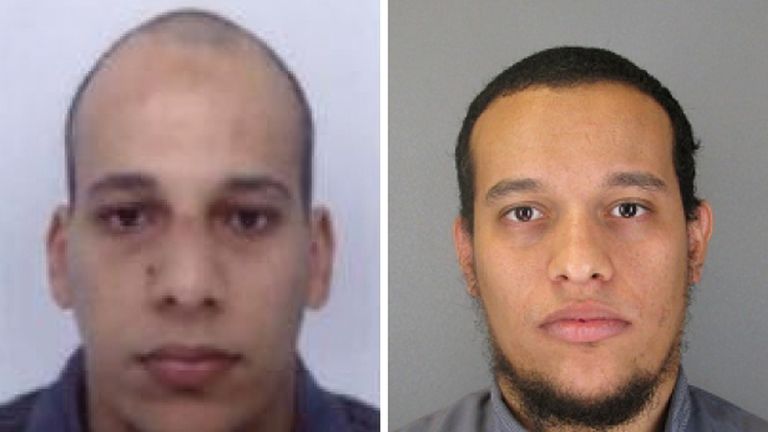 The attackers escape and Paris is put under maximum alert.

A shooter, later linked to the Kouachi brothers, kills a policewoman in Montrouge, and shoots a man, injuring him. 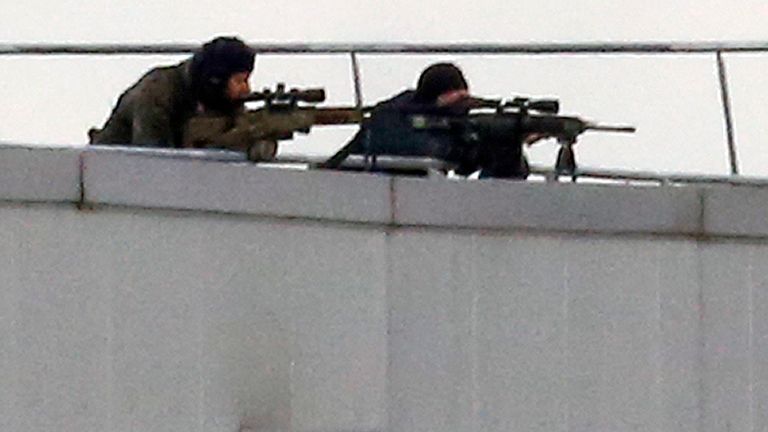 The Kouachi brothers, with police behind them in a high-speed chase, seek refuge in an industrial complex at Dammartin-en-Goele, a town 35km (22 miles) northeast of Paris.

Hundreds of police and special forces besiege the complex, with the brothers holed up inside.

Reports emerge that in the French capital a gunman is holding several people captive in a kosher supermarket, threatening to kill the hostages unless the Kouachi brothers are set free.

The gunman is identified as Amedy Coulibaly – the same person who had been responsible, with accomplice Hayat Boumeddiene, for the killing of the policewoman in Montrouge. Boumeddiene remains at large. 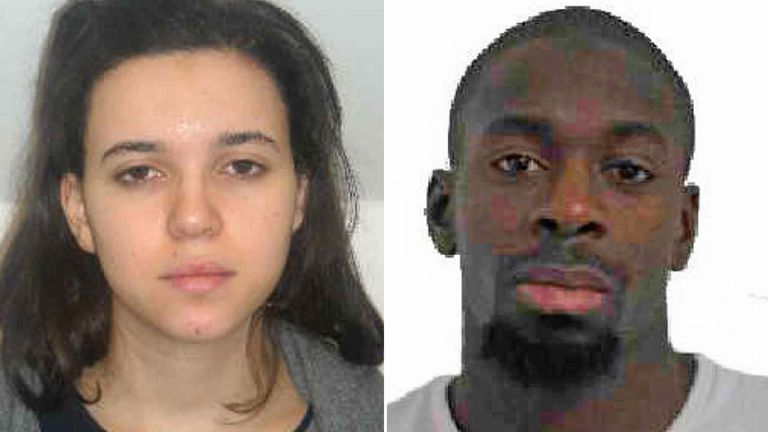 Elite forces storm the supermarket and kill the gunman. They free 15 hostages, and also find the bodies of four people. 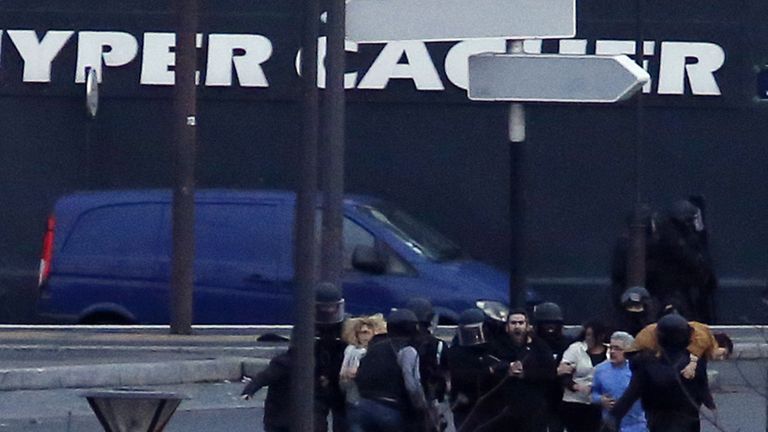 Around the same time, the stand-off in Dammartin-en-Goele comes to a brutal close. Amid gunshot and explosions, the Kouachi brothers come out of the building firing at police and are killed.

Dozens of world leaders and hundreds of thousands of people join a rally of national unity in Paris, while millions of people on social media express their support through the Je Suis Charlie hashtag. On a train from Amsterdam to Paris, a shooting and stabbing attempt is stopped by passengers. 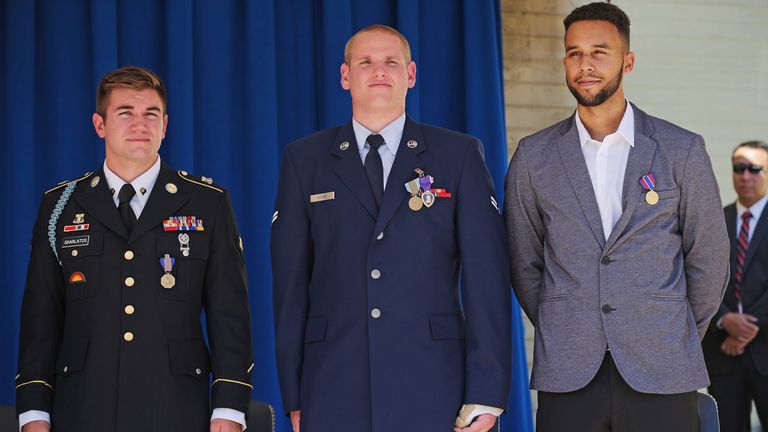 Three Americans, including two off-duty members of the US Armed Forces, are among those who intervene to subdue the assailant, identified as Moroccan Ayoub El Khazzani.

A series of coordinated attacks hit the French capital, in an act of terror later claimed by the Islamic State group. 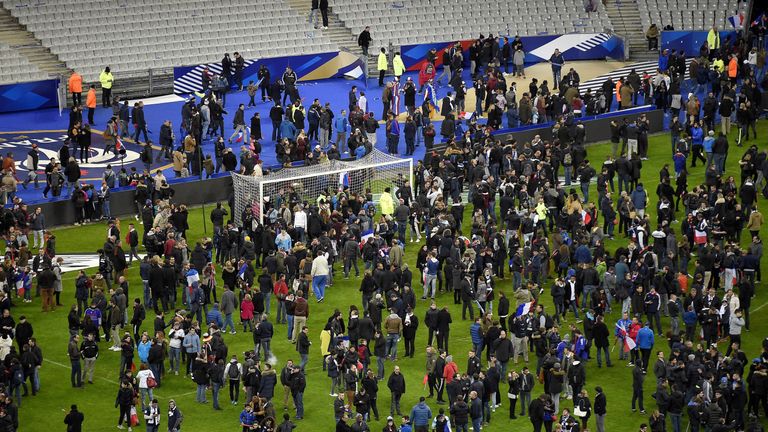 Three suicide bombers blow themselves up outside the Stade de France in Saint-Denis, Paris, where France are playing Germany in a friendly.

President Francois Hollande, in the stadium for the match, is escorted to safety.

In the centre of town, gunmen travelling in a black Seat open fire outside a bar and restaurants – shooting randomly at diners.

Another suicide bomber blows himself up outside a restaurant. 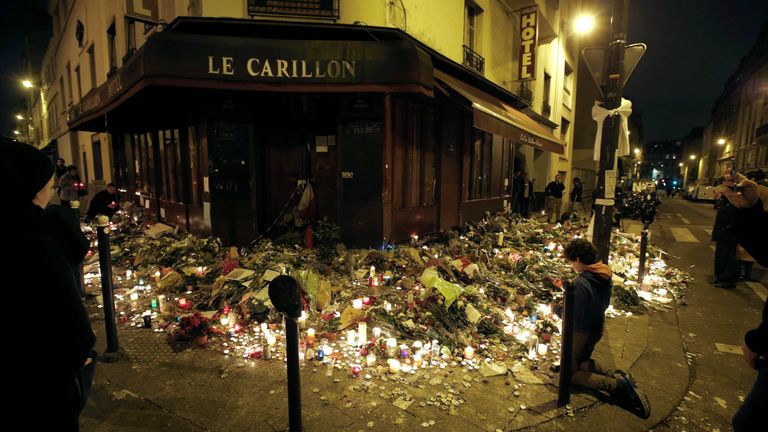 At the Bataclan nightclub, where the rock group Eagles of Death Metal are playing, attackers wearing suicide belts storm the club, opening fire among a crowd.

Dozens are killed and scores are injured, as others try to save their lives by jumping out the windows or playing dead among the crowd. 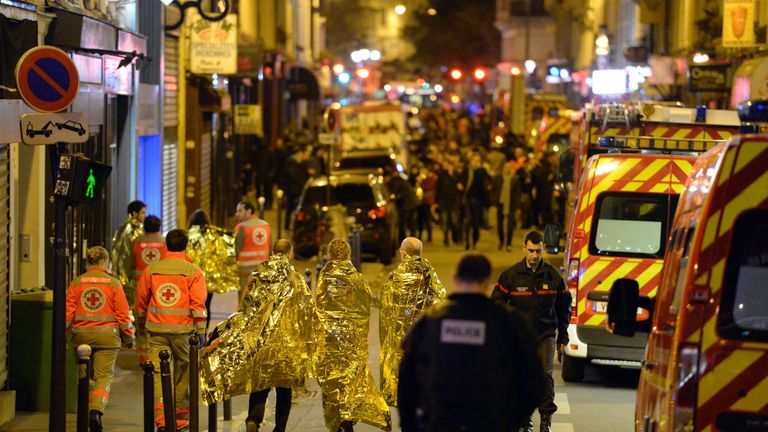 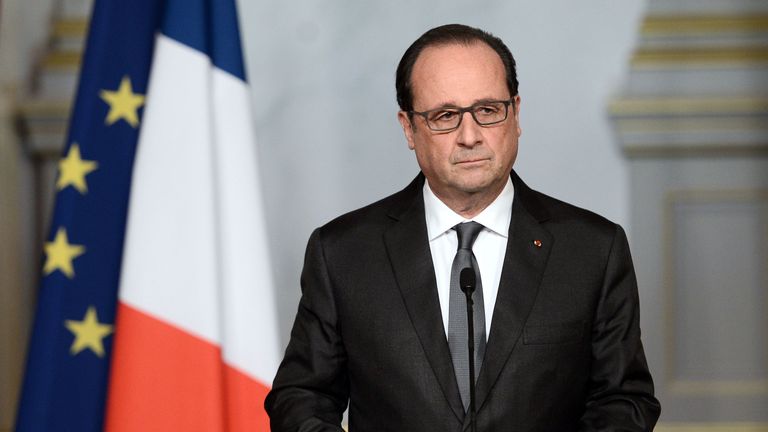 After a stand-off French forces storm the club. The three attackers are killed – one shot by police and two when they blew themselves up.

In the deadliest attack in France since World War II, a total of 130 people are killed, including 89 at Bataclan.

Mr Hollande calls the attacks an “act of war” organised by Islamic State.

A man who swore allegiance to Islamic State stabs to death 42-year-old policeman Jean-Baptiste Salvaing outside his home in Magnanville, about 35 miles (55km) west of Paris.

The attacker, identified as Larossi Abballa, then takes the policeman’s partner hostage, together with the couple’s three-year-old son. The woman is killed while the boy is unharmed.

Police say Abballa filmed the attack and posted it on Facebook. 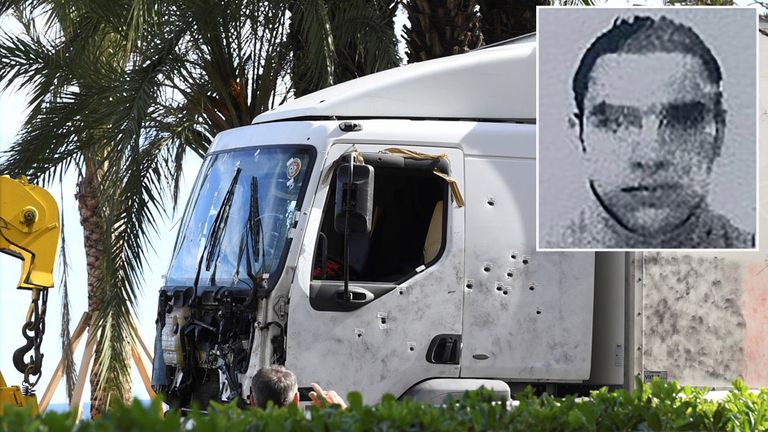 A lorry ploughs into a crowd celebrating Bastille Day on the Promenade des Anglais in Nice. The attack, which sends panicked revellers, many with children, scrambling for safety, kills 86 people, and hundreds more are injured. 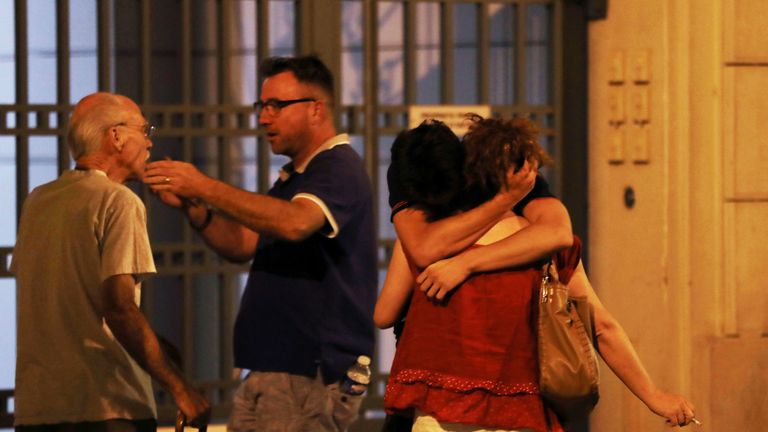 French Catholic priest Jacques Hamel, who is celebrating Mass in his parish in Normandy, is killed when two gunman storm the church. 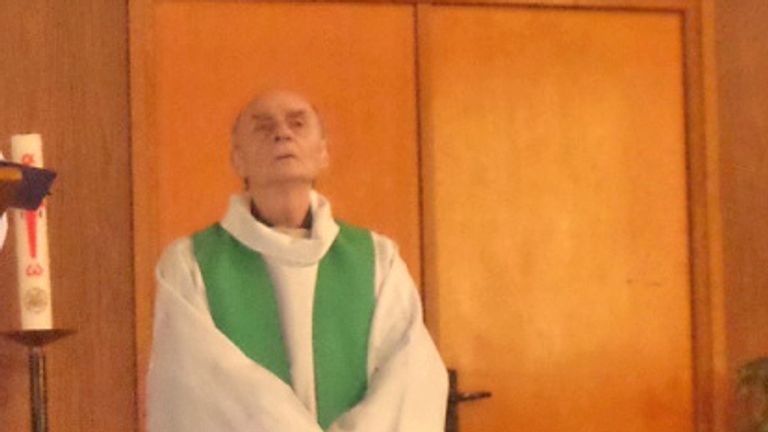 The men pledge allegiance to Islamic State before forcing Father Hamel, 85, to kneel. They slit his throat and also stab one of the parishioners.

The gunmen, Adel Kermiche and Abdel Malik Petitjean, are killed as they leave the church, shouting “Allahu Akbar” and using the nuns as human shields. A man is shot to death after attempting to seize a soldier’s weapons at Orly Airport in Paris.

“I am here to die for Allah. There will be deaths”, he shouted before being gunned down. On his way to the airport, the man, a 39-year-old-radicalised Muslim known as Ziyed B, shot a policeman who stopped him at a road check, then held a woman motorist at gunpoint and stole her car to drive to Orly.

A police officer is killed and two others seriously injured after a gunman opens fire in one of the most popular areas of Paris.

The attacker got out of a car that pulled up next to a stationary police van on the Champs-Elysees and immediately started shooting at officers.

A female tourist was also wounded in the attack, which is investigated by anti-terror police. A man armed with a hammer and kitchen knives attacks police officers outside Notre Dame cathedral in Paris.

One officer suffers minor neck injuries during the assault in the cathedral’s courtyard before the lone attacker is shot and wounded.

French interior minister Gerard Collomb said the attacker carried the ID card of an Algerian student and cried: “This is for Syria.” Adam Dzaziri, 31, drives into a police car on the Champs-Elysee, with a Kalashnikov rifle, handguns and gas bottles later found in his white Renault Megane.

He was on the terror watch list, sources close to the investigation said. 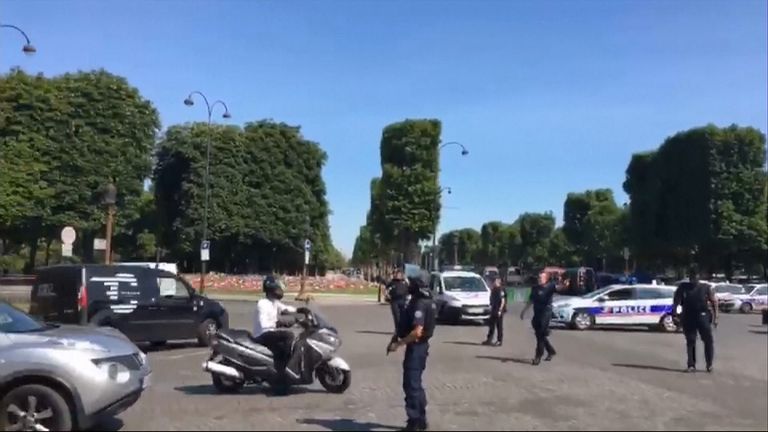 9 August 2017 Soldiers attacked on a motorway

Hamou B, a native of Sartrouville, Yvelines, rams his BMW into a group of French soldiers in western Paris before speeding off.

Six of a dozen or so troops are injured in the attack – three of them seriously – in the Levallois-Perret suburb of the city.

The attacker had been waiting in the dark-coloured car in an alleyway before driving at speed at the troops as they left their barracks to go on patrol at around 8am local time. 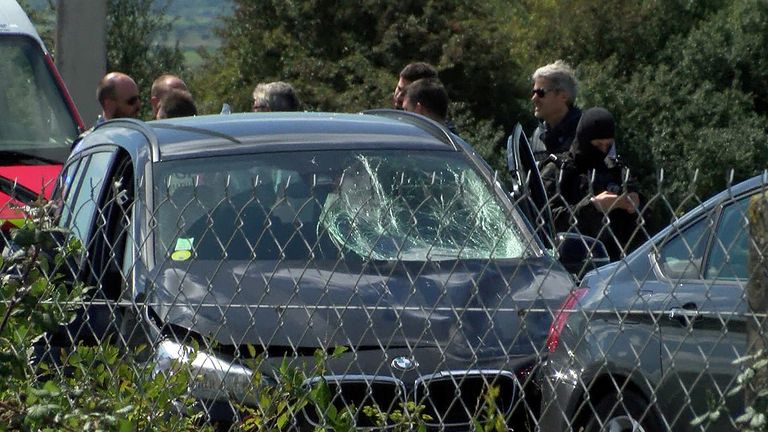 Two women are killed by a knifeman in a terror attack at Marseille’s main train station.

The attacker is shot dead by soldiers who were patrolling inside the Saint Charles railway station.

Islamic State’s propaganda arm put out a statement claiming it was behind the attack.

A witness said she saw a man take out a knife from his sleeve and then stab a young girl and then a second woman before shouting “Allahu Akbar” (God is Greatest). He is shot dead in a raid on the supermarket by police.

He was known to police but was not considered to be a terror threat. 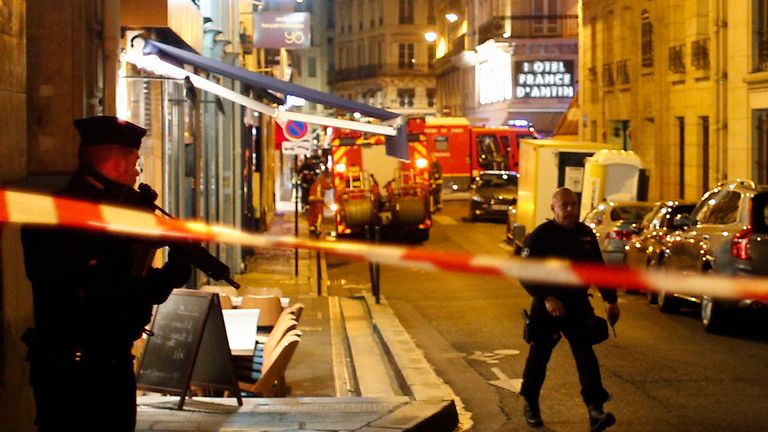 One person died and four others were injured by a knifeman who Islamic State claimed was one of its “soldiers”.

The attacker was shot dead by police.

The incident happened just before 9pm in Rue Monsigny in the French capital’s second arrondissement where Paris’s opera and landmark retail stores are located. Two people were wounded after a stabbing near the former offices of satirical magazine Charlie Hebdo. A man who was originally from Pakistan was arrested over the attack. Teacher Samuel Paty, 47, was decapitated in the streets of Paris after he showed cartoons of the Prophet Muhammad in a class to 13-year-olds about freedom of expression.

His killer – Chechen Abdullakh Anzorov, 18 – was shot dead by police after the attack. It was reported that three people had died – including one woman who was decapitated – at the Notre Dame church in the southern city of Nice.

Police said they shot the suspect who is now in custody in hospital.