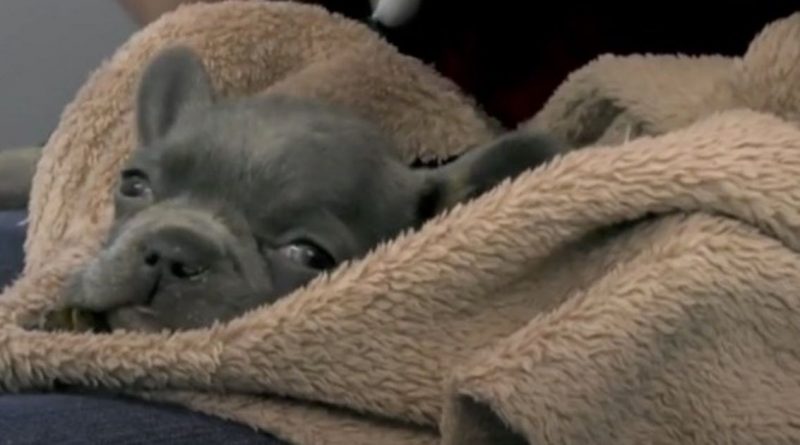 Heart-wrenching footage shows a tiny French bulldog puppy crying for his mum after being abandoned by a breeder in Thursday's episode of The Dog House on Channel 4 (March 11).

The little puppy, called Kevin, was the runt of the litter and failed to thrive which saw him get left at Wood Green animal centre at the tender age of just six weeks.

Footage shows Kevin trembling in his blanket as he arrives at the Cambridgeshire-based shelter after initially being taken in by a vet.

Explaining little Kevin's issues, a worker says: "He or she stopped eating on Saturday so he became quite dehydrated quite quickly, quite poorly.

Thankfully, Kevin quickly found his feet at the shelter, despite missing his mother and littermates, and he found his forever home with a fun-loving couple who are smitten with him.

Ryan fears he and his partner Katie can't have children because he is a cancer survivor and had to undergo chemotherapy.

Fortunately, after they are matched with Kevin he quickly fills their home with mischief and love.

Ryan jokes the puppy has "my ears" but says his squashed face is more like Katie's.

"It is just like having a baby," says Katie, while Ryan jokes it is the pup who "wears the trousers" in the house.

Ryan says: "He didn't have a nice start in life but he has bounced back fantastically well."

"I feel so fortunate to have him, to have him on our team," Katie adds, while Ryan appears to get a bit emotional and well up with tears.

Ryan says: "It's very hard not to dote on a tiny little puppy like that."

This comes after a puppy born with a disability started to make a miraculous recovery in the care of a "foster mum" dog.

The Dog House is on Channel 5 at 8pm on Thursdays.