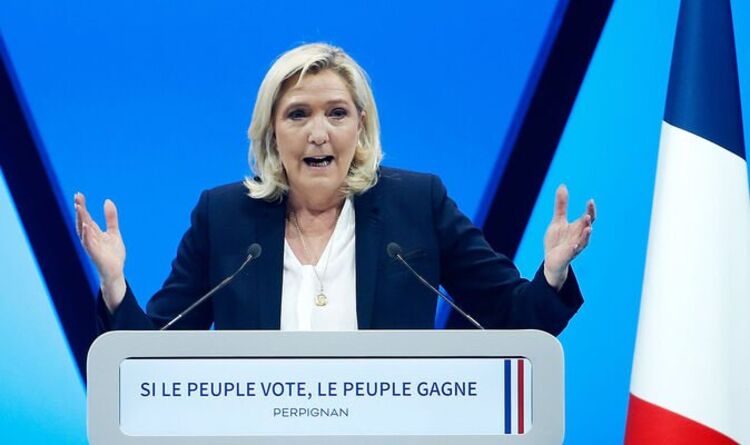 Marine Le Pen is closing in on French President Emmanuel Macron as France goes to the polls for the first round of the election. A new YouGov survey this week shows that 56 percent of voters aged 18 to 24 would back Ms Le Pen. Other polls project Ms Le Pen taking 47 percent of the vote to Mr Macron’s 53 among the general population – meaning Ms Le Pen is a lot closer to the presidency than she has been before. The French election could have huge ramifications in Europe, as the far right figure has railed against Brussels for much of her career.

In an interview earlier this year, Ms Le Pen made it clear that she intends to fight institutions that work “without the people, and even against the people” and transform the EU into “an association of free nations”.

Her goal is to convert the EU into “a space of partnership between free and independent visions”, party spokesperson Julien Odoul, told EURACTIV France

Ms Le Pen also wants the European Commission to lose what she describes as some of the “unconstitutional” powers it has given itself.

During a press conference in Paris, Ms Le Pen described Mr Macron’s EU project as “unrealistic, dangerous” and “the antithesis” of her own.

She also accused him of being “Mrs. Merkel’s flunky” and attacked him as being the only leader in the bloc who has not used the rotating presidency of the EU to push “his country’s interests.”

The National Rally leader’s views on the EU have shifted over the years.

She was a big backer of Brexit abroad, and was even calling for France to have a vote on its own EU membership.

However, after losing the 2017 French election, Ms Le Pen ditched calls for a ‘Frexit’ referendum.

In January 2019, the opposition figure in France said she would support the UK rejoining a “reformed” EU.

Speaking to the Sunday Times, Le Pen said that she regretted “a little” the fact that Britain would not be around to help change the EU from within.

She said: “Britain voted to leave the EU — it did not vote to leave Europe.

“An alliance of European nations will be the future and the UK could come back. The choice should be between leaving and staying in a reformed EU.”

Ms Le Pen also said in the interview that former Prime Minister Theresa May failed to get Brexit done because she was “playing the game of the EU.”

She added: “Money should not be the driver of everything. We are citizens of somewhere, not citizens of nowhere. We cannot waste this by multiculturalism.

“It is the nation, the nation state. Only the EU cannot see it.”

In February 2020, Ms Le Pen told Euronews: “Maybe Great Britain can rejoin us once we’ve built something where each nation conserves their freedom.

“[Brexit] still took three years … there was a real contempt for the people on the part of leaders of the European Union who barely hid wanting to make the divorce as difficult as possible.”

Another far right candidate in this year’s French election is Eric Zemmour.

He presented a similar plan for Europe as Ms Le Pen.

Mr Zemmour said that while he will not advocate for Frexit, he will try to renegotiate the Schengen agreement and, “if necessary”, withdraw from the European Convention on Human Rights.