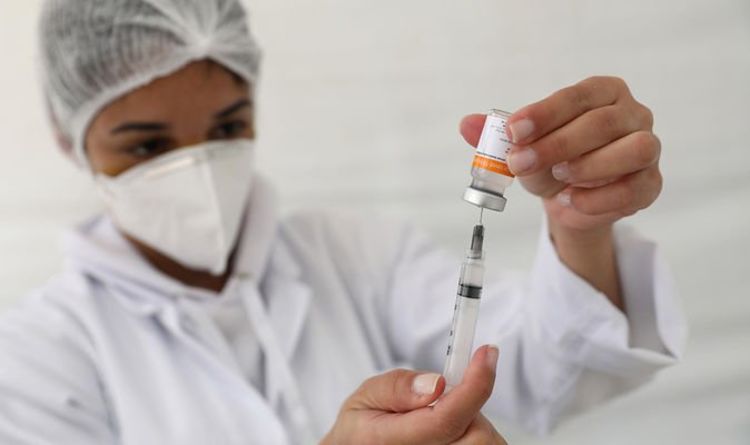 A fact-checking report on France24 rejected claims that Brexit had enabled Britain to move faster on vaccines than the EU. It added that “British citizens, both Brexiteers and Remainers, have the EU to thank” for vaccines. The clip debunked claims from former Health Secretary Matt Hancock, who claimed in December last year that his Government had been able to move faster than its EU neighbours because of Brexit.

At the time, Mr Hancock told Times Radio: “Because of Brexit we have been able to make a decision based on the UK regulator.

“And not go at the pace of the Europeans who are moving a little bit more slowly.”

The France24’s ‘Fact or Fake’ report said: “That is false.

“The UK did become the first Western nation to start vaccinating.”

The report continued: “But in fact, it was an EU rule that allowed the UK to get a head start on other member-states that could have used it if they wanted to.

“Vaccines do need to be approved for use within Europe by the European Medicines Agency.

“But all member states can use an emergency measure to temporarily authorise vaccines for their citizens in a pandemic.

“If British citizens have access today to the vaccine, it is thanks to EU funds.

“In June, the European Investment Bank loaned the German lab BioNTech 100 million euros to ramp up production of its vaccine development.

“So in reality British citizens, both Brexiteers and Remainers, have the EU to thank for something.”

As of July 15, the UK has vaccinated 68 percent of its population with at least one dose of a Covid vaccine, while 52.36 percent have been fully vaccinated with two doses of the vaccine.

This means the UK has the highest proportion of its population fully vaccinated, closely followed by Canada and Israel which have also had a highly successful vaccine programme.

However, vaccine uptake has been mixed across Europe, with leaders turning to enforcement across many member-states.

Earlier this week, both Germany and France followed Britain’s lead by making Covid-19 vaccinations compulsory for all healthcare workers.

Mr Macron went further and insisted French people now have to show that they are either vaccinated or that they recently tested negative for the virus to enter cafés, restaurants, cinemas, high-speed trains or shopping malls.