Home » World News » ‘From a paddock to CBD’: More than $1 billion dedicated to Sydney’s future city

Work on Sydney’s third city centre will begin this year with the NSW government committing more than $1 billion to the early development of the western airport city Bradfield.

The funding, which forms part of next week’s state budget, will be used to transform paddocks and grassland into a global city centre, NSW Premier Gladys Berejiklian said. 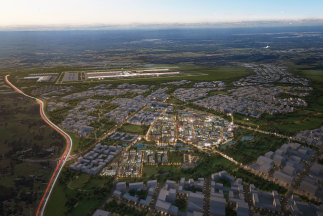 An artist impression of the future western Sydney city Bradfield.Credit:Suppplied

More than $900 million of the cash will fund enabling works on the land near Bringelly, including remediation of the site and basic infrastructure.

“Work is set to begin to turn what is essentially a paddock today into a thriving global city centre,” Ms Berejiklian said, adding the city would eventually support more than 17,000 skilled jobs.

“The Aerotropolis is about NSW owning the economic future and creating the jobs our economy will need to keep growing after COVID-19,” he said. 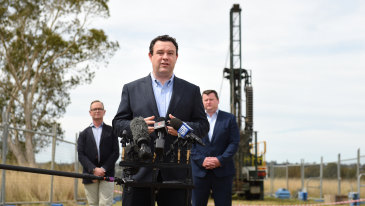 “This will set up western Sydney to power the national economy into the next century.”

He said the city would have a focus on science, technology engineering, and mathematics industries.

More than $50 million will be set aside for construction of the first building in the city, a facility with shared-use equipment for research institutions and industry.

The government estimates the project will create 200,000 jobs across the Western Parkland City. 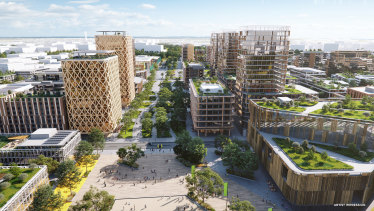 An artist’s impression of Bradfield.

The city was named after John Bradfield, a renowned engineer who designed and oversaw the construction of both the Harbour Bridge and Sydney’s original railway network.

Bradfield was selected after the community was asked to have a say, with a panel settling on the final decision to honour John Bradfield’s enduring city-shaping impact on Sydney.

Bradfield will be roughly 60 per cent of the size of Sydney’s original CBD. Treasurer Dominic Perrottet described it as the “next jewel in Sydney’s crown”.

“This investment will create a precinct that will be home to businesses and industries that will create jobs not just today, but into the future as well,” he said.

The city will sit near the future Western Sydney International airport, which is set to open in 2026. An $11 billion metro rail is being constructed to service the area, as well as the $2 billion M12 motorway.

An independent analysis of the metro questioned the state government’s decision to push ahead with the project, and found its benefits did not justify the price tag.