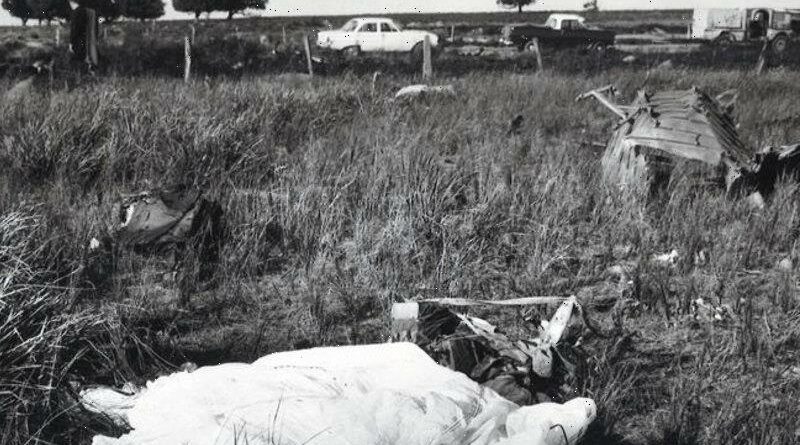 Six of the R.A.A.F.’s top pilots were killed yesterday when four Vampire jet trainers plunged into the ground and exploded nine miles from East Sale air base during aerobatic-flying training. 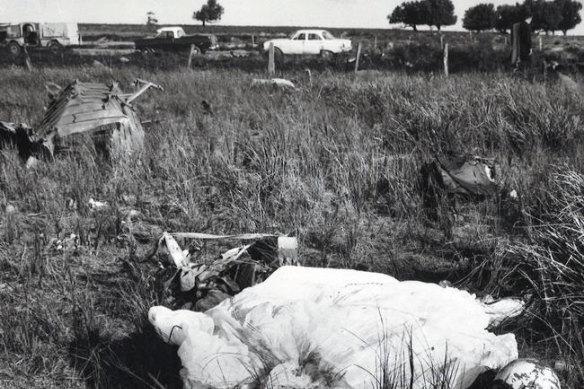 “Small pieces of metal were scattered over half a square mile…” The scene of the tragedy on August 15, 1962.Credit:File

The men, all married, were members of a precision aerobatic team known as the Red Sales.

The planes crashed in a blinding flash and a huge sheet of flame and exploded in pieces which were scattered over hundreds of square yards.

The pilots, who were members of the Central Flying School at East Sale air base, were practising for an air display for Air Force week, from September 9 to 16.

The planes took off from East Sale base at 1:44 p.m. and crashed 20 minutes later.

Eyewitnesses said the planes crashed near an R.A.A.F. rocket range as they manoeuvred through a barrel roll, a highly dangerous aerobatic movement.

Soon after the crash, police and R.A.A.F. guards set up road blocks a quarter of a mile apart to seal off the wreckage.

They turned back sightseers and souvenir hunters, who ventured too close to the roadblock area.

Police said the area would be closely guarded until investigating officers could examine the wreckage.

Late last night acrid fumes of burnt aircraft fuel were still in the air around the area.

The Director of Flying Safety (Wing-Commander F. Inger) flew from Canberra in a R.A.A.F Dakota to Sale yesterday to take charge of the investigations into the accident.

Pilots of the Red Sales team have thrilled thousands of people with the skilful rolls and demonstrations at Edinburgh (South Australia) and Tasmania.

An R.A.A.F. spokesman said “the members of the Central Flying School are regarded as the best pilots in the air force.”

Each pilot had been a member of the school for periods from 12 months to two years.

Flight Lieutenant Burke was the pilot of the fourth jet, with Flying Officer Gow as passenger.

Two eyewitnesses of the crash last night gave their account of the disaster.

Mr Gordon Jackson, of Dundas Street, Sale, was one of a six-man P.M.G. team correcting a cable fault at the R.A.A.F. rocket range, about a quarter of a mile from where the aeroplanes came down.

“We had stopped work for a moment to watch the jets in formation, and were talking about how well they stayed in line,” Mr Jackson said.

“Suddenly the leading jet swerved to come in low, there was a terrific flash, and it was all over.”

Mr Jackson said the jets crashed into sanitation fields on the south side of Dutson Road, then exploded in pieces which landed hundreds of yards away on the north side of the road.

“We ran to our trucks, cut through wire fences and raced to the wreckages, but there was nothing to be done,” he said.

A former R.A.A.F. pilot (Mr N. H. Wadlsey), of McColl Street, Dale, now a cartage contractor, said he first saw the aircraft as he was driving from a house on Dutson Road.

“I stopped to watch the jets as they swooped in towards me. They were in tight formation, but seemed too low to the ground,” he said.

“Then the leader rolled low, crashed into the field, and the other three followed.

“There was a blinding flash, and a huge sheet of flame. It was the worst air crash I have seen in years of flying.”

When overhead wires came down in the smash the P.M.G. work team rushed to a nearby house and installed an emergency line to contact Sale.