Home » From the Archives, 1976: The Great Bookie Robbery 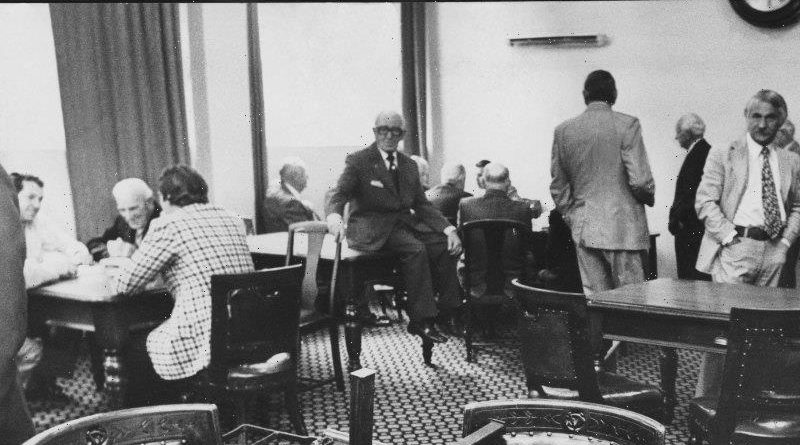 Police believe gunmen who netted at least $1,340,000 in a raid on the Victorian Club yesterday had been watching the building for more than a week. 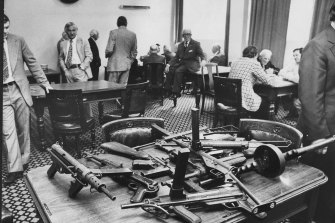 Senior detectives believe the bands may have set up cameras on the vacant third floor of an office block opposite to film cash deliveries.

The Scottish Amicable Life Association building has clear views of the bookmakers’ settling room on the second floor of the club in Queens Street.

Bandits made a clean getaway. But police late last night were investigating a report that they had an accomplice in a car parked in Queen Street, near Collins Street.

Late last night dozens of detectives from the armed robbery, homicide and consorting squads were working on the robbery, the biggest in Australia’s history.

Detectives raided underworld haunts, but there were no new leads.

Late last night Mayne Nickless announced a record $70,000 reward for information leading to the capture and conviction of the bandits.

The robbery, expertly timed, began when a bogus workman arrived at the club at 12.07 to repair a refrigerator, earlier reported as faulty by staff.

The workman, one of the six bandits, walked through the main foyer of the club, passing several staff, before taking a lift to the second floor.

The man then walked through a lounge where about 45 members were eating and drinking, into the settling room and then opened a door that led to a stairwell and disused lift. 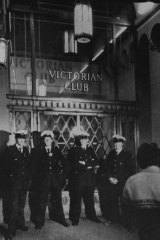 Police stand guard on the main entrance to the Victorian Club.

His five accomplices were waiting on the stairwell.

The six bandits, all aged in their 30s, wore balaclavas, dustcoats and overalls.

Two of them carried machine guns thought to be World War II Owen guns. The others were armed with hand guns and a shotgun.

Minutes before the raid, Mayne Nickless had delivered $1,250,000 in used hank notes and the Commercial Banking Company of Sydney a further $90,000 in new notes.

The money from Mayne Nickless was bookmakers’ takings from race meetings at Caulfield and Kyneton on Saturday, Caulfield and Geelong on Monday and Moonee Valley on Tuesday.

The bandits burst into the settling room and five of them disarmed two Mayne Nickless guards.

One of the disarmed guards tried to tackle a gunman. The bandit knocked the guard to the floor with a machine gun and then stuck the muzzle to the guard’s eye and said: “If you want to do something like that you’ll get your head blown off.”

The sixth bandit ran behind the bar of the crowded lounge. He held five staff including three women at machinegun point. He was then joined by another bandit.

Two accomplices then began shepherding about 25 bookmakers from the settling room. 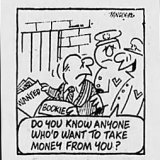 They were taken to the lounge and ordered to lie face down with the other 40 members.

The bandits told the staff, bookmakers and members: “If anyone tries to interfere the women will be the first to go. If you lift your heads we’ll blow them off.”

Two bandits then stood guard while another systematically ran through the lounge tearing out tele-phones. He smashed the locked glass door of a small barber’s shop to rip out one connection.

He then joined his three accomplices in the settling room.

One of the bandits ordered a security guard to open the doors of a black metal mesh clearing room containing the money. The doors had not been locked.

The guards and bank officials were then herded into the lounge and also ordered to the floor.

Inside the room sleet eight green metal boxes, about two feet long and eight inches wide, and a smaller brown wooden box. All were padlocked.

As each box was opened it was emptied into black calico bags.

This took about 10 minutes.

The gunmen then left quietly through the door they came through, ran down two flights of stairs and escaped in a vehicle.

A few minutes passed before the bookmakers, members and staff realised the bandits had escaped.

The club secretary, Mr Frank Murray, 40, ran to the first floor to raise the alarm.

Senior police described the raid as “the best organised and executed in Australia’s history”.

They have not ruled out the possibility that one or more of the bandits may have been members of the club or at least have been frequent visitors.

They said the gang’s expertise and precision timing indicated a thorough knowledge of the building.

The chief of the Victorian Chief Superintendent Graham Davidson, said: “There’s no doubt about It. the place had been thoroughly cased.

“These men were pretty slick professionals, but given time we’ll crack it,” Chief Superintendent Davidson said.

A Mayne Nickless director, Mr Jack Ashby, said his company would be having a close look at the future security arrangements at the club.

“I could have walked into the club on any other settlement day and said the security was OK,” Mr Ashby said.