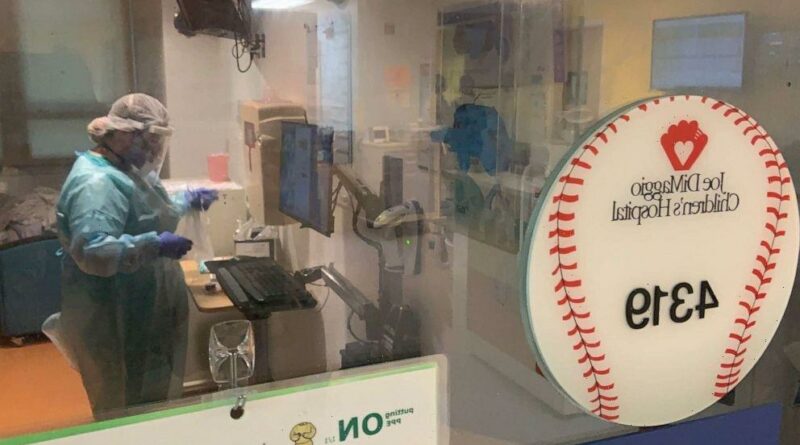 As COVID-19 infections surge again in the U.S., health officials are warning of a concerning uptick in pediatric cases and hospitalizations across the country, just as many children head back to the classroom.

With more than 48 million children under 12 still not eligible for vaccination, and less than a third of those ages 12 to 17 fully vaccinated, many youths remain at risk for infection.

Since the onset of the pandemic, nearly 4.3 million children have tested positive for COVID-19, according to the American Academy of Pediatrics and the Children’s Hospital Association, with infection rates growing exponentially in recent weeks.

In the last week, 94,000 new pediatric COVID-19 cases were reported, representing 15% of all reported new infections. Similarly, pediatric COVID-19-related hospital admissions are at their highest level since the onset of the pandemic.

“In the last several weeks, we have seen an enormous increase in the number of positive patients for COVID-19,” Dr. Ronald Ford, chief medical officer at Joe DiMaggio Children’s Hospital in Hollywood, Florida, told ABC News. “Most of these children are coming from the emergency department, and most of them are not sick enough to come into the hospital. However, those that are admitted are sicker than what we’ve seen before, and many of them are requiring care in our sensitive care units.”

In June, there were just over 20 positive pediatric patients who required care from the hospital’s emergency room team, Ford said.

In the month of July, that number increased to over 200 patients, and in recent weeks, the hospital has already cared for 160 patients, and are “well on our way to breaking July’s record.”

Although severe illness remains uncommon among children, according to experts, there are some children, many with underlying conditions, who are so sick that they require intensive care measures, including ventilation.

The rate of pediatric hospital admissions, in children between the ages of 0 and 17, per capita, is now more than four times higher than it was just a month ago.

The increase in pediatric patients, who are coming in much sicker than those hospitalized with COVID-19 last year, has been an alarming development, said Anthony Sanders, nurse manager in Joe DiMaggio Children’s Hospital’s Pediatric Emergency Room. It’s “just a lot scarier this time,” he said.

The country’s largest states — California, Texas and Florida — are each dealing with 100 to 200 pediatric COVID-19 patients, according to federal data.

Sanders said that he is often struck by the fact that it is not only the child who tests positive, but also the entire family.

“I think for us the most striking thing is how the increase in the families that are coming in that are positive, not just the one patient but the parents are positive, all the siblings are positive, that’s been the biggest thing for me that’s super concerning because kids are going back to school,” Sanders said.

At Children’s Hospital New Orleans, a federal team has been called in to assist medical staff who are confronted with a significant surge in pediatric patients.

Dr. Nihal Godiwala, a pediatric intensivist at Children’s Hospital New Orleans, told ABC News that he and his team are exhausted.

“This is a surge of COVID happening, and it’s totally preventable, and that’s why it’s been so frustrating for everyone here,” Godiwala told ABC News. “It’s really taking a toll on everybody at this point.”

However, even for those who may not become severely ill from COVID-19, experts say there is an urgent need to collect more data on long-term impacts of the pandemic on children, including the long-term physical impacts of the virus.

Thus, many of these front-line workers are urging that proper precautions be taken, beginning with wearing masks, particularly in large settings, such as schools.

For children still ineligible for the vaccine, masking will be critical in the months to come, Ford said.

“The best thing you can do to protect your child is to keep them away from the virus,” Ford added. “Masking has been shown to reduce the incidence of transmission and reduce the chances of your children getting COVID-19. So, first and foremost masking is really going to be one of the best defenses we have.”

“The majority of the patients who have been admitted, are between 10 and 13 years of age, which puts them right at or just below the age of vaccination,” said Hysmith. “This is why it is critically important for adults and children to get vaccinated as soon as possible.”

For those who are still hesitant about getting the vaccine, Godiwala pleaded for them “to stop thinking about yourself and think about others,” such as medically fragile children, the immunocompromised and the population under 12 not yet eligible for a vaccine.

“The vaccine is a lifeline to getting out of COVID and out of this mess,” said Godiwala.