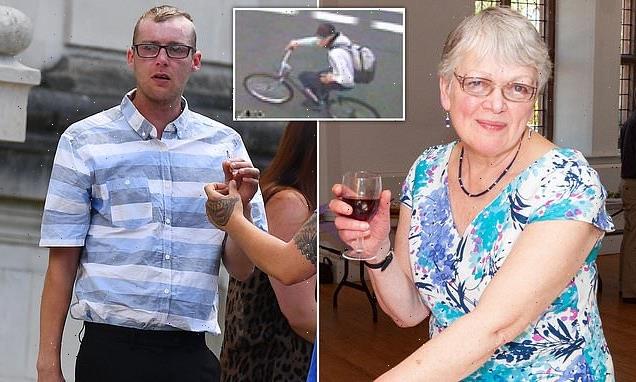 Father-of-one cyclist, 29, who mowed down and killed an elderly church minister, 79, in a hit-and-run as he ‘furiously’ rode his bike at speed along a pavement is jailed for 12 months

A cyclist was today jailed for mowing down an elderly church minister while ‘furiously’ riding his bike riding on a pavement – and leaving her to die.

Retired teacher Jane Stone, 79, died from serious head injuries after being struck in the high speed bicycle hit-and-run while on an evening walk.

Reckless Stewart McGinn, 29, smashed into Mrs Stone head-on as he careered round a corner while cutting onto a pavement. 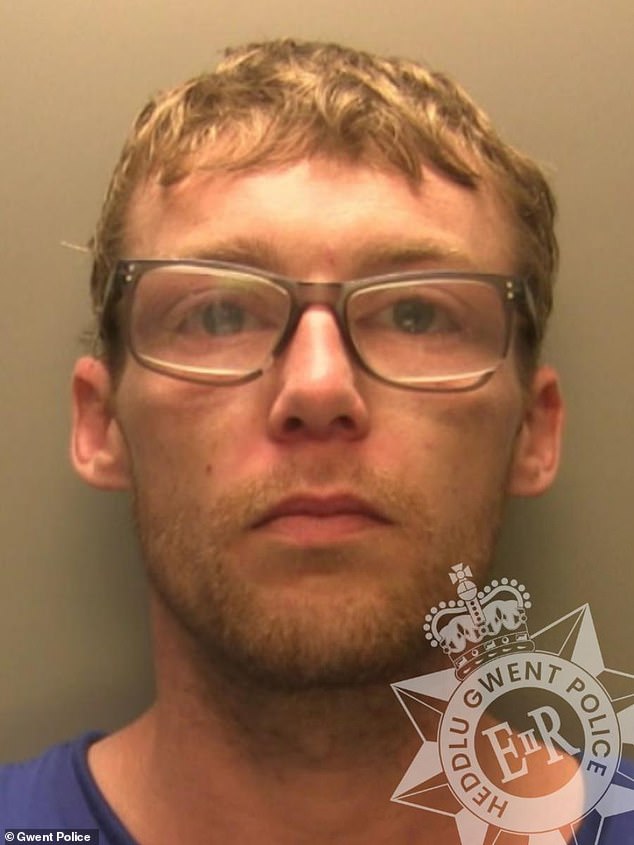 Stewart McGinn, pictured, was today jailed for a year and banned from driving for two years 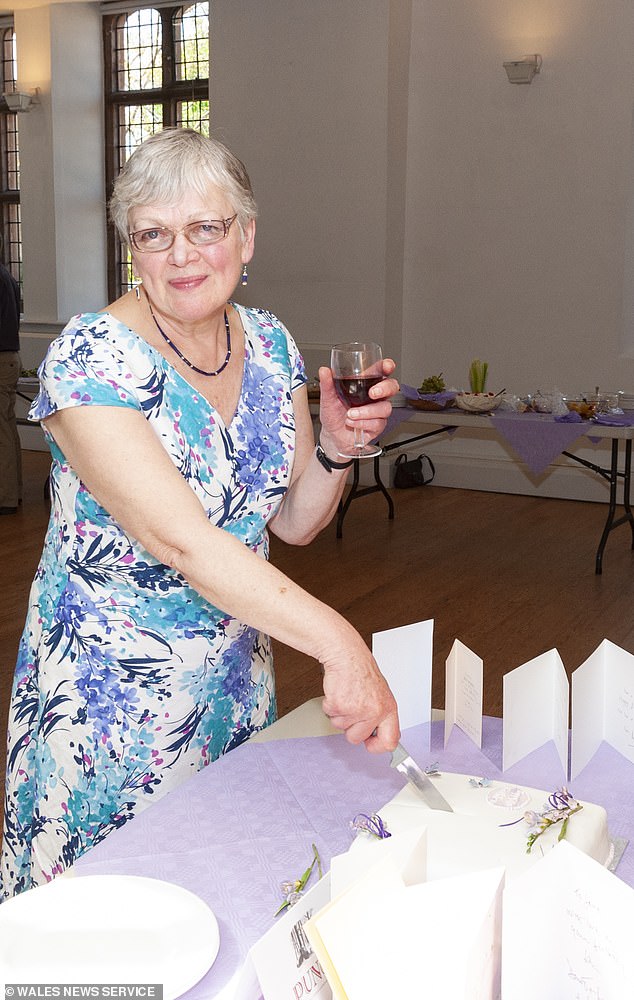 Ms Stone, pictured, was walking home from the cinema when she encountered Stewart McGinn who was riding quickly along the pavement 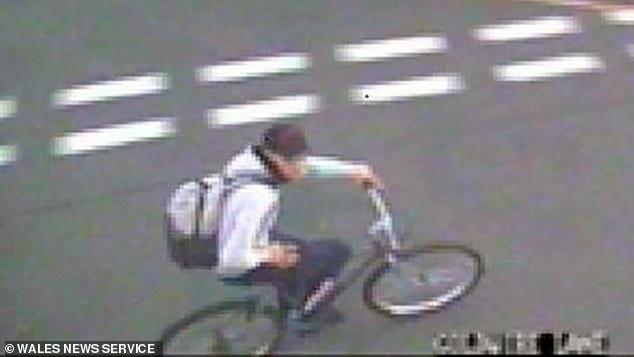 McGinn, pictured on his bicycle before crashing into Ms Stone and riding off without stopping 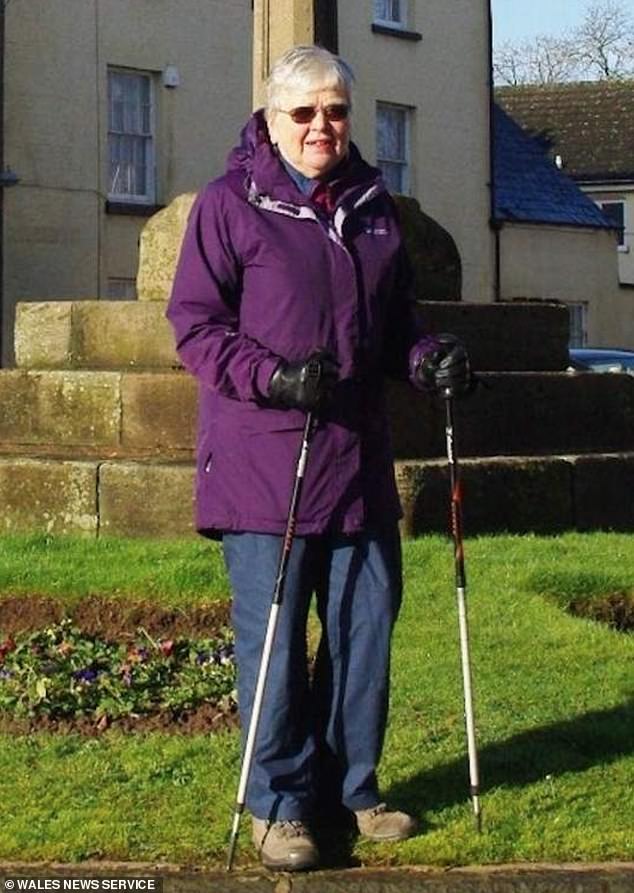 Mrs Stone had no way of avoiding the crash and died in hospital four days after being injured after walking home from the cinema on a warm summer’s evening.

Prosecutor James Wilson said McGinn – who only had one working brake on his bike – came round the corner ‘at speed’ and collided with her.

He said: ‘She fell to the ground landing on her head and suffered a severe fractured skull.

‘The defendant did not stop or offer any assistance but cycled away.’

Mrs Stone’s friend Janet Bromley said Jane was ‘poleaxed’ to the ground by the force of the blow and was left ‘her eyes rolling and mouth frothing’.

‘It knocked her hands raised past her body which was pushed back violently. 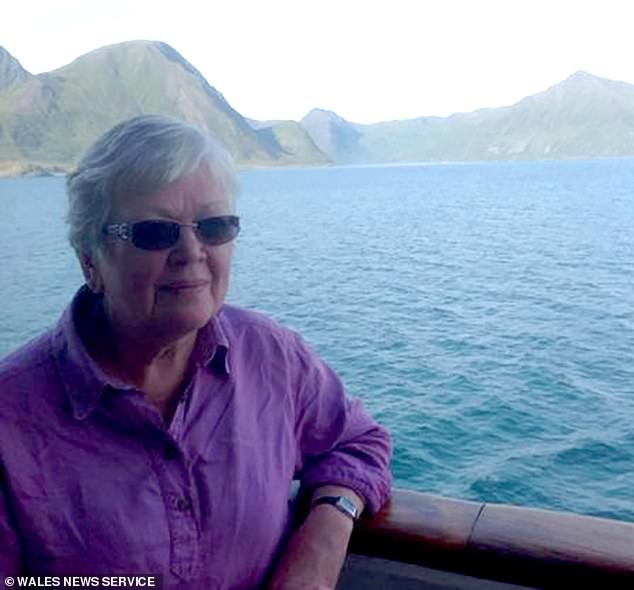 ‘Her feet were lifted off the ground it caused her head to poleaxe to the ground and I heard an almighty crack as her head struck the pavement.’

Mr Wilson told Cardiff Crown Court that after the collision last June father-of-one McGinn stayed on the mountain bike and rode off to his mother-in-law’s house.

He said: ‘Mrs Bromley shouted to him I’m on my own, please help me but he ignored her and continued to ride away.’

McGinn only handed himself into police 10 days after the crash in Monmouth, South Wales, and falsely told officers he stopped to help Mrs Stone to her feet and check she was ok.

He later admitted causing bodily harm to Jane Stone by ‘wanton or furious driving while being in charge of a bicycle’ under the 1861 offences against a person act. 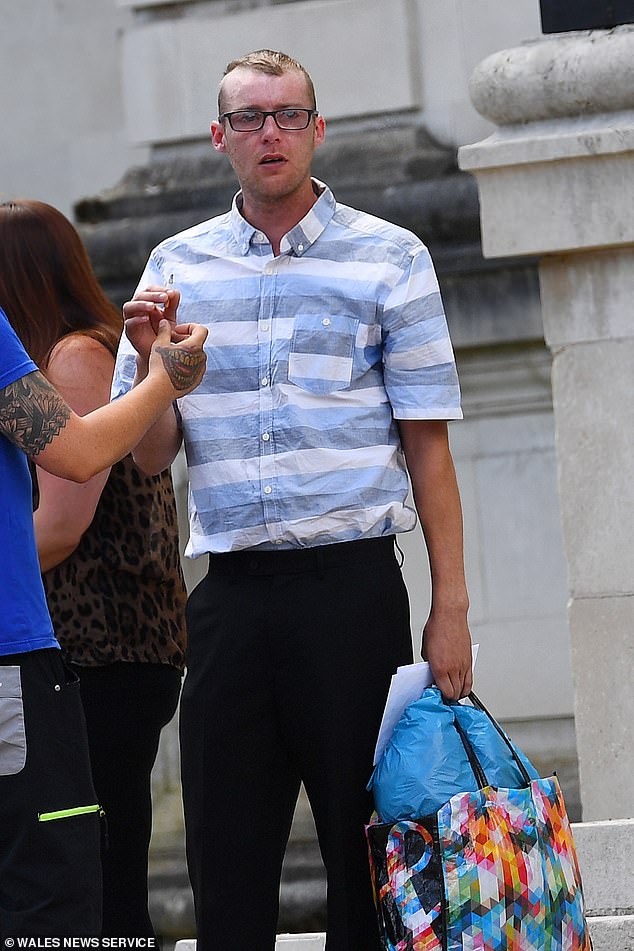 Judge Tracey Lloyd-Clarke told McGinn, pictured,  he showed ‘flagrant disregard for the safety of others’

A victim impact statement from Mrs Stone’s brother David Bruton said his sister was not ‘a frail old lady’ and was ‘healthy and active’ who would go on long distance walks and took part in swimming and yoga.

Ben Waters, defending, said: ‘He will have to live with the consequences of his actions and causing the death of another person.’

Judge Tracey Lloyd-Clarke told McGinn he showed ‘flagrant disregard for the safety of others.’

She jailed McGinn for one year – saying the maximum sentence was two years – and banned him from driving for two years and six months.

She told him: ‘You were on the pavement riding far too fast and collided with Jane Stone with considerable force.

‘You gave no warning as to your approach and they saw no lights on your bicycle.

‘You rode on the pavement and rode very fast around the corner when you knew you could not see if anyone was there – they stood no chance of avoiding you.’

She said ‘this was not a momentary inattention’ and McGinn made ‘a deliberate decision to ignore or disregard the rules of the road which apply just as well to cyclists as other road users.’

McGinn, of Monmouth, was charged under the 1861 Offences Against the Person Act.

Judge Lloyd-Clarke said no sentence she could pass would ease the pain felt by Mrs Stone’s family.

She said: ‘She gave her time to help others and her loss will be felt by many people for a very long time.’

Speaking after the sentence, Ryan Randall of the CPS said: ‘The way in which McGinn rode his bike around the corner was completely irresponsible. 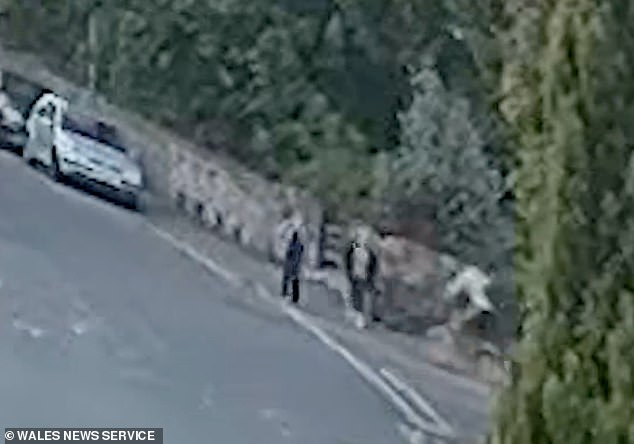 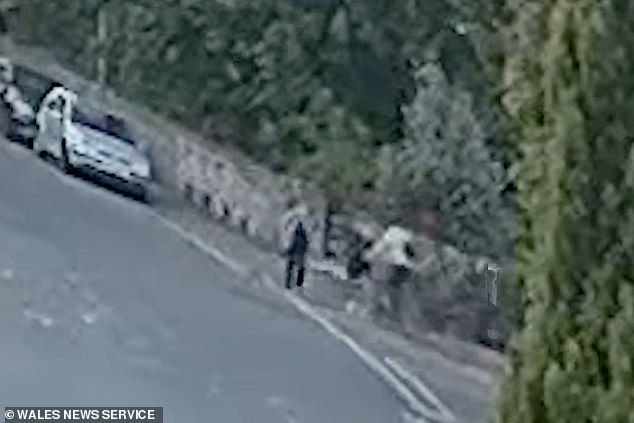 When he pops around the corner, there is nowhere for Ms Stone to go as she is unable to get out of McGinn’s way 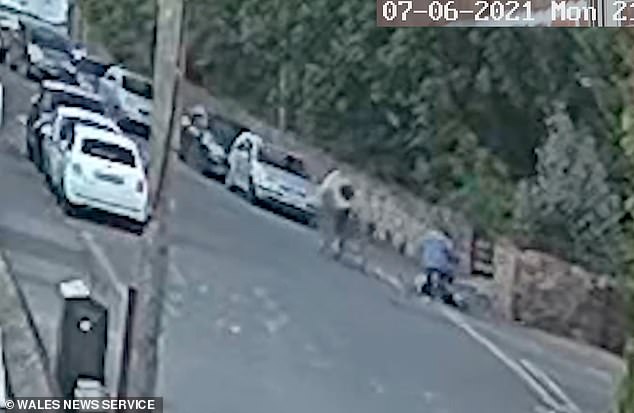 Instead of stopping and providing assistance to his victim, McGinn pedaled off at speed on the wrong side of the road

‘His disregard for the safety of others using the pavement proved to be disastrous and is a stark reminder that pedal cycles can be dangerous to other road users when ridden so recklessly.

‘Our thoughts are with those who have suffered the tragic loss of Mrs Stone.’

Mrs Stone’s family paid tribute to her following the tragedy in her hometown of Monmouth, South Wales, and described her as ‘very caring and active.’

A statement said: ‘She was healthy and physically active, only a few years ago abseiling down the church tower to raise funds.

‘Having been born and brought up in Monmouth she trained in London as a teacher, in which profession she was well respected and appreciated.

‘In retirement and being a widow, she returned to her roots, involving herself with great enthusiasm in many aspects of Monmouth life.

‘She was a past Churchwarden of St. Thomas’s Church, was a Lay Eucharistic Minister, Sacristan and heavily involved in all church activities, helping and supporting members of the community as needed.

‘She enjoyed long distance walking, setting herself the challenge of completing 1,000 miles per year and was currently tackling, with her walking friend, Offa’s Dyke from South to North Wales.

‘Jane was a well-loved member of the family and closely followed the lives of her great nieces and nephews.’

Her church paid tribute to ‘full of life’ Jane who they described as a ‘supportive and tireless’ churchwarden.

A spokesman for Monmouth Parishes said: ‘Jane was always so full of life and willing to share not only her time but also her faith in her care for others.

‘She was a supportive and tireless churchwarden for many years and a hardworking sacristan who gave her considerable talents in ensuring that the highest standards were maintained behind the scenes of worship.

‘She was a lively contributor to house groups and study groups, a welcoming hostess and she also made a significant contribution to St Thomas PCC.

‘A fearless and loyal friend for all those who knew her well.’