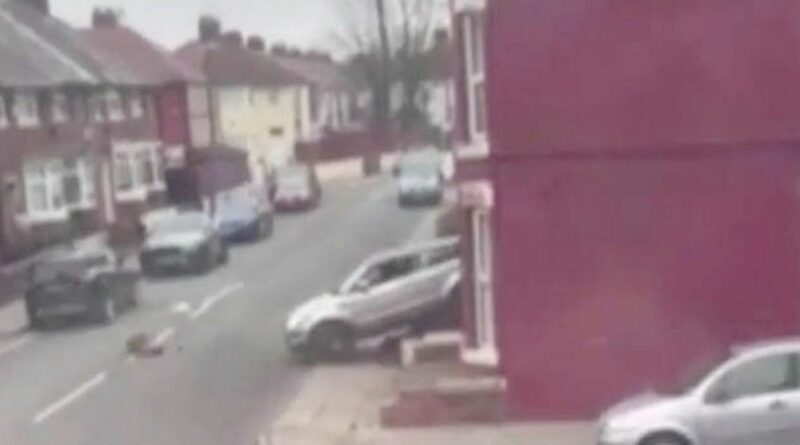 This is the shocking moment a driver rams his Range Rover into a house after being attacked by two men throwing bricks at his car.

Dramatic CCTV video shows the SUV reverse towards the terraced home before the driver accelerates backwards into the front door and bay window..

Bricks and rubble then rain down on the Rang Rover Evoque before the car speeds away along the residential street in Liverpool.

The surveillance video begins showing a person clad in black clinging onto the bonnet of a silver-coloured Range Rover as the driver reverses into a street.

Two other men are seen running towards the car as the man on the bonnet jumps off. The two men then pick up what appear to be bricks and rocks before throwing the missiles at the car.

The driver then hurtles towards them, hits the kerb and rams onto the pavement where the lads dodge inside a flat.

The Range Rover makes a turn and swerves close to the residential block before being pelted with bricks again.

At this point the driver reverses his car towards the house, pauses, then rams into the ground floor flat. He then speeds off with a pile of bricks and rubble falling over his car and in the road.

A neighbour living on Glamis Road told Liverpool Echo: "I heard shouting and knew my wife was coming home soon so I looked out of the window.

"We always have trouble on this street and I wanted to make sure it was safe.

"We see men fighting in the road on the corner quite a lot but we have never had anything this bad.

"I couldn't believe what I was seeing tonight. I have a wife and kids, its very scary."

Merseyside Police confirmed nobody was injured during the incident on Wednesday (March 9) and no arrests were made, the site reported.

Officers arrived at the scene shortly after the incident and sealed off a section of Glamis Road from its junction with Marlborough Road to Witton Road.