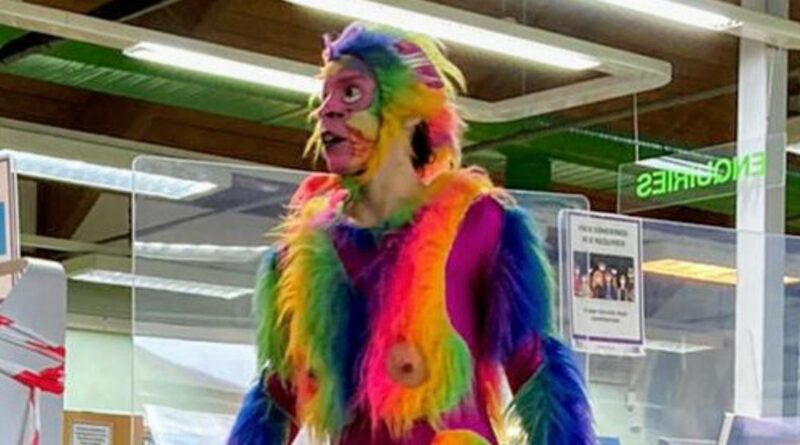 The unnamed actor, who wore the rainbow-coloured monkey costume with exposed buttocks, took part in the Redbridge Libraries Summer Reading Challenge in east London on Saturday.

The library claimed the event was to "promote reading among kids" aged between four and 11.

Disgusted parents complained to the Redbridge Council after images of the shocking costume appeared online.

"Someone needs to lost their job over this," one disgruntled parent said.

A second wrote: "This is unbelievable. Have we completely lost our moral compass as a society?"

Redbridge Libraries said it was sorry for the "inappropriate” costume, while confirming the bizarre performance was stopped early.

“This will never happen again," it added.

In a video, the 'monkey' runs out from the library on the street with two other performers holding a placard.

Redbridge Libraries also tweeted: “During an event put on at the library today there was a performance by a Carnival Arts Company.

“Unfortunately one of the animal costumes was inappropriate which we were not aware of at the time of booking.

“We deeply apologise for the offence caused. This is being looked into.

"This event was arranged by Vision and not Redbridge Council. Upon receiving complaints passed on by the Leader and Deputy Leader, we ceased the performance and are truly apologetic for the distress caused to residents. This will never happen again."

Council leader Jas Athwal said all future performances, which had been organised by a partner charity, had been cancelled.

The actor belonged to a troupe of street performers from Mandinga Arts in Clapham South, London.