AN INFLUENCER has sparked fury after she draped herself over the Holocaust Memorial in a crop top for a photoshoot.

A viral TikTok video shows the blonde woman distastefully posing at the monument in Berlin while a woman is heard saying “I’m horrified beyond words.” 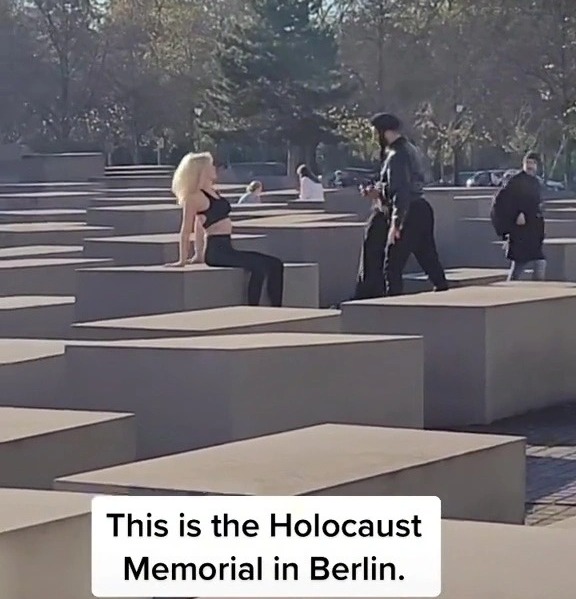 The memorial, which was erected in Berlin to commemorate the millions of murdered Jewish people, is formed of 2,711 concrete slabs arranged in a grid pattern on a sloping field.

The clip, posted by a page called Influencers in the Wild with the caption “don’t do this ever” has now been viewed over 10 million times.

Social media users were shocked at the alleged German woman’s attitude while visiting the Memorial to the Murdered Jews of Europe.

One wrote: “This place has probably the most eerie, loudest silence I’ve ever experienced. I couldn’t imagine thinking this was somewhere for that.”

Another said: For everyone saying ‘She probably didn’t know’, how oblivious do you have to be to not know that?

“Berlin is basically one big memorial, ain’t no way.”

A third added: “The people saying, ‘the artist said it’s ok to take photos,’ are completely missing the point of why this is disrespectful.”

In 2017 a Berlin-based Israeli writer launched an art project satirising the disrespectful behaviour of selfie-loving tourists climbing the a Holocaust memorial.

Shahak Shapira, 28, created a website called 'Yolocaust' where he contrasts photographs of people smiling, juggling and doing yoga with the horrors of the concentration camps.

The thoughtless selfies are juxtaposed next to startling archive wartime images to show just how absurd the actions of the social-media obsessed youngsters are.

Many of the pictures, which have been shared on Facebook, Instagram and Twitter, are captioned "jumping on dead jews" or with the hashtag "yolocaust" – a portmanteau of "yolo" (You Only Live Once) and the Holocaust.

It comes as British tourists have been accused of disrespecting the families of Holocaust victims by posing for inappropriate selfies at Auschwitz.

They are sharing images of themselves smiling and goofing around at the Auschwitz-Birkenau Memorial and Museum, built to remember more than one million who died there during the Second World War. 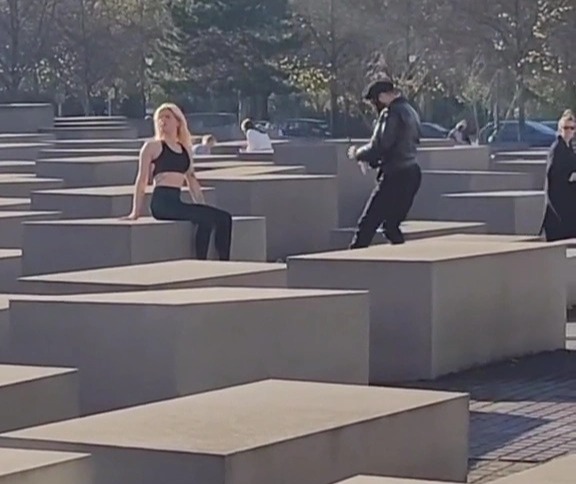