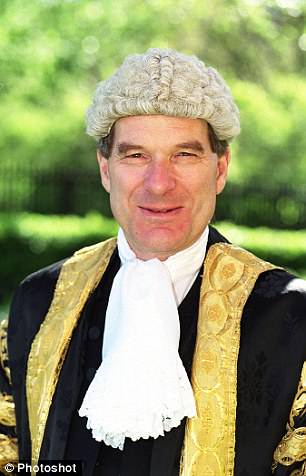 Celebrities who seek anonymity when involved in embarrassing court cases are wasting their time if already named on the internet, a senior judge has said.

The rich and famous have increasingly used privacy laws to prevent the public discovering that they are involved in controversial activities.

But Lord Jonathan Mance, speaking as he reached 75 and stepped down from the deputy presidency of the Supreme Court, said at the weekend that social networks such as Twitter and Facebook, where salacious news can be transmitted fast in defiance or ignorance of court orders, were causing problems for judges.

He added: ‘Obviously if everybody knows the name then there is no point in the law trying to shut the door after the horse has bolted.’

They did so in spite of the fact that the star had already been named on the internet.

The judges accepted the argument that the identity of the celebrity involved had not become widely known in England.

The Supreme Court said there remained a ‘qualitative difference’ between reports in established English newspapers and tittle-tattle online. Campaigners fear there has been a decline in press freedom because of the adoption of privacy laws introduced by the European Convention on Human Rights, and developed by lawyers hired by politicians and celebrities keen to hide their antics from the public.

The celebrity in the threesomes and olive oil bathing parties case – who could be known only as PJS – had hired lawyers charging £600 an hour to fight his corner.

A High Court judge initially rejected the star’s demand for a gagging order, but the Appeal Court and the Supreme Court overturned the decision, ensuring his name was kept from those unwilling to scour the internet.

They ruled the celebrity’s right to privacy outweighed the public interest. The fact that children were involved was also a factor.

Lord Mance also told The Sunday Telegraph judges are immune from attempts to influence them over the internet, adding: ‘We are trained not to be influenced.

‘If people started to believe as a result of trolling or media that judges were doing just what they liked and giving effect to their personal preferences rather than applying the hallowed system of common law and statute law honestly and diligently… they would be very mistaken.’