Gavin Wiliamson denied pupils face chaos over mask and testing rules tomorrow as they finally get back to classrooms.

The Education Secretary insisted schools have been given clear guidance with the first phase of lockdown easing set to happen.

In interviews this morning, Mr Williamson said parents and children are ‘excited’ about getting back to face-to-face lessons.

He defended the rules around wearing masks insisting that in secondaries students ‘recognise the importance of doing whatever they can do’.

Challenged that teachers in primaries have merely been told to wear masks ‘where possible’, he told Sky News: ‘We set out very clear guiadance about how teachers will be best able to approach this. Wearing a face mask is just one small element.’

Mr Williamson also insisted testing would play a key role – despite concerns about the logistics involved and the number of families that will be ordered to isolate due to ‘false positives’.

Meanwhile, the Cabinet minister confirmed that the government is looking at shortening summer holidays and extending the school day as part of a wider overhaul.

He said the shake-up could be the most significant since the end of the Second World War. 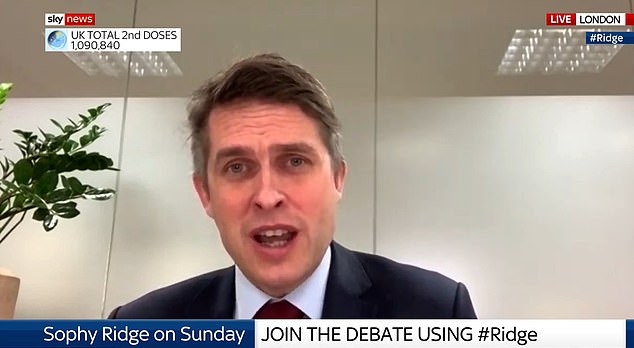 In interviews this morning, Mr Williamson said parents and children are ‘excited’ about getting back to face-to-face lessons

The comments came as Boris Johnson vowed to be ‘cautious’ in loosening coronavirus restrictions ahead of the return to classroom after two months of home schooling for most children.

The PM hailed the ‘truly national effort’ to reduce coronavirus levels with the country on the cusp of marking the first phase of lockdown easing as classrooms reopen this week.

But, despite an improving picture in terms of declining Covid cases in England, he said he wanted to be careful not to ‘undo the progress we have made’.

It comes as the vaccine programme continues to accelerate, with people aged between 56 and 59 being invited to book Covid-19 jabs this week.

Hundreds of thousands of letters for the age group began landing on doorsteps on Saturday, and the latest round of invites comes after eight in 10 people aged 65-69 took up the offer of a jab, NHS England said.

Business Secretary Kwasi Kwarteng provided further optimism when he told The Times it was ‘possible’ the Government will have offered a first dose to all adults by June – a month ahead of the current end of July target.

Heralding the return of schools, the Prime Minister – who is due to visit a vaccination centre on Sunday – said: ‘The reopening of schools marks a truly national effort to beat this virus.

‘It is because of the determination of every person in this country that we can start moving closer to a sense of normality – and it is right that getting our young people back into the classroom is the first step.’

Mr Johnson urged the public to stick to the rules as the Government contemplates keeping to its plan for removing measures.

According to the Prime Minister’s road map, the second part of stage one, which will allow outdoor gatherings of either six people or two households, is due on March 29.

Shops could open by April 12 and all restrictions could possibly be lifted by June 21.

‘We are being cautious in our approach so that we do not undo the progress we have made so far and I urge you all not to give up on your efforts to keep your families and others safe,’ Mr Johnson added.

‘Get the vaccine, get tested, and remember that we are all in this together.’ 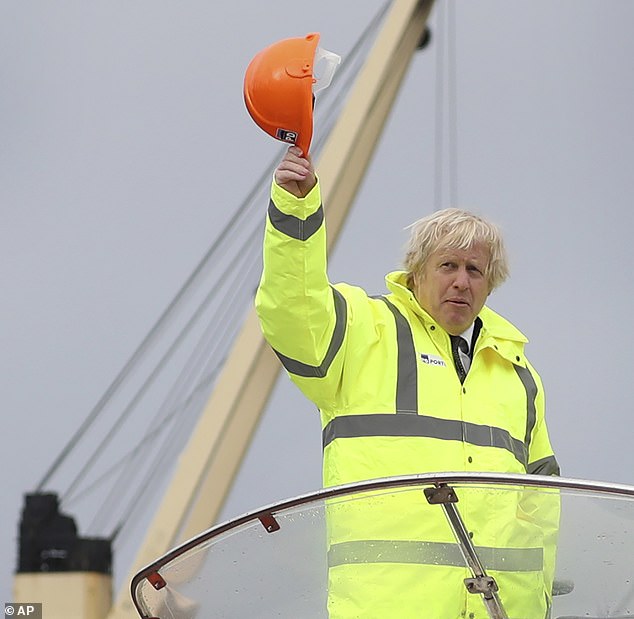 The renewed push for people to continue to obey the rules comes after Health Secretary Matt Hancock shared data on Friday showing the average daily number of Covid cases, hospital admissions and deaths are the lowest they have been since autumn.

Yesterday the Government confirmed a further 158 people had died within 28 days of testing positive for Covid-19 and that, as of 9am, there had been a further 6,040 lab-confirmed cases in the UK.

Mr Hancock said the falling cases meant the Government could continue with its plan of replacing the lockdown with the ‘protection that comes from vaccines and regular testing’.

As part of reopening schools, ministers are asking pupils to take two quick-result tests per week in order to weed out asymptomatic carriers of Covid-19.

Downing Street said nearly 57 million lateral flow test kits, which can produce results in less than 30 minutes, have already been delivered to schools and colleges as part of the rollout.

After three initial tests on site, students will be provided with two rapid tests to use each week at home.

Professor Sheila Bird, a member of the Royal Statistical Society, has warned it will be ‘very likely’ that the lateral flow tests will produce false positives and that all positive results should be double-checked with a more accurate PRC test.

Secondary school and college students are also being asked to wear face coverings in classrooms where social distancing cannot be maintained, with the advice set to be reviewed after Easter.

Education Secretary Gavin Williamson said: ‘Tomorrow will mark a moment of joy for millions of people across the country.

‘I do not underestimate how challenging the last few months have been with some children in class and most at home, but I do know how important it is for all children to be back in school, not only for their education but for their mental health and wellbeing.’

Mary Bousted, joint general secretary of the National Education Union, said children would be returning to in-person lessons in ‘very different frames of mind’, with some anxious and nervous to go back.

‘Education recovery plans must address these differences and be understood to be a long-term response to the pandemic,’ she said.

‘Education recovery funding will be needed for years to come.’