Germany and Sweden are being added to the Government’s travel quarantine ‘red list’ as ministers insisted it is ‘critical’ they stop coronavirus cases from being imported into the country during the national lockdown.

International travel is restricted during the England-wide four-week shutdown as the the Government urges the nation to stay at home as much as possible.

But Transport Secretary Grant Shapps is sticking with the so-called ‘travel corridors’ policy as he announced people returning from Germany and Sweden will have to self-isolate for 14 days after 4am on Saturday. 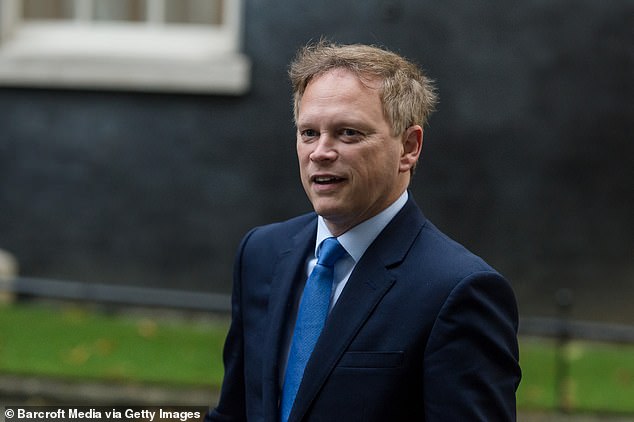 Mr Shapps reminded people that travel outside the home is ‘not permitted’ during lockdown except for ‘a limited number of reasons including work or education’.

He tweeted: ‘In line with the new COVID-19 guidance, travel outside of home, with the exception of a limited number of reasons including work or education, is not permitted during lockdown.

‘#TRAVELCORRIDORS do remain critical to the Government’s COVID-19 response, keeping imported cases DOWN.

‘We are removing SWEDEN and GERMANY from the Travel Corridor list.

‘From 4am Saturday 7th November, if you arrive into the UK from these destinations you will need to self-isolate.

‘All arriving passengers should complete a passenger locator form on arrival.’

Germany’s seven-day rate of coronavirus cases per 100,000 people reached 140 after nearly 20,000 cases were reported on Wednesday.

The rate for Sweden is 190 per 100,000, according to analysis of data collected by the European Centre for Disease Prevention and Control.

The Government had originally been using a threshold of 20 cases per 100,000 to trigger a review of whether a country should be added to the ‘red list’. 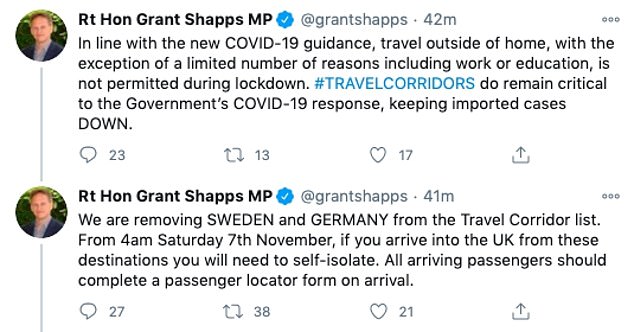 It is though that ministers are now using a rate of 100 cases per 100,000 to guide decision-making as Europe experiences a surge in infection.

The UK currently has a coronavirus infection rate of approximately 235 cases per 100,000 people.

The Government remains under intense pressure to reduce the 14-day self-isolation period.

Mr Shapps has launched a task force to develop methods of reducing quarantine for people arriving from non-exempt locations.

He said the Government was considering a ‘test and release regime’ which would still involve a quarantine period of at least a week.