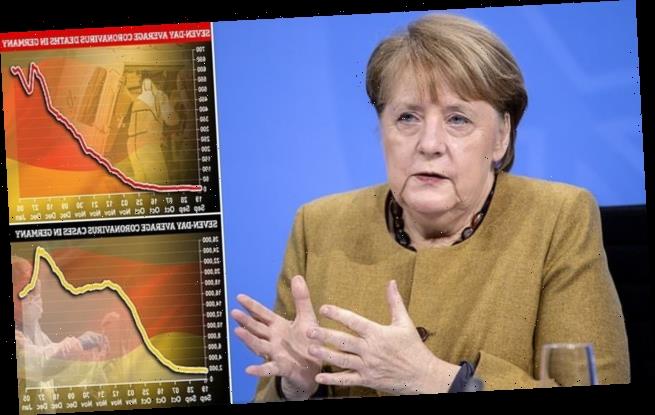 Germany is extending its nationwide lockdown until the end of the month and introducing tougher restrictions in an effort to curb a surge in coronavirus infections, Chancellor Angela Merkel said on Tuesday.

‘We need to reduce contacts further because we have seen that we have not been able to lower the incidence [of coronavirus] in the last [few] weeks as far as we would have wished for,’ Merkel told journalists after a meeting with the leaders of Germany’s 16 federal states.

The new rules will restrict for the first time non-essential travel for residents of hard-hit areas all over Germany.

They limit movement to a 15-kilometre (nine-mile) radius in towns and districts where the number of new coronavirus cases is above 200 per 100,000 residents over a seven-day period.

The rules also include the strictest limit on gatherings since the first lockdown in the spring, with members of any one household being allowed to meet only one other person. 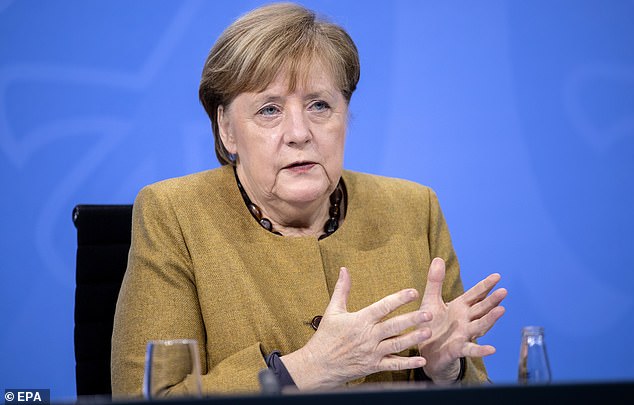 Germany is extending its nationwide lockdown until the end of the month and introducing tougher restrictions in an effort to curb a surge in coronavirus infections, Chancellor Angela Merkel said on Tuesday 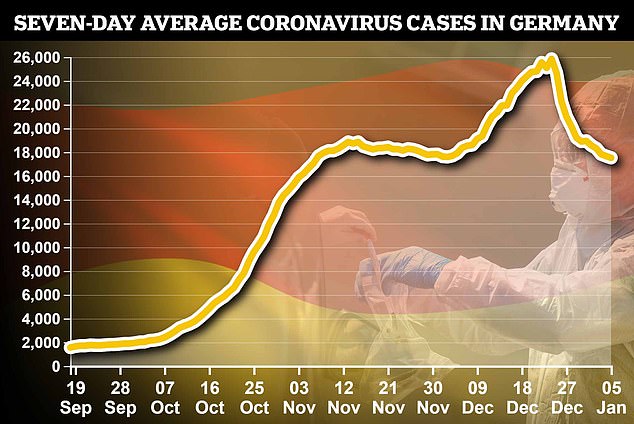 The number of confirmed coronavirus cases in Germany rose by 11,897 to 1.787 million over the past 24 hours, the Robert Koch Institute for infectious diseases said on Tuesday 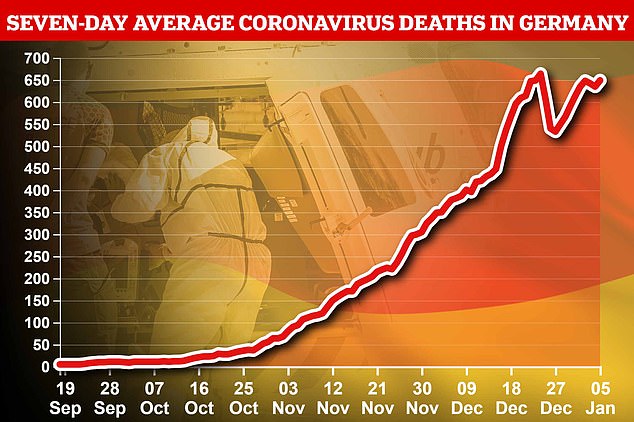 Germany’s overall death toll rose by 944 to 35,518 on Tuesday after a drop in deaths in late December

Shops and restaurants will remain shut until the end of January. Schools are also to remain closed, with classes to be held online, until at least the end of the month.

‘We believe these measures are justified, even if they are hard,’ Merkel said, adding that she and the state leaders would review the new measures on January 25.

Like many other European countries, Germany is struggling to contain a second wave of the virus. Britain began its third COVID-19 lockdown on Tuesday with citizens under orders to stay at home.

The number of confirmed coronavirus cases in Germany rose by 11,897 to 1.787 million over the past 24 hours, the Robert Koch Institute for infectious diseases said on Tuesday. The overall death toll rose by 944 to 35,518.

Germany, Europe’s largest economy and most populous country, had imposed a partial lockdown in November but was forced to close schools, shops and restaurants in mid-December after the initial steps failed to have the desired impact.

Concern is growing that hospitals in the country will struggle to cope, and Merkel said a new variant of the coronavirus first detected in Britain increased the need to be more cautious.

‘At the moment, we have reached a situation at some hospitals that is very, very much borderline. This, too, caused us to take far-reaching decisions today,’ she said.

Germany hopes to be able to limit the spread of the virus until enough of its population has been vaccinated against COVID-19 to achieve herd immunity.

It started vaccinations on December 27, but media and some officials have criticised the government for a slow start and for ordering too few doses. By Tuesday, around 317,000 of Germany’s 83 million residents had received a shot.

‘Maybe the expectation was raised that there’s as much vaccine available as we need and we just need to give the shots. That will not be the case in the first quarter,’ Merkel said.