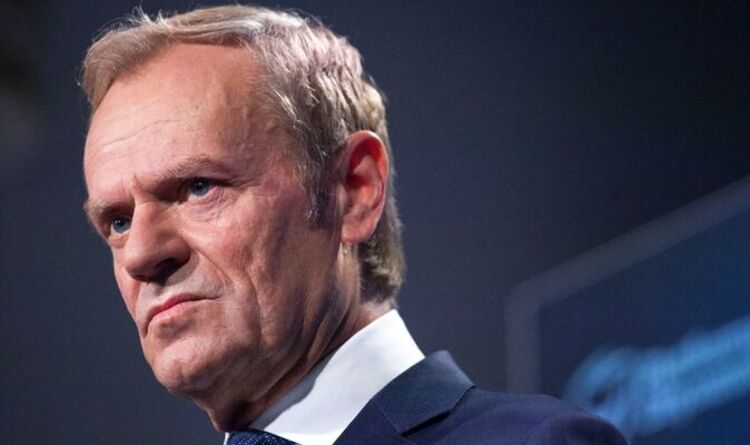 Russia has 'not taken any of its main objectives' says Wallace

The former European Council President hit out at a number of EU countries including Germany. Mr Tusk accused them of “disgracing themselves” in a row over sanctions against Moscow.

DONALD Tusk has lashed out at Germany over its response to Russia’s invasion of Ukraine.

The ex-EU chief tweeted: “In this war everything is real: Putin’s madness and cruelty, Ukrainian victims, bombs falling on Kyiv.

“Only your sanctions are pretended.

Mr Tusk’s tweet comes as there are divisions across member states over how far to go with sanctions.

Some EU nations that could face the harshest economic backlash themselves have been pressing to keep the most severe steps in reserve.

Germany is said to be among those that prefer a step-by-step approach, while Central European and Baltic states – those closest to Russia – want a harder stance.

Britain, the US and the EU have hit Moscow with a package of economic sanctions after Russia launched an invasion on Ukraine early on Thursday in the biggest attack on a European state since World War Two.

Boris Johnson is pushing for Russia to be cut out of the Swift system, a type of international bank sort code, but is facing resistance to the move from Europe.

In a White House briefing on Thursday, US President Joe Biden said the move was “always an option but right now that’s not the position that the rest of Europe wishes to take”.

German Chancellor Olaf Scholz was reported to have said that certain measures should be “for a situation where it is necessary to do other things as well” when asked about Swift.

But Ukraine’s foreign minister Dmytro Kuleba tweeted those who opposed Russia being blocked from the Swift payment system would have “the blood of innocent Ukrainian men, women and children… on their hands”.

DON’T MISS
In this time of crisis there should be no compromise – EXPRESS COMMENT [COMMENT]
Ukrainian student leaves GMB fans in tears as she has no plans to run [VIDEO]
Putin takes on Britain! Russia BANS all flights in direct attack on UK [INSIGHT]

Nato allies are set to meet later as they come under pressure to go even further than sanctions already announced to hit the Kremlin.

Mr Johnson told his Cabinet on Thursday night that the UK could be proud of its role in supporting Ukraine, after the Prime Minister announced the “largest and most severe” package of sanctions Russia has ever faced to punish “blood-stained aggressor” Vladimir Putin.

A No 10 spokesperson said: “He said the UK could be proud of the actions it has taken so far, playing a leading role in Nato, developing a tough economic sanctions package together with our allies, and providing lethal defensive weaponry to the Ukrainian government.

“He told Cabinet that the Ukrainian military was fighting back in defiance of Putin’s attempts to subjugate Ukraine. And he pointed to protests within Russia which demonstrated that Putin’s actions would also face resistance from within his own country.”

She wrote on Twitter: “First, this package includes financial sanctions, targeting 70% of the Russian banking market and key state owned companies, including in defence.

“Second, we target the energy sector, a key economic area which especially benefits the Russian state. Our export ban will hit the oil sector by making it impossible for Russia to upgrade its refineries.

“Third: we ban the sale of aircrafts and equipment to Russian airlines.

“Fourth, we are limiting Russia’s access to crucial technology, such as semiconductors or cutting-edge software.

“Finally: visas. Diplomats and related groups and business people will no longer have privileged access to the European Union.”