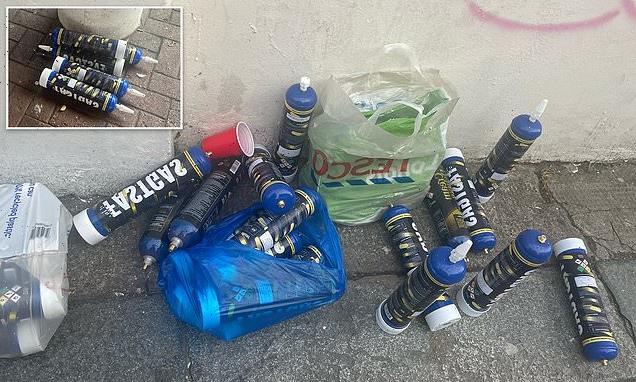 Fears over rise of supersize ‘hippy crack’: Empty industrial grade cylinders that are 80 TIMES the size of normal canisters litter the streets of Notting Hill after carnival amid warnings over dangerous trend

Giant laughing gas containers have been seen littering the streets of Notting Hill this morning, reflecting a new summer trend that is worrying drug experts.

Nitrous oxide is regularly taken by young people at parties and festivals, and the small silver canisters it is usually sold in have become a familiar sight in town centres and parks.

But revellers are increasingly using large containers instead, with industrial sized tubes of ‘noss’ appearing at the Notting Hill Carnival in recent days and at another festival in London last weekend.

Experts say some of the containers can deliver 80 times the usual amount of gas, raising the risk of people using too much. 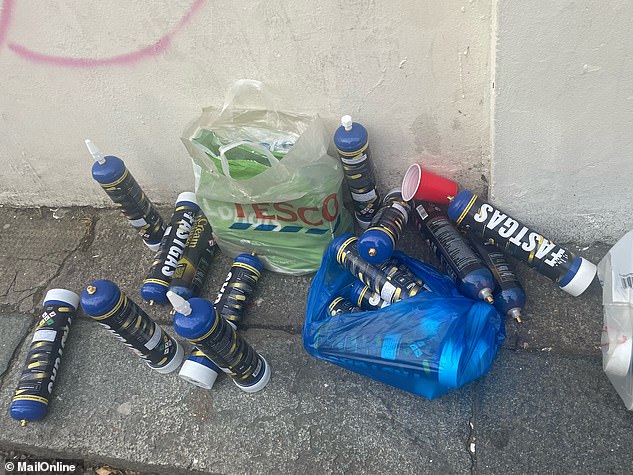 The large canisters are used in the catering industry and being in possession of one is not a criminal offence, but selling the drug for recreational use is.

The containers are readily available online and on social media, while last weekend dealers were seen going around the Electric City festival in Gunnersbury Park, West London, offering inflated balloons for £10.

In Southgate, north London, local officers have repeatedly come across large piles of the supersized canisters in public spaces.

Fast Gas, the Amsterdam-based company who made the cylinders seen at Notting Hill, say their products are used to produce whipped cream in restaurant environments.

However, their website strongly suggests they are also intended for recreational purposes, with a section reading: ‘We find your privacy very important, for this reason we do not use logos on the box.

‘So nobody can see where the order is placed. It arrives anonymous at your doorstep, or if you order for a friend at his of course. #just asking for a friend!’ 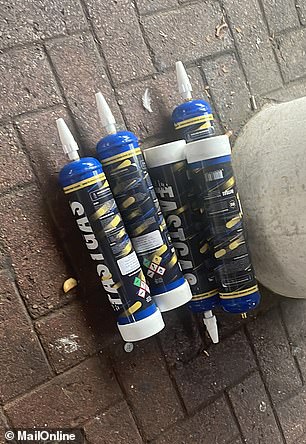 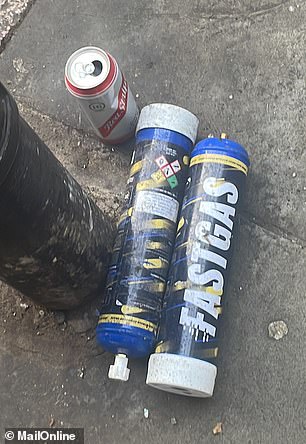 Fast Gas, the company who made the cylinders seen at Notting Hill, say their products are used to produce whipped cream in restaurant environments

The firm’s website strongly suggests they are also intended for recreational purposes, with a section reading: ‘We find your privacy very important, for this reason we do not use logos on the box’

What is Nitrous Oxide and is it illegal?

Nitrous Oxide, has been nicknamed ‘laughing gas’ due to the euphoric and relaxed feeling people who inhale it can sometimes feel.

The substance – also known as ‘hippy crack’ – is normally bought in pressured canisters, commonly transferred to a container, e.g. a balloon, from which the gas is inhaled.

Although possession of laughing gas is not illegal, English law prohibits its sale to under-18s if there is a chance they will inhale it. 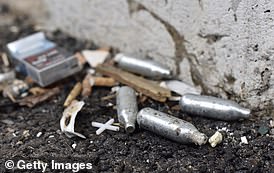 The effects of nitrous oxide vary depending on how much has been inhaled but they include:

• Feelings of euphoria, relaxation and calmness.

• Dizziness, difficulty in thinking straight and fits of giggles/laughter.

• Sound distortions or even hallucinations.

• In some people, a headache can be an unwanted immediate effect.

• Unconsciousness or death from lack of oxygen. This occurs when the available oxygen for breathing is effectively pushed out by the nitrous oxide.

A Government commissioned review is now looking at whether more needs to be down to curb the use of larger canisters.

Overuse can lead to suffocation and even death. While prolonged use can cause anaemia and vitamin B12 deficiency.

‘In a week, maybe I would do about 600 canisters,’ she told the BBC. ‘For the next week I wouldn’t be able to do anything, I would be sleeping 12 plus hours and I would be vomiting. I’d be having sweats, I couldn’t eat, I couldn’t drink water.

‘I couldn’t walk or use my hands.’

The frequent and heavy use of the drug left her with no sensation in her legs and in the constant care of her dad.

She added: ‘I can’t do anything for myself at the moment. It’s not like I can get up and walk out of my house, which is why I have my dad. I have to use a commode. He does literally everything for me.’

A dealer of the drug said it was ‘a walk in the park’ to find users on social media who wanted to buy the larger canisters.

‘It’s dangerous. I don’t think people should do it, but as long as they do I am going to sell it,’ the anonymous dealer said.

Harry Sumnall, a Professor in Substance Use at Liverpool John Moores University, said: ‘The concern is over the availability of much bigger canisters, potentially delivering 80 maybe even 90 times the amount of nitrous oxide.

‘There’s real concern over those much larger volumes.’

In June, a 16-year-old boy almost died after taking laughing gas at Parklife festival caused his lung to burst.

Alex Littler, from Ellesmere Port, Cheshire, was rushed to hospital on Monday 20 June after complaining of a swollen neck, breathlessness and that his chest felt like ‘popping bubble wrap’ when touched due to the air leaking from a ruptured lung.

The year 11 student was forced to confess to doctors and devastated mother Cathy McCann, 44, that he’d inhaled nitrous oxide over the weekend while at Parklife music festival in Heaton Park, Manchester, on June 11 and 12. 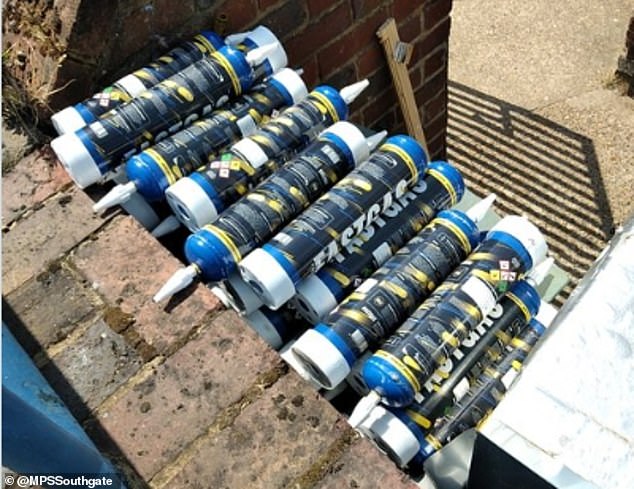 In Southgate, north London, local officers have repeatedly come across large piles of the supersized canisters in public spaces 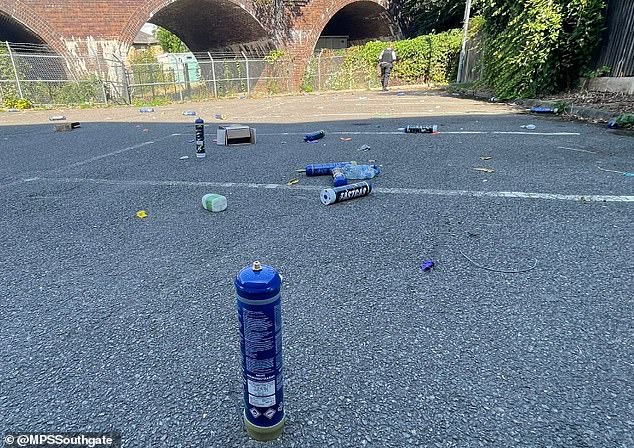 He was diagnosed with a ruptured and leaking lung and told he was lucky to be alive but medics warned he may need surgery to remove air that was trapped around his lungs and heart.

Nitrous oxide is bought in cannisters and used legally for anaesthesia or as a propellant for whipped cream, however it is often pumped into balloons to be inhaled by those hunting for a ‘high’.

Beauty therapist Cathy says the ordeal was ‘terrifying’, with Alex having vowed never to inhale the drug again, admitting that he ‘didn’t know the dangers’. 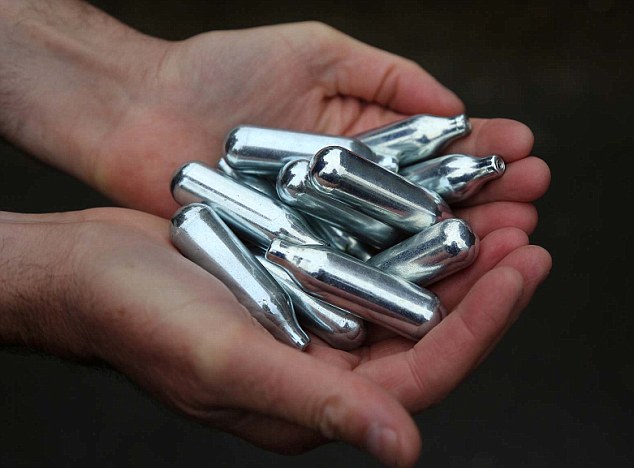 Nitrous oxide is regularly taken by young people at parties and festivals, and the small silver canisters it is usually sold in have become a familiar sight in town centres and parks