Such eruptions, last seen nearly a century ago, have been a threat since Kilauea, one of the world's most active volcanoes, erupted nearly two weeks ago. 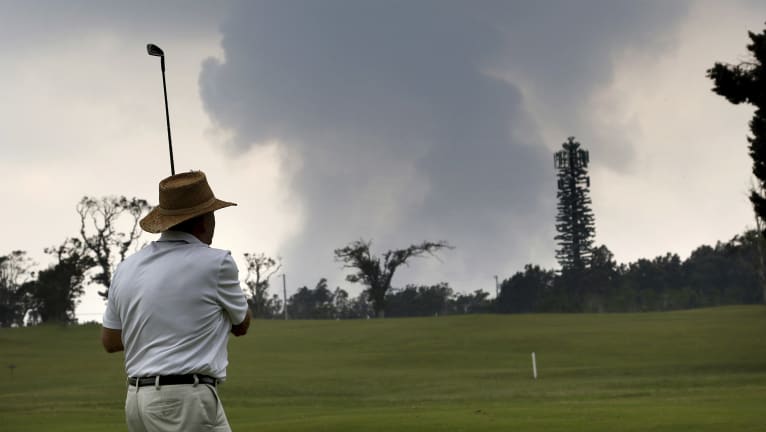 A golfer watches an ash plume rise from the summit of Kilauea volcano on Wednesday.

The explosive, steam-driven eruptions could drive a 6100-metre ash plume out of the crater, hurl boulders the size of small cars up to 800 metres and scatter smaller rocks over 20 kilometres, the USGS has warned.

This type of eruption has the potential to carpet the Big Island in much thicker ash falls than those up to now and possibly spread ash and volcanic smog across the Hawaiian islands and further afield if it enters the stratosphere.

"This morning dense ballistic blocks up to 60 centimetres across were found in the parking lot a few hundred metres from Halemaumau [Kilauea's crater]," the USGS said in a statement.

"These reflect the most energetic explosions yet observed and could reflect the onset of steam-driven explosive activity." 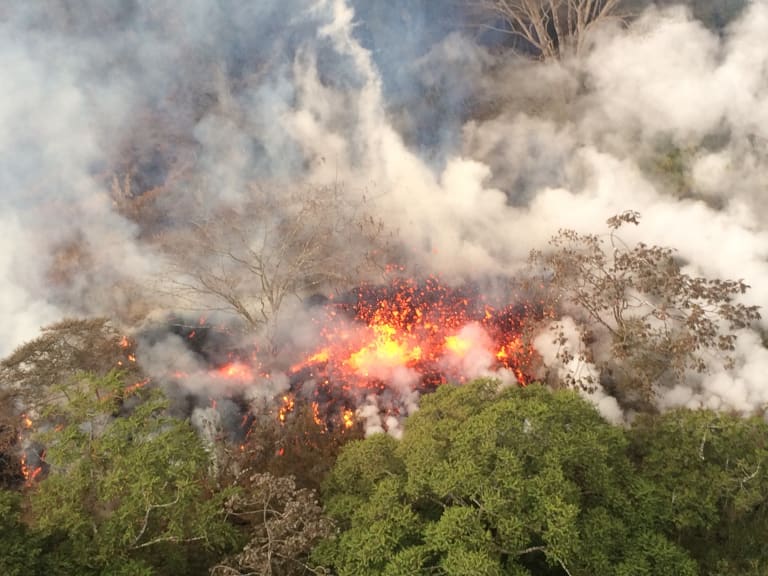 Lava spatters from an area between active fissures 16 and 20 on the lower east rift of the Kilauea volcano, near Pahoa, Hawaii, on Wednesday morning

The USGS cautioned that "additional such explosions are expected and could be more powerful".

Ash is a new hazard for Hawaii's Big Island, already grappling with volcanic gas and lava that has destroyed 37 homes and other structures and forced the evacuation of about 2000 residents from communities in the south-east Puna district.

Smog from the volcano drifted north up the island chain after communities south of its summit were warned of ash fall up to a 60 millimetres as the nearly two-week eruption intensified. 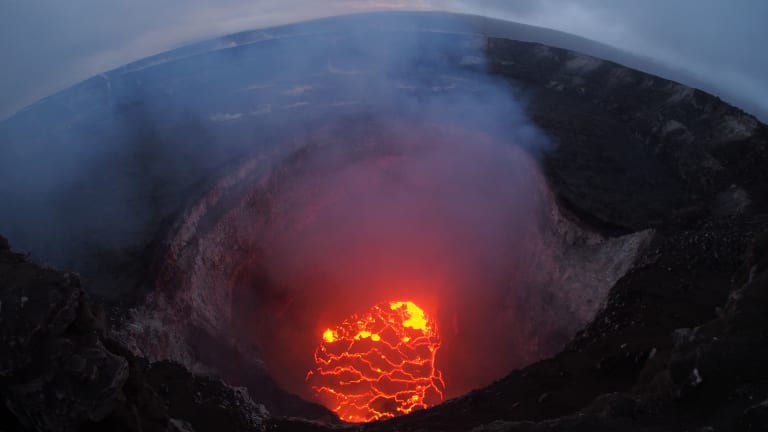 A wide-angle camera view captures the entire north portion of the Overlook crater on May 6 as Hawaii’s Kilauea volcano erupts.

On Tuesday, ash plumes had spouted as high as 3600 metres, scientists said, although on Wednesday ash emissions had decreased, prompting the cancellation of an ash fall advisory.

The Hawaiian Volcano Observatory said occasional bursts of ash were coming from the crater causing ash to fall downwind to several communities, although there were only trace amounts.

These plumes are separate from the lava eruptions happening about 40 kilometres away from the summit.

Lava has burst from 21 giant ground cracks or fissures and torn through housing developments and farmland, threatening two highways that are exit routes for coastal areas. 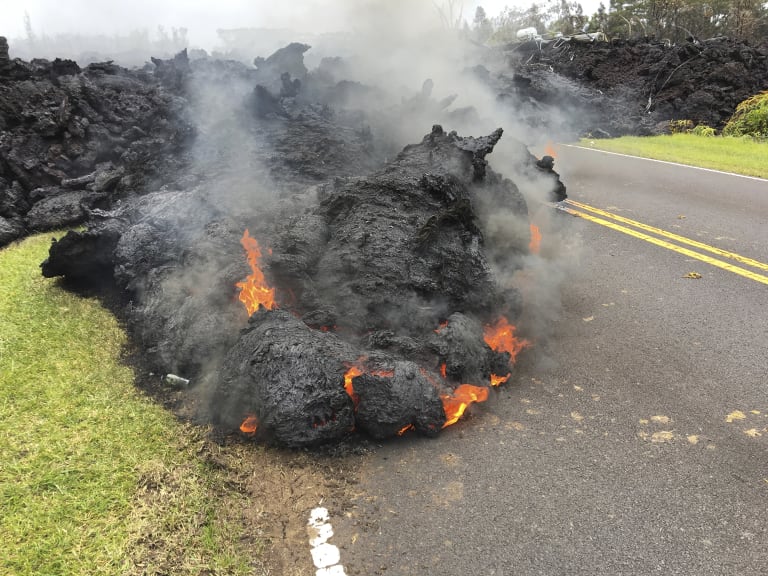 Lava from the Kilauea volcano moves across the road in the Leilani Estates in Pahoa, Hawaii, on May 5.

Several fissures shot lava into the air on Wednesday but one flow had not advanced any further towards coastal Highway 137, which remained about two kilometres distant, the County of Hawaii Civil Defence said in a statement.

Earthquakes continue to shake the Big Island, with the most severe about 8.30am on Wednesday, producing a 4.4 magnitude quake. The Pacific Tsunami Warning Centre said there was no risk of a tsunami.

Hawaii Governor David Ige said the state was forming a joint task force that could handle mass evacuations of the Big Island's Puna district if lava from the volcano covered major roads and isolates the area. The troops may be needed for emergency evacuations, search and

rescue, clearing debris and other duties.

On Tuesday, the volcano discharged ash because of rocks falling into the summit, US Geological Survey geophysicist Mike Poland said.

"There is very little wind at the summit," he said on Wednesday. "The plume, it's not near as ashy as it was yesterday, and it's rising more or less vertically over the summit region."

Because of the ash, USGS scientists operated from a back-up command centre at the University of Hawaii at Hilo.

Poland did not have an immediate height on the plume on Wednesday since scientists were not staffing the observatory at the summit. They will have to rely on remote observations, he said.

"Things seem to be progressing largely as they have been, except for a shift in wind and less ash," Poland said.

Scientists remain on alert for more violent activity. Geologists have warned that the summit could have a separate explosive steam eruption that would hurl huge rocks and ash kilometres into the sky. But it's not certain when or if that might happen.

For those on the ground near the lava vents, health warnings have been issued because of dangerous volcanic gases.

An air-quality alert was in effect for an area near the Lanipuna Gardens subdivision. That area was evacuated shortly after the eruption began on May 3. Most fissures are in that subdivision or the adjoining Leilani Estates neighbourhood.

No serious injuries or deaths have been reported from the eruption.