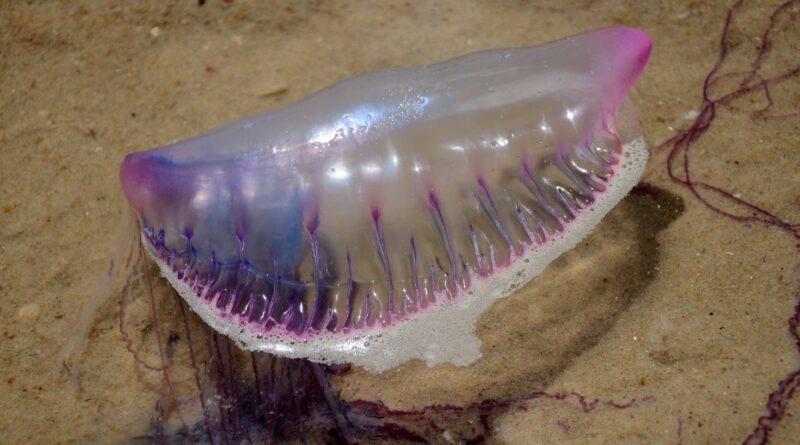 Brits are being warned to keep an eye out as giant "killer" jellyfish are set to hit UK beaches during this week's heatwave.

The imposing sea creatures can grow tentacles up to 160ft – equivalent to the size of five double-decker buses.

The news comes as the UK bakes in a record-breaking heatwave with thousands flocking to the coast to cool off.

But people should remain vigilant as Portuguese man o’ war jellyfish have an incredibly powerful sting and can cause agony to anyone unfortunate enough to get caught out.

While rare – there were just 62 reported sightings in the UK last year – windy weather and strong tides can see them wash up on our beaches.

Children and the elderly are particularly at risk from their unsuspecting stings.

Leatherback turtles head to UK seas in summer to feast on the jellyfish, which are actually a floating colony of very small animals, so if you spot a Portuguese man o’ war then a turtle may not be too far away either.

Beach-goers are urged to keep clear and stay away from the oval-shaped, transparent jellyfish to avoid any painful injuries.

They have been known to occasionally kill humans.

Beaches up and down the country will be heaving over the next few days as the UK is set to scorch, with some temperatures hitting above 32C.

An increase in temperature doesn't impact the amount of jellyfish that may invade UK shores, but it's important sunbathers are aware of the dangers and the signs to look out for.

To stay up to date with all the latest news, make sure you sign up for one of our free newsletters here .

In 2010, Maria Furcas, 69, suffered an allergic reaction and died after being stung on the leg by a Man o' War as she swam with her sister at Porto Tramatzu near Cagliari in Sardinia, The Sun reports.

And in 2018, Verity Stainton, 13, left the sea covered in burns after being wrapped up by the jellyfish while swimming near Mablethorpe, Lincolnshire.

Kate Lally was "attacked" by a jellyfish last summer, while taking a dip to cool off at Formby Beach in July 2021.

"At first it felt like a wasp sting, over a bigger area of skin," she wrote in the Liverpool Echo.

"Then it started to burn, and I washed it with hot water when I got home, as per NHS guidance. After that, there was no sign of my stings and I couldn't feel anything either.

"But after a night's sleep, I woke up with horrendous, hot, itchy markings on my arm and both upper legs. Standing outside in the hot weather today makes them throb."