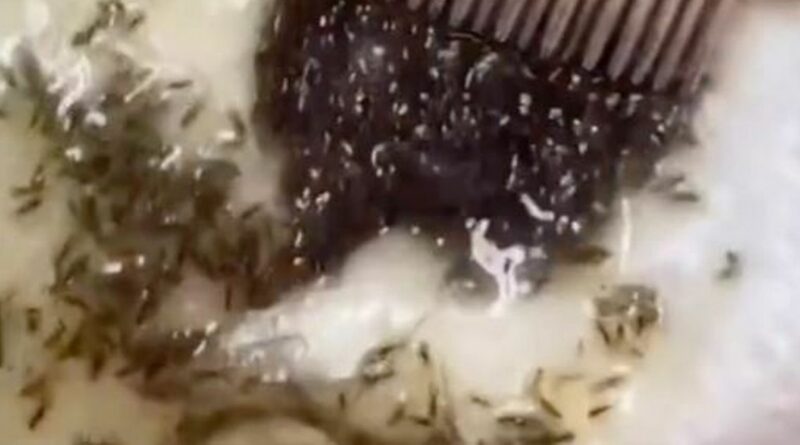 An horrific case of head lice infestation has gone viral on TikTok after a poor girl who had reportedly struggled with the infestation for five years was living with "thousands" of creepy crawlies in her hair.

A team of experts known as The Lice Angels – based in Los Angeles, US – took to the popular video-sharing platform to share the stomach-churning video.

It shows a girl with long brown hair sitting in a white plastic chair while an anti-lice treatment is applied to her scalp.

Experts in heavy-duty plastic gloves are seen spraying the girl’s hair and running a lice comb through it — but the vid takes a disturbing turn as hundreds of wriggling bugs are caught in a single sweep.

The clip's caption simply reads: "Don't look. You might get sick. Worst lice case ever."

And viewers were quick to display their disgust at the poor girl's plight too.

One wrote: “Omg that scalp turned into an entire ecosystem.”

With a second commenting: "“I’ll simply shave my hair if I had that.”

Another wrote: “That’s not hair anymore, that’s a zoo.”

The Daily Star has previously reported how a young girl battled a horrible head lice infestation that left her with bugs crawling on her body and sucking blood from her face.

Hairdresser Rachel Maroun, from Sydney in Australia, works as a head lice technician and was asked to give a scalp treatment for the poor 13-year-old girl.

In a video that will make your skin crawl, countless tiny bugs can be seen writhing in between the strands of hair and covering almost all of her scalp.

She says: "As you can see these lice are just having an absolute rave in her hair, they have just completely taken control."

Rachel mentioned in the video that it was not a case of neglect but that the child had special needs and "wasn’t able to communicate that she had lice until much later".

The post went viral, racking up 8.8 million likes and being viewed 74 million times.