Girl, 13, dangles from live electricity wires for an hour after falling from a Russian railway bridge while taking a selfie

A girl miraculously survived after falling from a railway bridge while taking a selfie on to two live 3,000-volt electric cables where she dangled for an hour before being rescued.

The 13 year old, from central Russia, suffered severe burns and was ‘writhing in excruciating pain’. She was not killed from electrocution because she did not touch the ground.

A quick-thinking train driver saw her hanging by the midriff from the wires and radioed ahead to cut power to the high voltage cable. 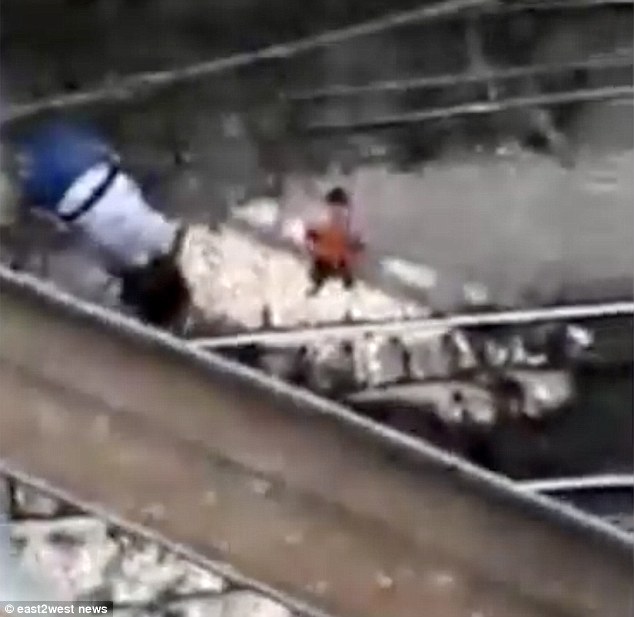 In the clip, the 13-year-old girl is seen bent over two live 3,000-volt electric cables as a man below tries to work out how to help her 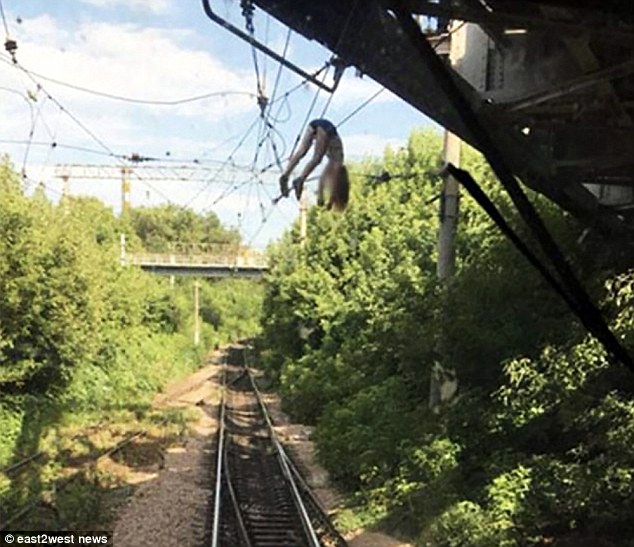 The girl, from a rural area in central Russia, was seen writhing in pain and was dangling from the wires for more than an hour 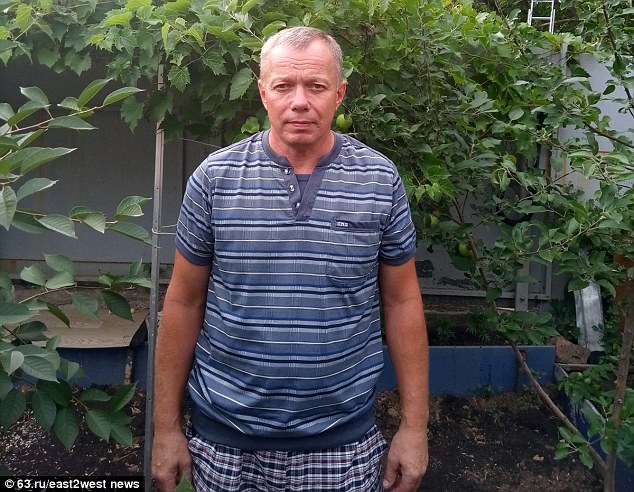 Alexander, pictured, used a tow rope to pull the girl back to the bridge as other villagers held a rug below in case she fell 13ft on to the track below

A passerby then used a tow rope to pull the girl back to the bridge as other villagers held a rug below in case she fell 13ft on to the track below.

The girl was returning home from swimming in a river with a group of friends in a rural area of central Russia when she climbed on to the side of the bridge to take a selfie as a cargo train approached.

‘The girl decided to take a selfie and paused at the bridge as they were crossing it,’ said Yulia Makova, an official with the prosecutor’s office in Ulyanovsk region.

‘She climbed across the rails. Her female friend was chatting on her phone.

‘The friend heard a shriek and turned to see the girl hanging on the cables. She doesn’t know how it happened.’

It is unclear if the friend alerted the emergency services, but she was dangling from the wire for an hour until she was noticed by a train driver. 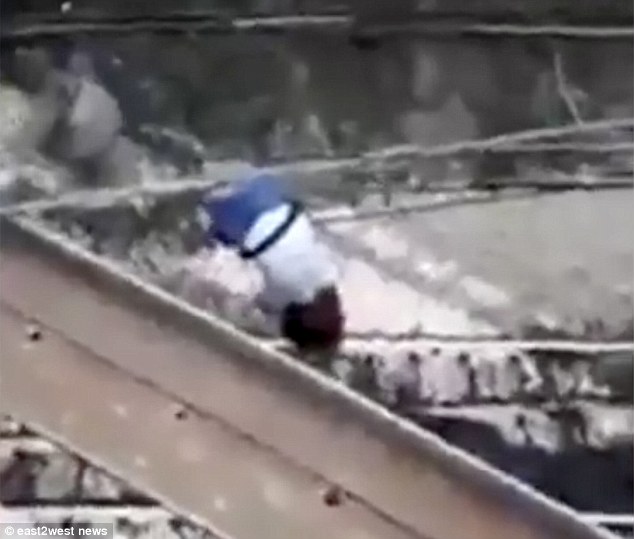 The train driver who spotted her and radioed ahead to cut power to the high voltage cable said: ‘She was hanging there, so tiny and helpless. She looked lifeless like a rag on a fence’ 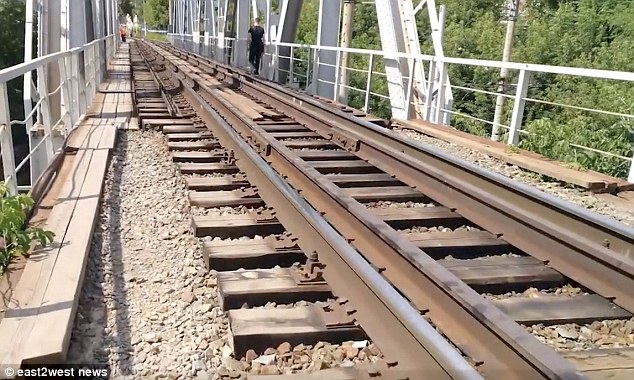 She had been taking a selfie on this railway bridge when she fell. A friend she was with heard a shriek but does not know how she fell

As he approached the bridge he saw ‘something strange hanging on the wires’.

‘I couldn’t believe my eyes when I realised that this must have been a human – a girl,’ he said.

‘She was hanging there, so tiny and helpless. She looked lifeless like a rag on a fence.’

He used the emergency brake to stop the train and called his controller to cut the electricity supply.

He added: ‘Her body was writhing from excruciating pain, but she was aware of what was happening and was calling for help.’

A local man named Alexander who heard her screams said: ‘I rushed there and saw a blood-freezing scene.

‘We called the emergency services, and then railway workers ran to us to confirm that wires had been switched off.

‘I realised I could help. I moved a tow cable to go under her arms, and pulled her up back to where we could reach her. 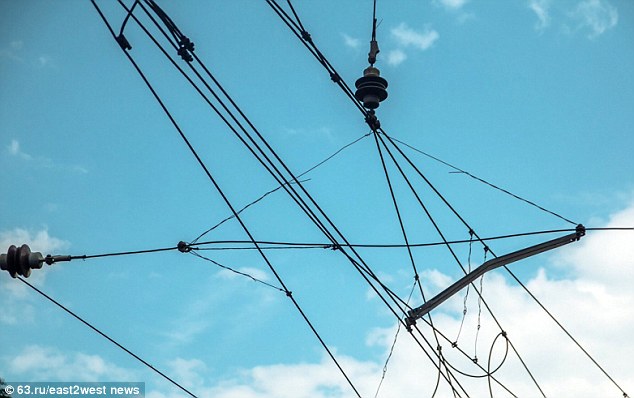 The girl spent more than an hour dangling from these wires. Alexander said: ‘I honestly didn’t expect her to make it, and I was incredibly happy to hear that she survived’ 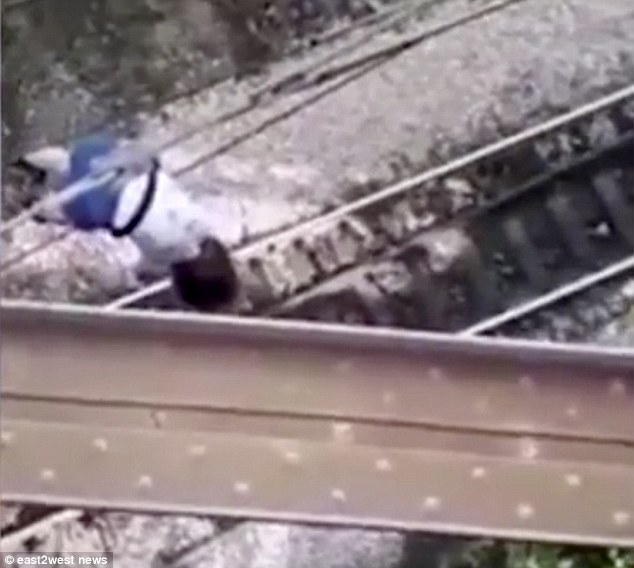 The teenagerwas rushed to Pirogova hospital and diagnosed with second and third degree burns to both arms, shoulders, wrists, and left foot

‘I was dead scared that she would fall down, so several people were holding a carpet above the rails as I was doing it.’

He added: ‘She looked right into my eyes and told me her name and address, and a second later she was unconscious.

‘Her body was badly burned. I was so shocked by this that I didn’t even remember her name.

‘I was so worried for her. I honestly didn’t expect her to make it, and I was incredibly happy to hear that she survived.’

The teenager, who has not been named, was rushed to Pirogova hospital and diagnosed with second and third degree burns to both arms, shoulders, wrists, and left foot.

She suffered a head injury and ‘electrical traumas and bruises on both legs’. When she woke up, she had no memory about what happened, doctors have said.