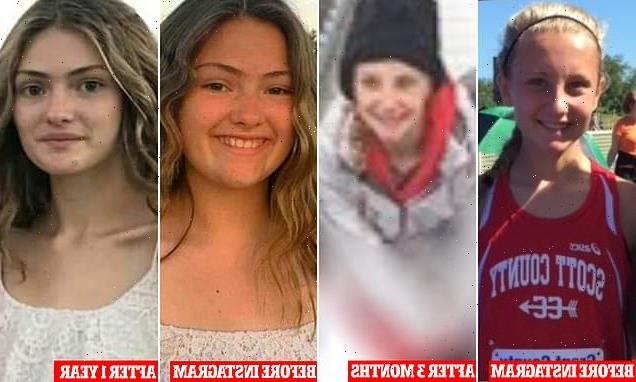 Shocking decline of two teenage girls after they started using Instagram as their mothers sue the app for driving them to starve themselves, exercise obsessively and even attempt suicide

The shocking decline of two happy, pre-teen girls after they became obsessed with their weight and calorie intake is laid bare today in new photographs as their mothers sue Instagram, claiming the app drove them to starve themselves and, in one case, attempt suicide.

They claim the app targeted their daughters – and millions of other vulnerable girls – with calorie-restrictive recipes, photos of skeletal models and a fatal algorithm which pushed both to the top of the girls’ feeds. 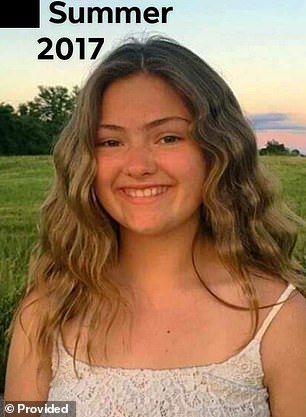 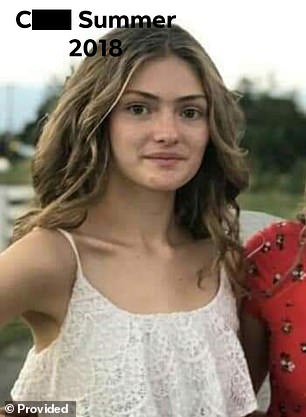 This 12-year-old girl from Kentucky, named in court documents as CN, became obsessed with calorie-restricting diets on Instagram. She lost a startling amount of weight in a single year, then tried to kill herself

Alex Martin, another girl from Kentucky, became so obsessed with being thin that she lost 20lbs in three months. She is shown, right, at her lightest, after using Instagram for three months

In Wuest’s daughter’s case, she tried to take her own life after writing in letters about the crippling societal pressure to be thin and beautiful.

Their cases are the latest in a growing number of damning examples that suggest how the app is harming young people’s mental health, particularly that of impressionable teenage girls.

Wuest’s daughter is named only as CN in the lawsuit. It describes how they started scouring Instagram together for recipes in 2017, when CN was 12.

At first, she would use the app to look for recipes for sweets and treats that she sent to her mother. 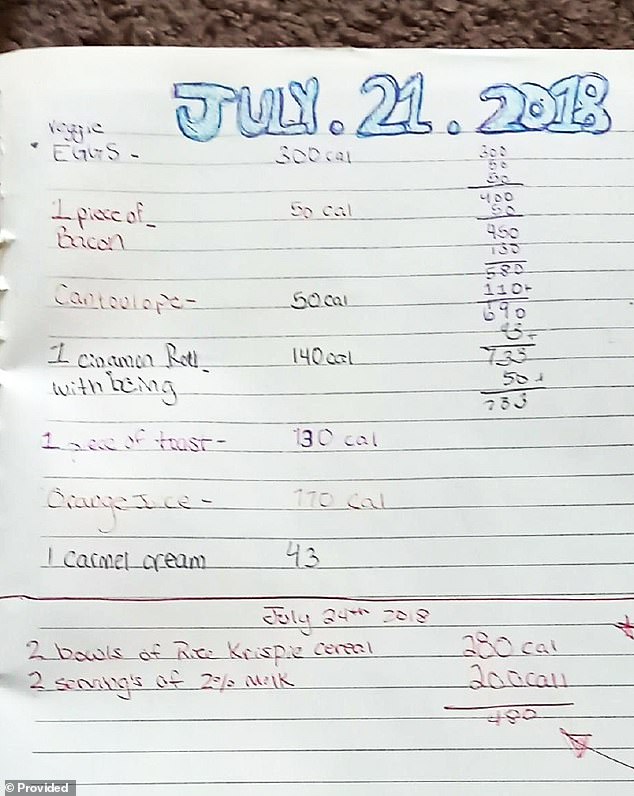 One of the diets that the first girl put herself on in 2017, after being targeted with recipes 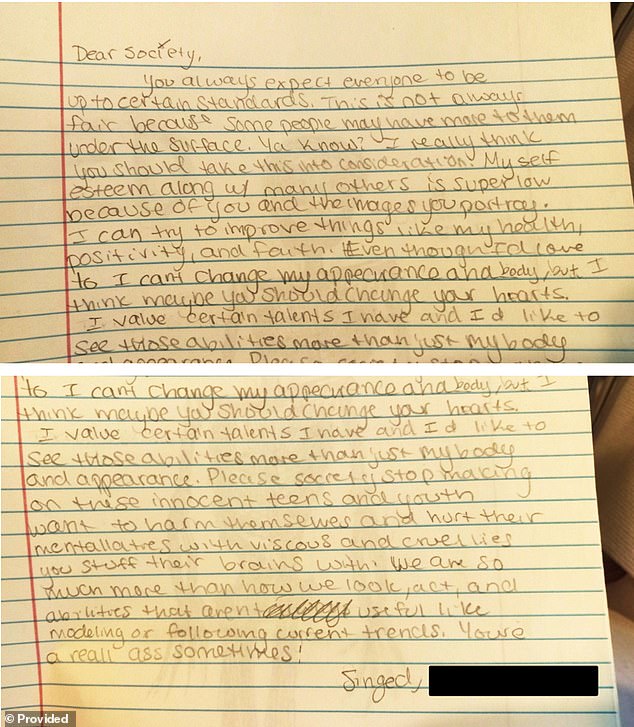 While in the throes of the eating disorder, the Wuests’ daughter wrote this saddening note about how society made her feel a crippling need to be thin 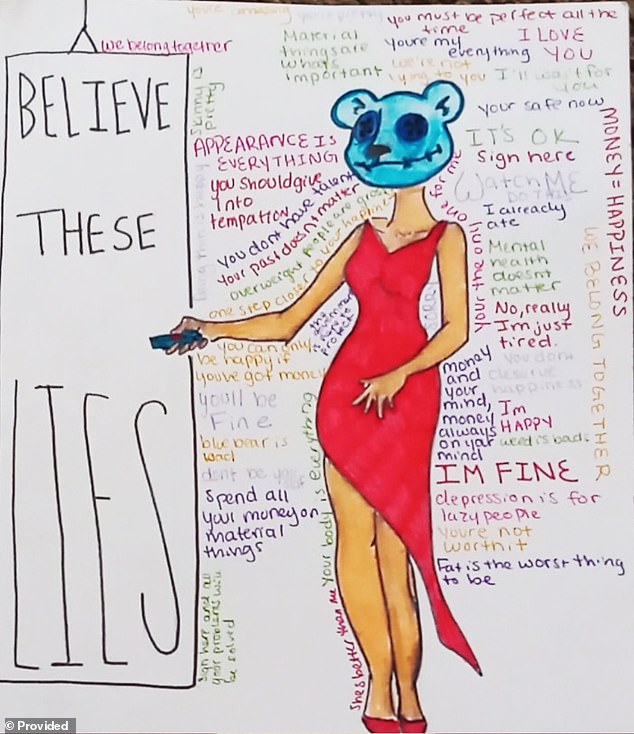 Wuest claims that soon after she downloaded the app, CN stopped sending recipes and became ‘preoccupied’ with the idea that she needed to be slender.

After a while, however, she stopped sending recipes and became preoccupied with the idea that she needed to be slender. By sixth grade, the recipes stopped entirely.

Alexandra’s parents claim she was perfectly happy with her figure until she started using the app, but that she quickly shed 20 lbs after having images of statuesque models shoved in front of her every day.

Their allegations against Instagram compound the widely-held view that the app is harming young girls’ health. 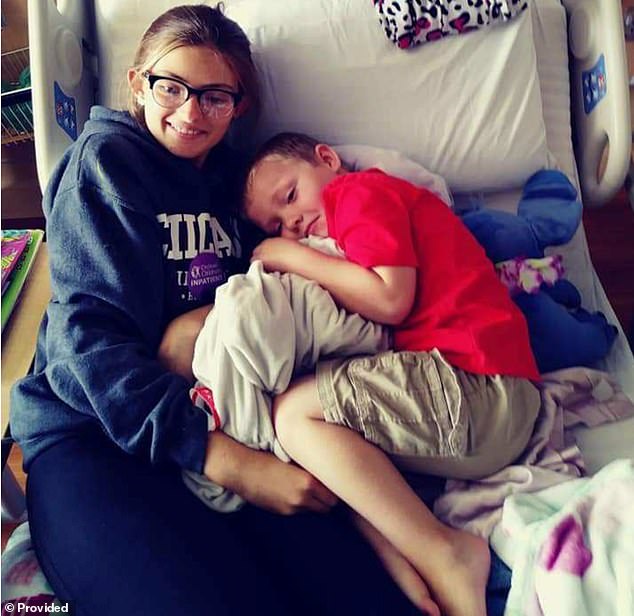 The Wuest family sought treatment for their daughter in 2018. She is shown above with her younger brother in a photo supplied by the family in their lawsuit 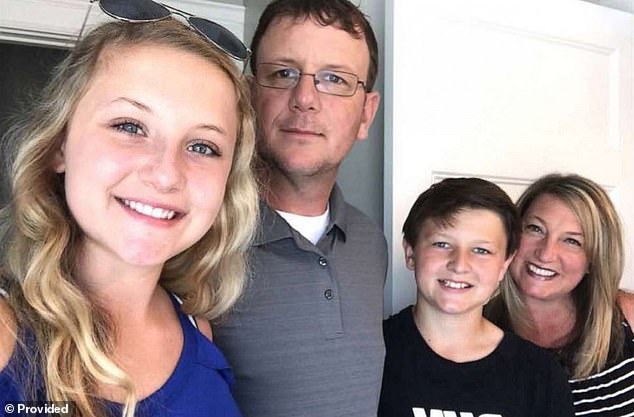 Alex Martin also received help and is at a healthier weight. She is shown with her family