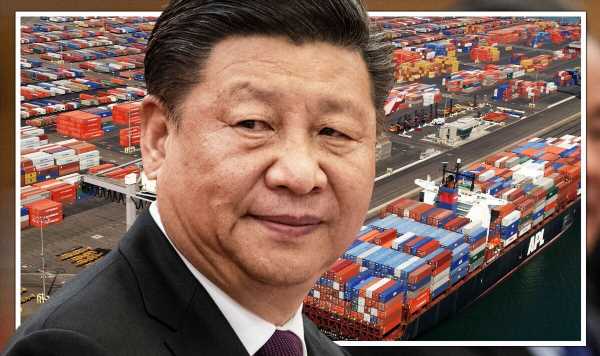 In response to reports of challenges in China’s agricultural heartlands, Eli Dourado, a senior research fellow at the Centre for Growth and Opportunity at Utah State University, commented: “It is baffling to me that very few if any of you are freaked out by the likelihood of a global supply-side recession.” It comes as Beijing continues efforts to eliminate the spread of COVID-19 with strict lockdowns and border controls.

However, consumption in China has been dampened, real estate has slowed and global trade disrupted amid the country’s worst outbreak to date.

The biggest short-term challenge for Beijing is the tough new Covid rules at a time of heightened geopolitical risks in the wake of Russia’s invasion of Ukraine, which has intensified supply and commodity cost pressures.

It led analysts to say authorities in China are walking a tight rope as they try to stimulate growth without endangering price stability.

However, data from the National Bureau of Statistics showed on Monday GDP expanded by 4.8 percent in the first quarter from a year earlier, beating expectations.

Analysts warn that data for this month will likely be worse, with lockdowns in Shanghai and elsewhere dragging on.

That has prompted others to warn of rising recession risks.

Iris Pang, Greater China chief economist at ING said: “Further impacts from lockdowns are imminent, not only because there has been a delay in the delivery of daily necessities, but also because they add uncertainty to services and factory operations that have already impacted the labour market.”

“We may need to revise our GDP forecasts further if fiscal support does not come in time.”

READ MORE ABOUT A UK SHOW OF FORCE TO PUTIN

Data on March activity showed retail sales contracting the most on an annual basis since April 2020 on widespread COVID curbs across the country.

They fell 3.5 percent, worse than expectations for a 1.6 percent decrease and an increase of 6.7 percent from January to February.

The jobs market showed signs of stress in March, which is usually a robust month for the Chinese labour market as factories resume hiring after the Lunar New Year holiday.

China’s nationwide survey-based jobless rate stood at 5.8 percent in March, the highest since May 2020.

The industrial sector held up better with production expanding five percent from a year earlier, compared with forecasts of a 4.5 percent gain.

This was still down from a 7.5 percent increase seen in the first two months of the year.

Such disruptions are rippling through global supply chains for goods ranging from electric vehicles to iPhones.

Mr Dourado tweeted: “Obviously I got the timing wrong on the tweet below but I feel like the scientists in Don’t Look Up.”

The remark was made in reference to a tweet he made in December predicting that Russia would invade Ukraine; Europe would freeze; China’s Zero Covid policy and ineffective vaccines would fail against Omicron and supply chain fallout from this could be legitimate.

The International Monetary Fund slashed its forecast for global economic growth by nearly a full percentage point on Tuesday, citing Russia’s war in Ukraine and warning that inflation was now a clear and present danger for many countries.

It warned that a further tightening of Western sanctions on Russia to target energy exports would cause another major drop in global output.

IMF Chief economist Pierre-Olivier Gourinchas said: “The war adds to the series of supply shocks that have struck the global economy in recent years.

“Like seismic waves, its effects will propagate far and wide through commodity markets, trade, and financial linkages.”

The IMF said other risks to the outlook include a sharper-than-expected deceleration in China prompted by the flare-up of Covid lockdowns.

With its high dependence on Russian fossil fuels, the European Union saw its 2022 growth forecast cut by 1.1 percentage points, while the UK now faces slower economic growth and more persistent inflation than any other major economy next year.

Mr Gourinchas said spill-overs from higher energy prices, a loss of confidence and financial market turmoil from this step would cut another two percentage points from global growth forecasts.