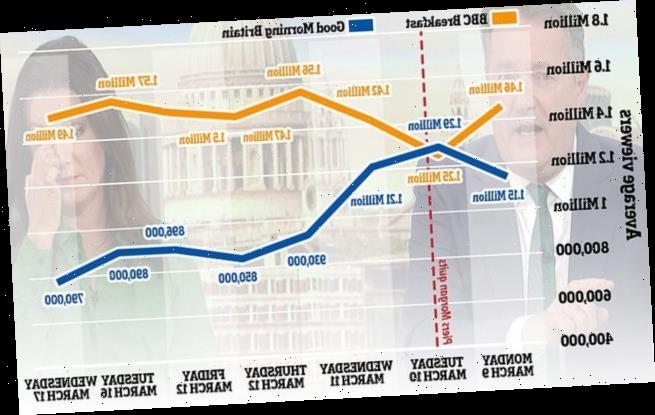 GMB loses another 100,000 viewers in a day after Piers Morgan sensationally quit amid row over Meghan Markle’s Oprah interview claims – as ITV show’s total audience plunges 40% in a week

Good Morning Britain lost a further 100,000 viewers yesterday as it recorded its joint lowest ratings over the past month – with the show having now lost nearly 40 per cent of its audience since Piers Morgan sensationally quit.

The ITV morning programme attracted roughly 800,000 viewers yesterday, which was the joint lowest recorded by ratings service Overnights.TV over the previous four weeks along with the Fridays of February 26 and March 5.

The audience was also 700,000 below the 1.49million who watched BBC Breakfast at the same time yesterday, and it comes after GMB pulled in roughly 900,000 viewers this Tuesday and Monday, and 850,000 last Friday.

The GMB audience is now down by 500,000 from the 1.29million who tuned in on Tuesday of last week – which was the first time the ITV broadcast had beaten its long-time rival BBC Breakfast, which had 1.25million.

That episode of GMB turned out to be Morgan’s final programme before he quit the show after claiming he didn’t ‘believe a word’ Meghan Markle said during her Oprah Winfrey interview, first broadcast on CBS on March 7.

The changing figures over the past week suggest GMB has lost hundreds of thousands of viewers who would either not normally be watching breakfast TV, or who had switched from watching BBC to ITV in the morning.

But there was better news for ITV’s share price today which was up by 1.3 per cent or 1.55p to nearly £1.24 on the FTSE 250 index in London this morning, having fallen to just above £1.22 at the close yesterday.

GMB was hosted yesterday by Susanna Reid and Ben Shephard, who was mocked for urging the Royal Family and the Duke and Duchess of Sussex to ‘share their truth’ and ‘hopefully start healing’ after private talks were leaked. 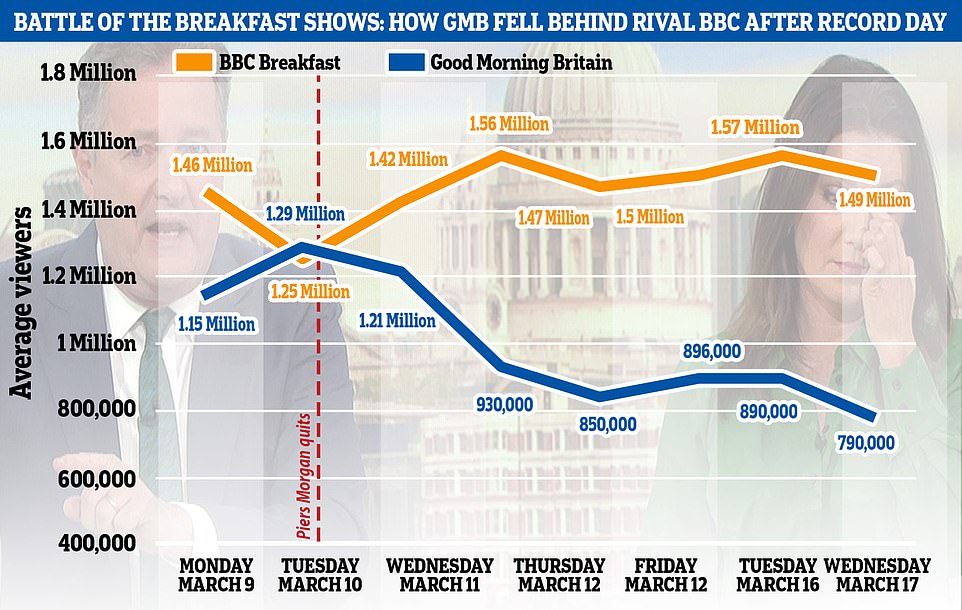 Piers Morgan is pictured near his home in West London last Wednesday, the morning after he quit Good Morning Britain 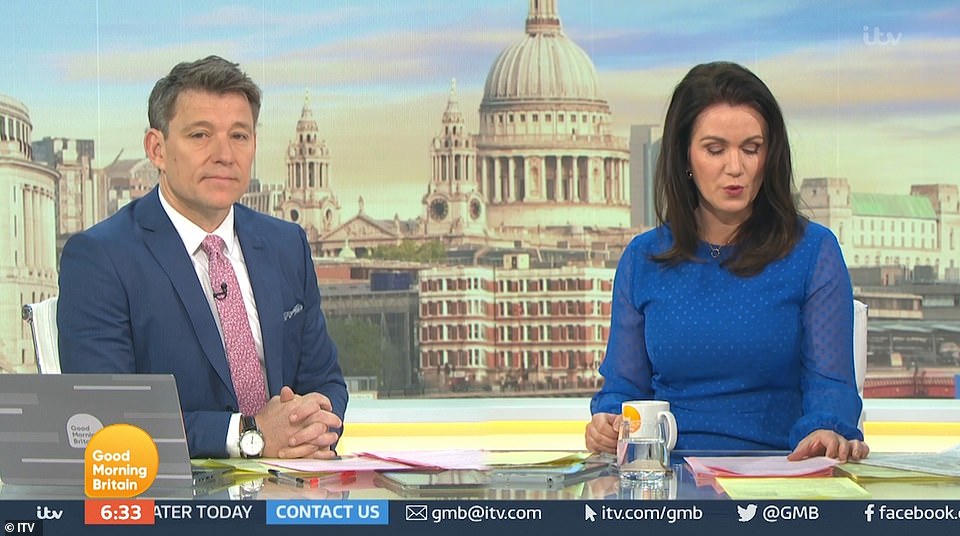 Shephard, who added that it was important for all parties ‘to be honest with each other’, was accused by Reid of ‘sounding like a Californian therapist’ while Ranvir Singh joked that he needed to get his ‘teeth whitened’.

Morgan’s comments about the Duchess of Sussex’s interview last week led to the highest number of complaints in the TV regulator’s history. The episodes of GMB on March 8 and 9 sparked 57,121 complaints to Ofcom.

Bookmakers have now made Victoria Derbyshire the external frontrunner to replace Piers Morgan on Good Morning Britain. The BBC journalist has seen her odds of hosting GMB cut from 10/1 to just 4/1 after reports suggested ITV bosses were keen on signing her up.

The latest odds from Ladbrokes are:

But Morgan responded on Twitter yesterday, writing: ‘Only 57,000? I’ve had more people than that come upand congratulate me in the street for what I said. The vast majority of Britons are right behind me.’

ITV announced Morgan had left the show on the evening of March 9, shortly after Ofcom said it had launched an investigation under its harm and offence rules after receiving more than 41,000 complaints in two days.

It later emerged that Meghan also made a formal complaint to Ofcom about the TV host after he dismissed her account of suffering suicidal thoughts and experiencing racism at the hands of the Royal Family.

Morgan said on-air that he ‘didn’t believe a word’ of her interview with chat show host Oprah when she laid bare claims of her struggles.

She raised concerns with the broadcaster about the effect Morgan’s comments may have on the issue of mental health generally and those attempting to deal with their own problems – and not about his attack on herself.

After a clip aired of Meghan discussing her issues with mental health and suicidal thoughts and royal officials’ knowledge of them, Morgan said during Monday’s programme: ‘I’m sorry, I don’t believe a word she says. I wouldn’t believe her if she read me a weather report.’

Morgan’s final episode of the show saw him walk off the set after a heated exchange with co-star Alex Beresford, in which Beresford accused Morgan of ‘trashing’ Meghan.

Morgan has stood by his comments and said his departure from GMB was caused by the ‘cancel culture that is permeating our country’.

The complaints about Morgan’s comments far exceed those made about about Celebrity Big Brother in 2018 when ex-Emmerdale actress Roxanne Pallett alleged she had been assaulted by fellow housemate Ryan Thomas, which prompted 25,327 complaints.

Ofcom received around 24,500 complaints about Diversity’s performance on Britain’s Got Talent last year, which was inspired by the Black Lives Matter movement.

The controversy with Shilpa Shetty on Celebrity Big Brother in 2007 was previously the most complained about issue, attracting 44,500 complaints. 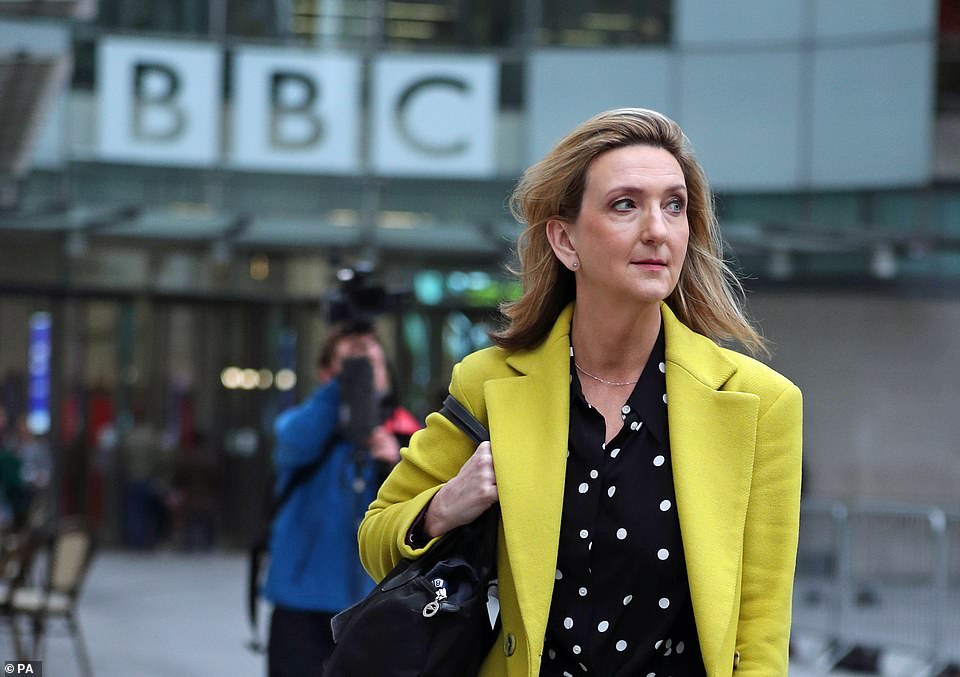 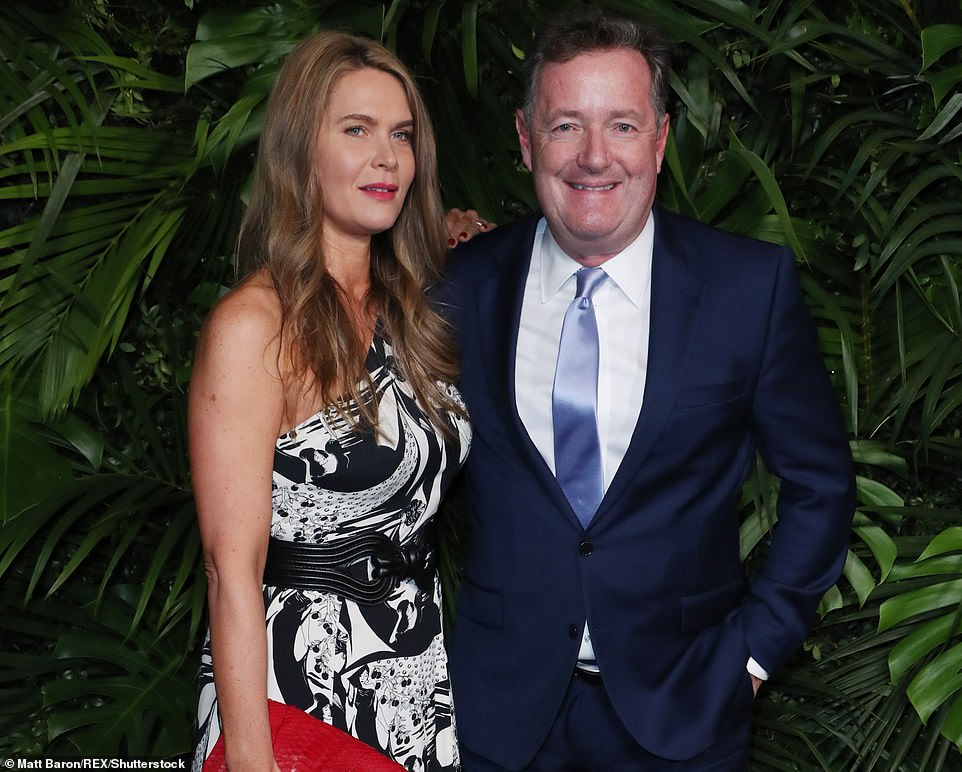 It comes as Morgan slammed American broadcaster Gayle King for acting as a ‘PR mouthpiece’ for the Sussexes to ‘facilitate their ongoing public trashing of our Royal Family’.

Morgan told the CBS This Morning presenter last night to do her ‘job as a journalist and ask them about all the lies they told’ in their interview with Oprah. He added in a tweet: ‘America should hear THE truth.’

Among the claims proven wrong were that Archie had a birthright to be a prince, he wouldn’t get 24/7 security because he wasn’t a prince and that Meghan had not seen her half-sister Samantha Markle in almost 20 years.

It comes after Miss King, 66, backed ITV’s stance over Morgan’s departure from GMB after he refused to apologise for his comments about Meghan, which led to the highest number of complaints in TV regulator Ofcom’s history.

She told her SiriusXM radio programme last Thursday: ‘Piers Morgan is no longer with a job. He stormed off the air after saying that I don’t believe that she had mental illness, I don’t believe she was suicidal.

Miss King also referred to Beresford, who was involved in the moment that saw Morgan walk out last week.