The Golden State Killer’s victims face him down in court: Relatives watch as wheelchair-bound 72-year-old ex cop is charged with 12 murders and 51 rapes – while cops scour his house for ‘trophies’

The former cop suspected of being the Golden State Killer gave weary and rasping answers as he made his first court appearance on Friday afternoon in a wheelchair.

Joseph James DeAngelo, 72, was shackled to the chair with handcuffs as he confirmed his name but did not enter a plea.

Asked if he had a lawyer, DeAngelo replied in a raspy voice: ‘I have a lawyer.’

A public defender has been appointed to represent DeAngelo.

The tense courtroom was filled with people who knew many of the suspected serial killers’ 12 murder and 51 rape victims.

Some were confronting the man who police believe attacked their friends and loved ones four decades ago in a terrifying rampage of violence across California. 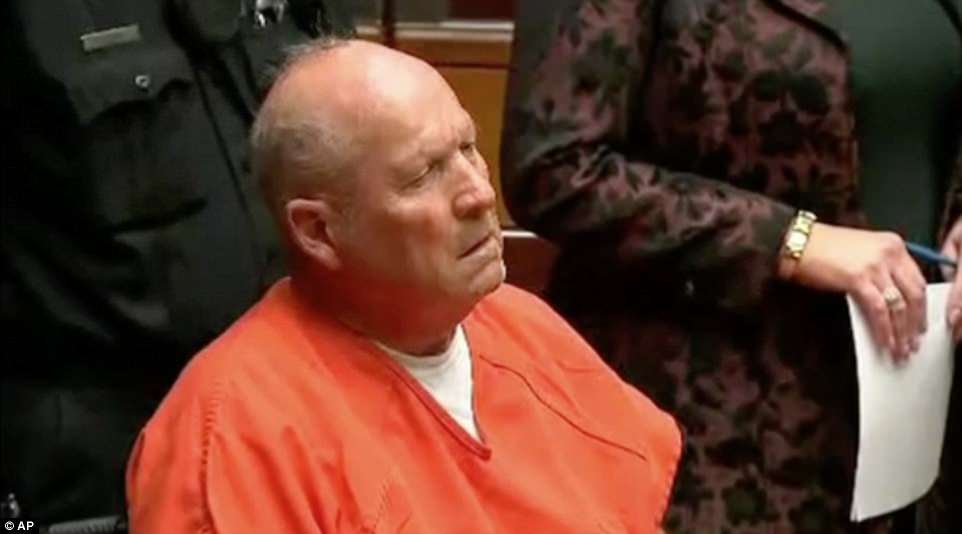 The accused Golden State Killer made his first appearance in a California courtroom on Friday. Joseph James DeAngelo, 72, was wheeled into court in Sacramento on Friday 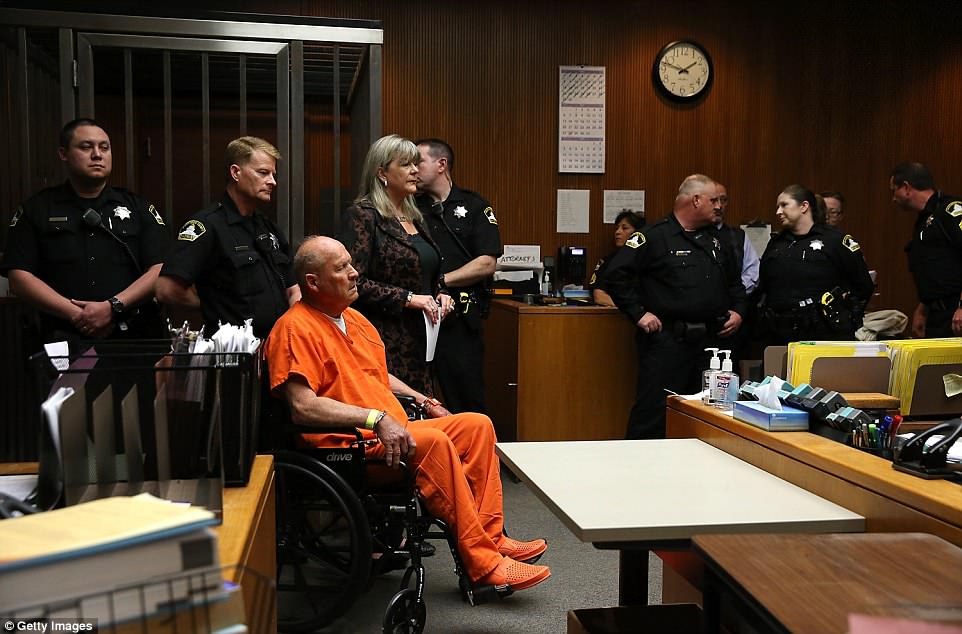 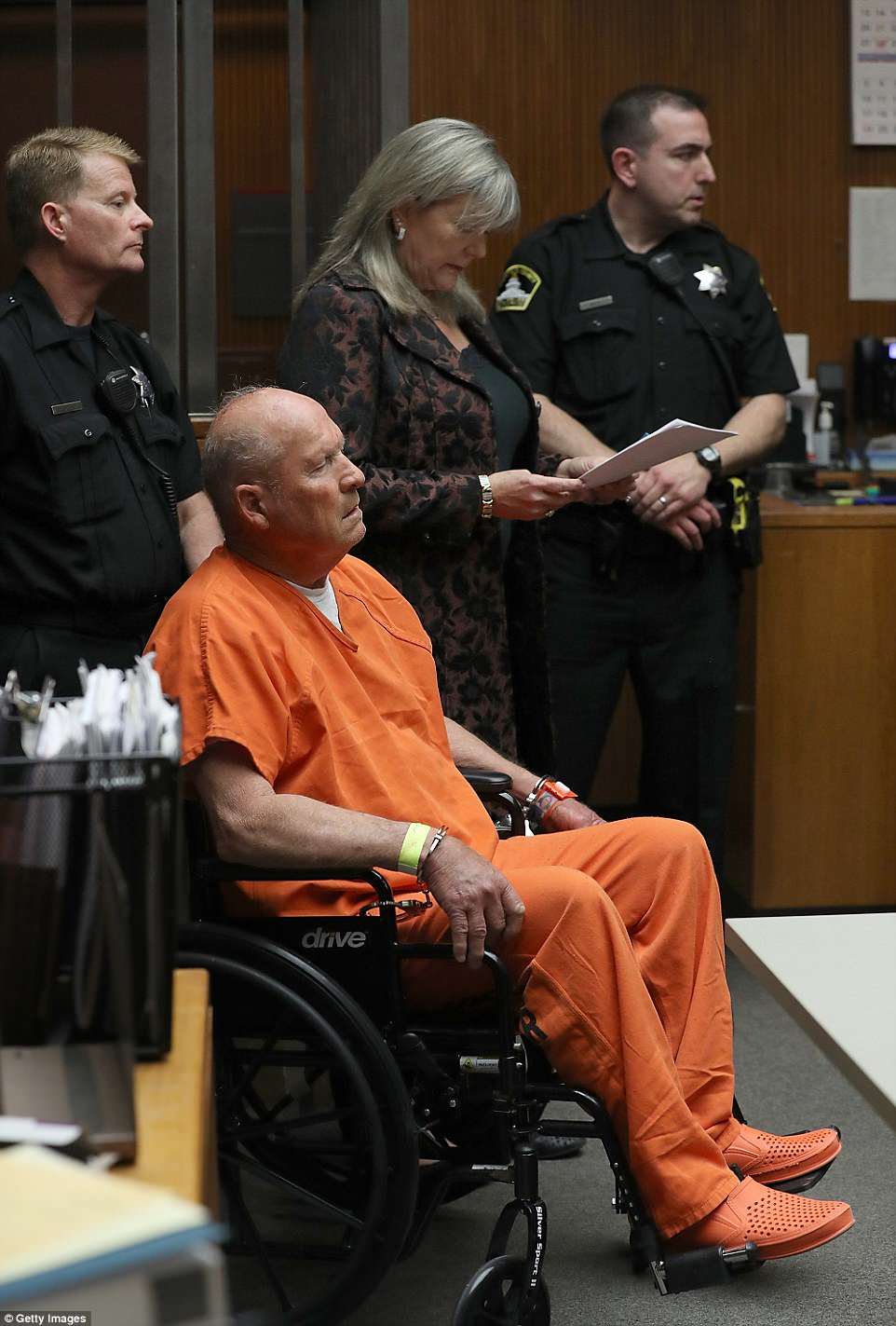 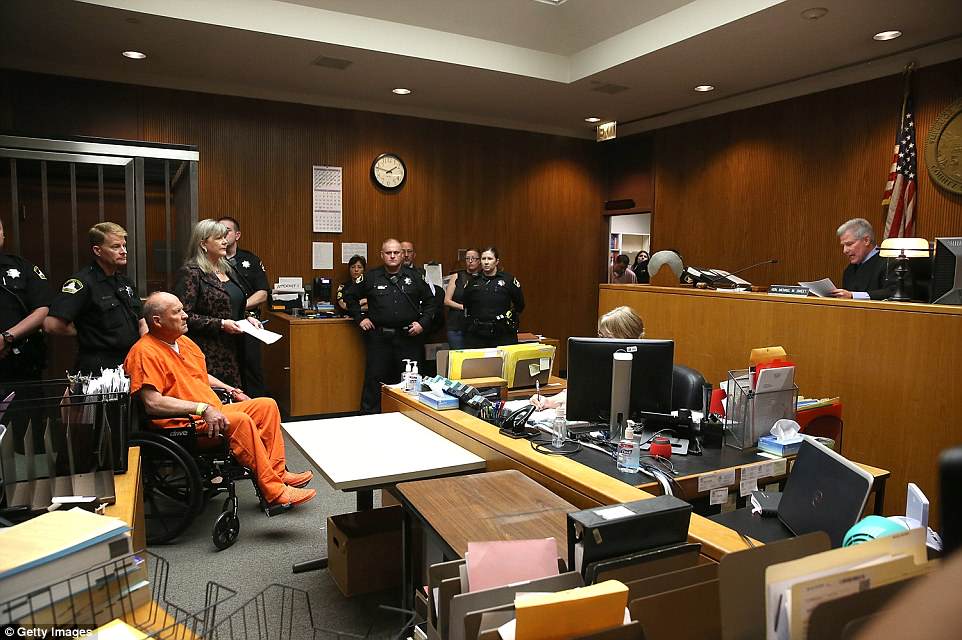 DeAngelo is also suspected of raping as many as 45 women from Sacramento, the Bay Area, and Orange County in the 1970s and 80s 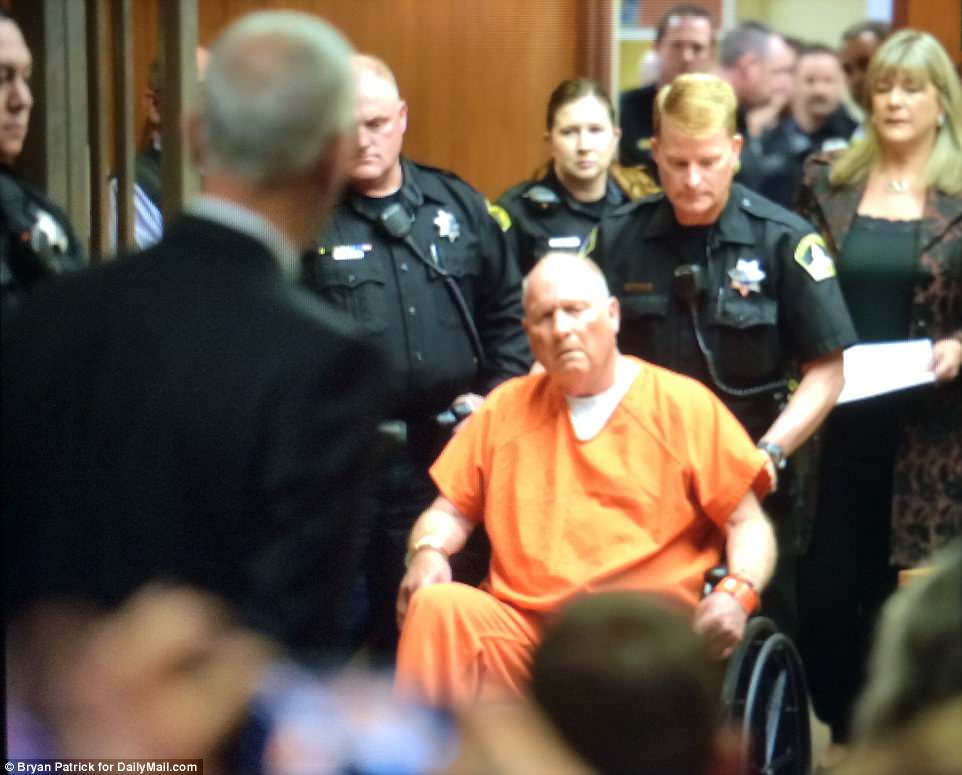 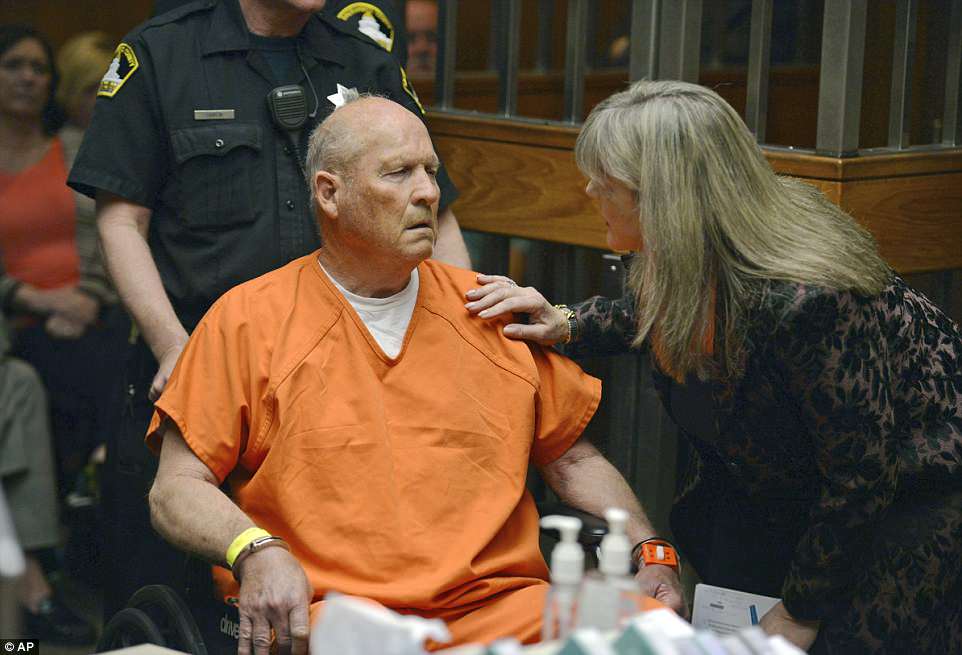 Public defender Diane Howard (right) speaks with DeAngelo in court. Howard was assigned to represent him 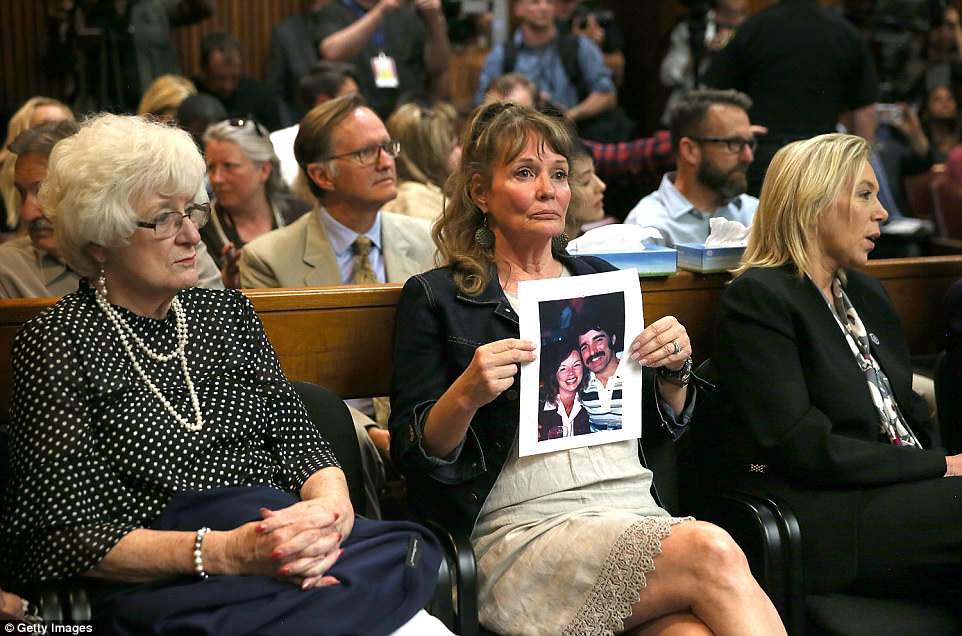 A woman (center) who attended the hearing holds a photo of Cheri Domingo and her boyfriend Gregory Sanchez, who were killed in 1981 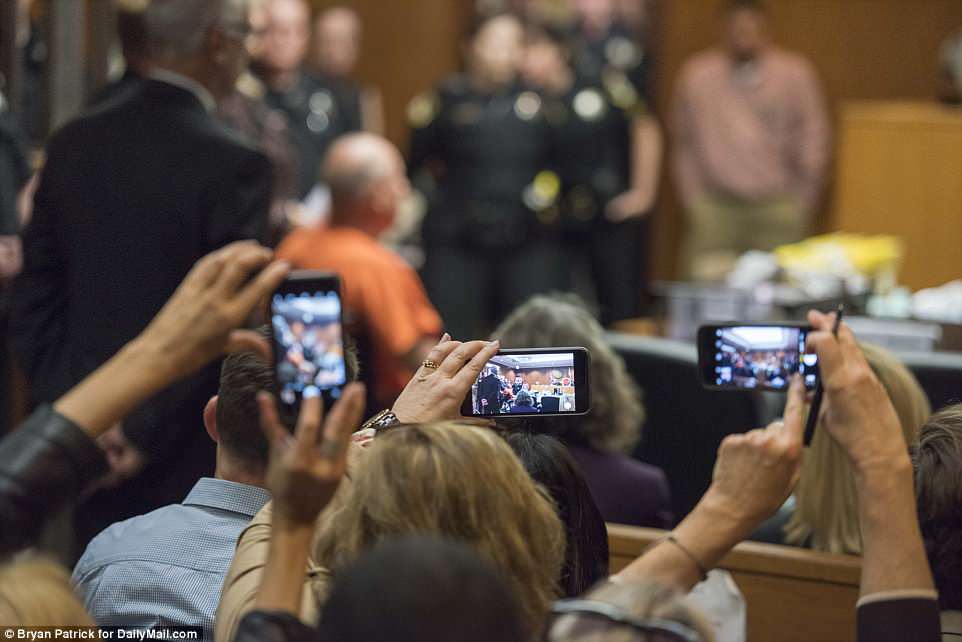 The case has attracted considerable interest from the public and the news media. Onlookers in court take photos with their cell phones 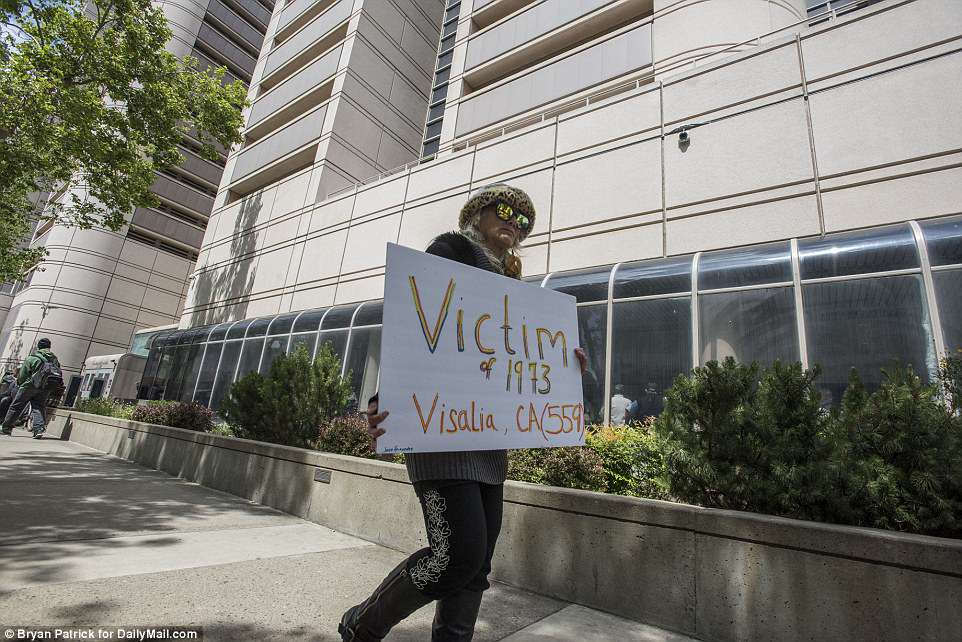 A woman is seen above outside the Sacramento court house holding a sign that says ‘Victim of 1973, Visalia, California.’ The Golden State Killer was also known as the ‘Visalia Ransacker’ who in the mid-1970s broke into hundreds of homes in central California and burglarized and vandalized a number of items 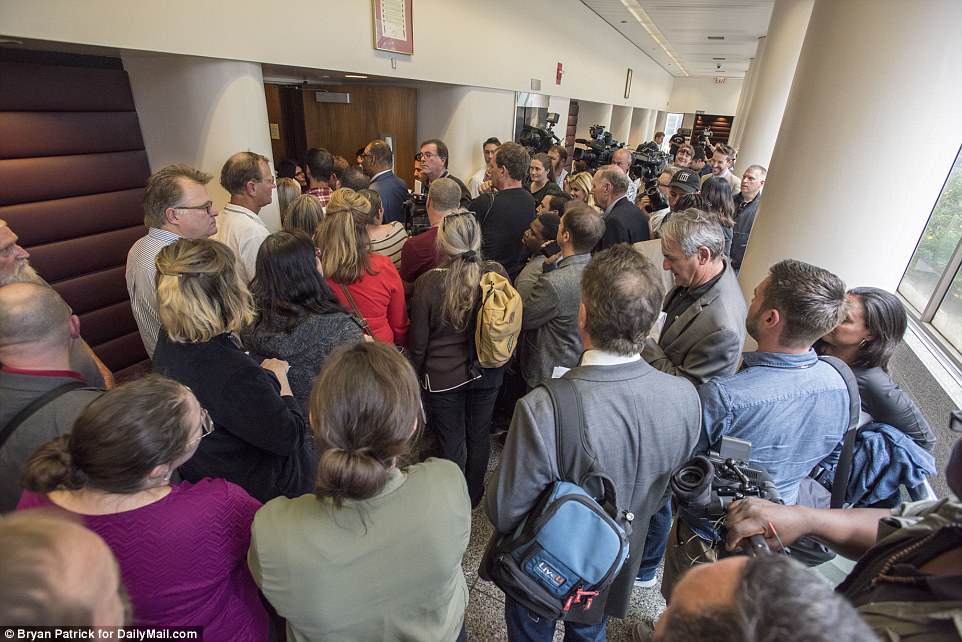 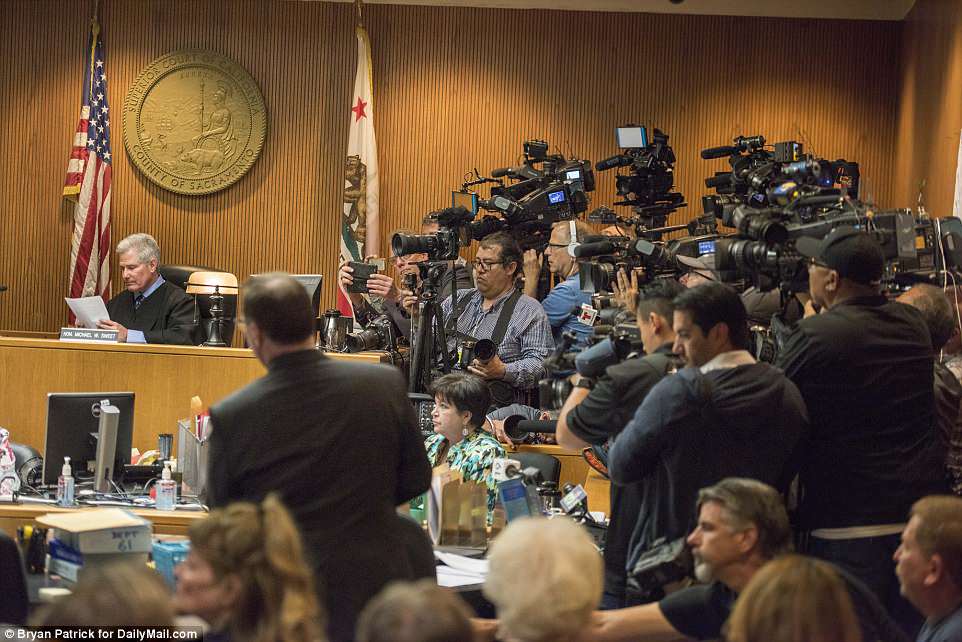 Three women who grew up in Rancho Cordova – the ‘Rancho Girls’ – were in court to witness the arraignment.

Judy Gelein, 61, said she attended high school in the 1970s with one of DeAngelo’s alleged rape victims.

‘He’s always been a Bogeyman and today I see the Bogeyman is real,’ Gelein told East Bay Times.

‘Me and my husband slept with our windows open for the first time in 42 years Tuesday night,’ she said.

‘He is the ultimate Bogeyman.’

DeAngelo was arrested Tuesday after investigators matched crime-scene DNA with genetic material stored by a distant relative on an ancestry site.

From there, they used that relative’s family tree to narrow down the list of possible suspects.

DeAngelo initially faces murder charges in the slaying of a couple from Rancho Cordova in 1978.

Brian Maggiore and his wife Katie are believed to be the Golden State Killer’s first murder victims.

The newlywed couple was shot dead while walking their dog in Rancho Cordova, California on February 2, 1978.

Katie Maggiore’s brother, Keith Smith, was sitting in the front row and observing the arraignment, according to CBS 13.

DeAngelo is expected to face a total of 12 homicide charges, according to the Sacramento Bee.

He is likely to be charged with murdering Lyman and Charlene Smith at their Ventura County home on March 13, 1980.

They were bludgeoned to death with a fireplace log and were later found by their 12-year-old son.

Smith was an attorney who was just days from being appointed a judge. His wife worked as a court clerk.

Police believe DeAngelo is also behind the murder of Dr Robert Offerman and Alexandria Manning who were killed on December 30, 1979.

Offerman, 44, and Manning, 35, were killed at a home in Goleta near Santa Barbara. They had their hands bound with twine when their bodies were discovered.

Married couple Patrice and Keith Harrington were killed in their home at Dana Point on August 19, 1980.

Police said they were beaten with a blunt instrument.

Patrice was a pediatric nurse and her husband was a medical student at UC Irvine.

Manuela Witthuhn, 28, was raped and beaten to death in her home in Irvine on February 5, 1981. 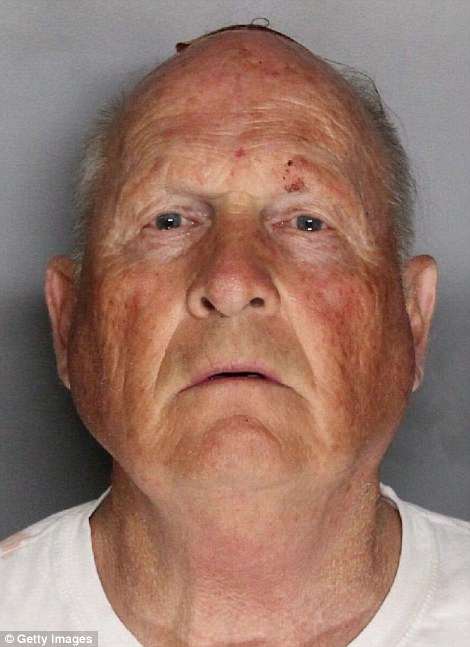 DeAngelo (left), the man suspected of being the Golden State Killer (sketch, right), was arrested on Tuesday, after investigators used a DNA ancestry website to identify him

She was home alone at the time because her husband was in the hospital recovering from an illness.

Cheri Domingo, 35, and her 27-year-old boyfriend Gregory Sanchez were murdered in their beds at a home in Goleta on July 27, 1981.

Domingo was found with her hands tied and suffering massive head injuries. Sanchez was shot and bludgeoned.

The final victim believed to have been killed by DeAngelo was 18-year-old Janelle Lisa Cruz. She was bludgeoned to death in her family’s home in Irvine on May 4, 1986.

A real estate agent who was selling the family’s home was the first to discover the teen’s body. Blood was found spattered throughout the home and police believe she was beaten with a pipe wrench.

DeAngelo is also suspected of raping as many as 51 women from Sacramento, the Bay Area, and Orange County in the 1970s and 80s.

The courtroom on Friday was packed as prosecutors declared an end to the decades-long case that terrorized California.

At around 1:45pm local time, DeAngelo was wheeled into the courtroom wearing orange prison garb.

He looked frail and appeared to be laboring to keep his eyes open.

When the judge asked him if he was DeAngelo, he whispered: ‘Yes.’

After the charges against him were read, DeAngelo did not enter a plea. 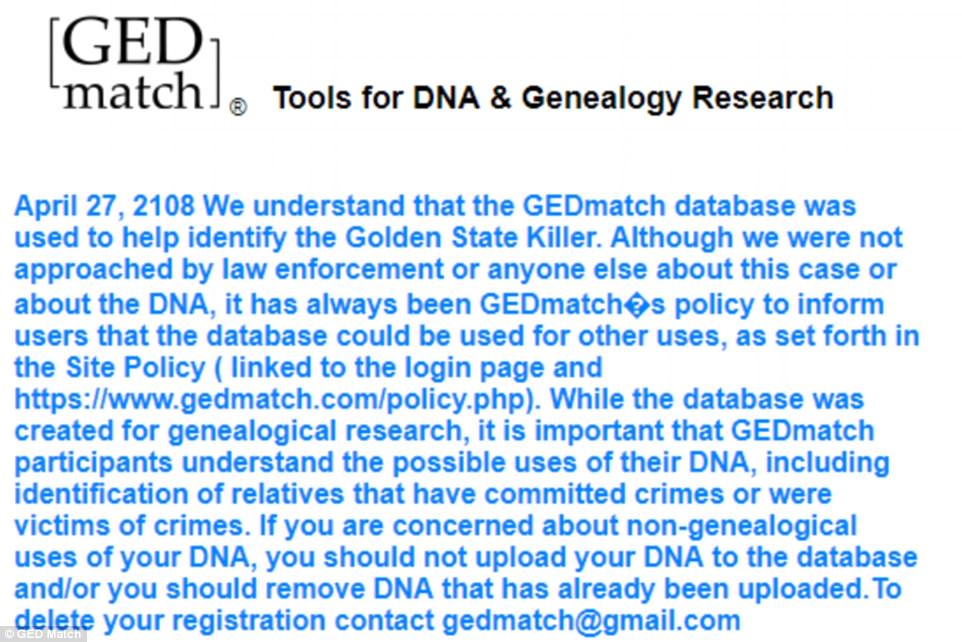 Paul Holes, the lead investigator on the case, said the team used GEDmatch, a Florida-based website that pools DNA profiles that people upload and share publicly. The site released this statement on Friday

The entire arraignment took a few minutes. The judge appointed a public defender to represent DeAngelo and scheduled another hearing for May 14.

DeAngelo became a focus of the investigation since he lived in the areas where the crimes happened and was the right age.

After he was identified as a possible suspect, cops conducted surveillance on DeAngelo and obtained a discarded DNA sample which they compared to the old crime scene samples.

The got the first results back on Friday, which showed ‘overwhelming evidence’ he was the serial rapist and murderer who terrorized the state in the 1970s and 80s.

To be sure, they conducted a second test, and the results came back positive again on Monday.

DeAngelo was arrested the following morning at his home in the Sacramento suburb of Citrus Heights.