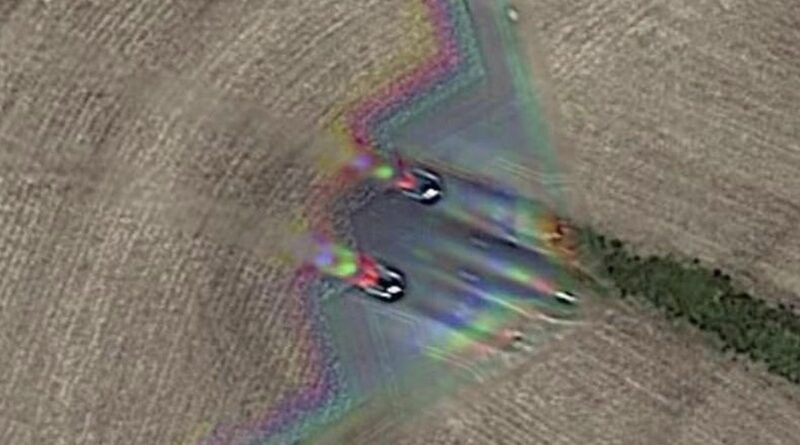 A user of Google Maps was left surprised when they spotted what appeared to be a stealth bomber in flight while browsing the app's satellite feature.

The distinctive outline of the aircraft can be seen flying over fields, with a slightly blurred outline possibly due to the speed of its travel.

Longitude and latitude references posted to Reddit thread r/googlemapsshenanigans indicate that the strategic bomber was spotted on Google Maps north west of Concordia, a town part of the Kansas City metropolitan area in Missouri.

Reddit user /Hippowned posted the image, which prompted n amused reaction from commenters on the platform.

One user remarked: "You mean a not-so-stealth bomber". Another posted: "Not so stealthy now, are ya??"

Another user posted an image to the thread which showed a B-2 Spirit bomber on the runway at Whiteman Airforce Base, which is about 20 miles south of Concordia.

The £586 million plane is pictured just off the runway surrounded by what appear to be support vehicles.

Eagle-eyed viewers might also spot what appear to be skid marks on the runway which lead to the plane's location just off the runway, which could indicate a bumpy landing.

The strategic bomber was not the only plane present on the base on that day, with two A-10 Thunderbolt ground attack aircraft also parked near to the buildings.

What appears to be nineteen large missiles can also be seen on the base.

The B-2 Spirit stealth bomber entered service in 1997, and was designed specifically to absorb and deflect radar signals to avoid detection by enemies.

Everything from the material to its distinctive shape is designed to give it as low a profile as possible.

It was originally designed to be a strategic nuclear bomber, but has seen service dropping conventional ordnance, serving in Kosovo, Iraq, Afghanistan, and Libya.