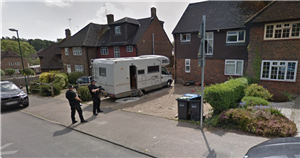 A Google Maps street view user shared a picture of the moment armed police raided a camper van on the streets of London.

Ben Oliver, a writer, came across the bizarre moment while surfing Rightmove listings for a house in the Hayward Heath area of the capital.

Rightmove’s Street View function, which allows would-be home owners to view a property using Google Maps, took Ben straight to the front door of the home, but he was in for a surprise.

Writing on Twitter, Ben said: "Someone’s selling a house in Haywards Heath and when you click on the Street View link on their Rightmove listing this is what you see."

Alongside the tweet, Ben also posted two pictures of the home, which showed a lot more than just the property.

In the first picture, a caravan can be seen parked outside of a house with two men standing near the property.

On closer inspection, it is clear the men are actually police officers, likely from London's Metropolitan Police force.

A police car can also be seen to the left of the house, and the front door of the caravan has been swung open.

Further up the road, one other police car, an ambulance, and a car from the dog unit can be seen on the same street.

The third officer is outside of the car standing near five men, all of whom have their faces blurred due to Google Maps' privacy policy.

A young girl in pink pyjamas is also near the car, but she is sitting on the floor instead.

One person even snapped a picture of the same road, which later appeared to have a hearse driving past the house.

Another user shared an image of a car crash, while a third posted a picture of what they call "the world’s tallest chimney."