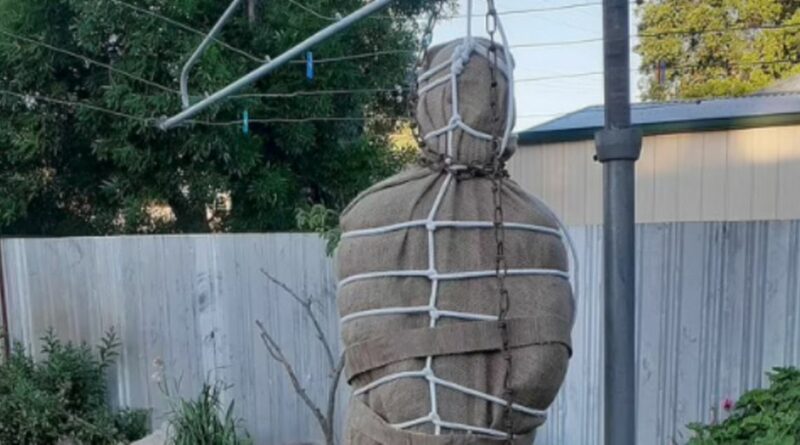 A Halloween-mad mum found police on her doorstep after her extreme decoration was reported.

Renee Ryan made a very realistic bagged up corpse and left it hanging by rope and chain from a tree on her front garden.

The terrifying design reportedly proved to be so upsetting for some of Renee's neighbours in Forbes, Australia, that she has now taken it down.

An unexpected visit from the police was clearly testament to the mum's talented arts and crafts skills as they arrived within hours of Renee sharing snaps of the bodybag online.

She explained that it took three hours to make using foam, carpet, sticky tape, rope and garbage bags before tying it up ahead of October 31.

Renee said: "The cops just came to my house and told me people had rang them and said there was a body hanging from a tree."

After explaining to Forbes Police that it was fake, they returned following a second complaint that it had triggered a someone who had "experienced loss".

Out of respect for her grieving neighbour, Renee made the decision to finally remove it despite her son loving the creation, Mail Online reports.

She kindly addressed the complainant over Facebook: "To the person that called the cops again. I know who you are and I appreciate you and I am so sorry for your loss.

"Removing the decoration isn't going to remove the pain that your heart is experiencing."

What started as a fun celebration of all things dark and spooky ended in Renee reflecting on her own grief.

She admitted the hanging fake body caused "a strong reaction in many people which says there are still many people hurting from the loss of loved ones".

Renee added: "When I lost a dear friend at 17 this way I had so many questions.

"No-one can tell you how long you are to grieve for. Least of all me.

"My hope is that you seek the support that you and others need during this, so that in time you are able to carry on with an open heart full of love."