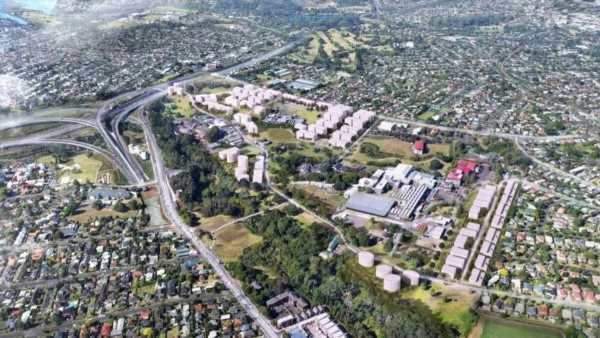 More than three years after the Government launched a huge development for up to 4000 homes on Unitec land to tackle Auckland’s housing crisis head-on, not a single house has been built.

In March 2018, Prime Minister Jacinda Ardern unveiled the development at Unitec’s Te Noho Kotahitanga Marae in her Mt Albert electorate, saying the mix of affordable and open-market housing would include parks, shops and a new school.

The development was the first major plan released under the now-abandoned KiwiBuild programme, with plans for between 3000 and 4000 homes on 26.5ha of land the Government purchased from Unitec.

The idea is to create a new community on the scale of Hobsonville Point, where 4500 homes are past the halfway mark at the former Air Force base in West Auckland.

At the time, Ardern expected work on the Unitec site would begin in 2019, saying housing within the Mt Albert community was “dear to my heart”.

Said then housing minister Phil Twyford: “The Government will not sit around while children are living in cars and families are cramped into overcrowded houses.”

Woods praised the Kōkihi build for being delivered ahead of schedule and called it an example of how to do great development.

The Housing Minister told the Herald work clearing the Unitec site and early earthworks for stormwater and wastewater is under way this winter using $75 million of Covid-19 “shovel-ready” funding.

Come spring and summer, she said, the main “backbone works” of roading upgrades, power and telecommunications and further water and wastewater works are due to start.

“Residential housing will then follow the infrastructure, with development due to start in the south as the backbone networks are built, in summer/autumn 2022,” said Wood.

In June last year, the Unitec development was one of 11 infrastructure projects put on a fast-track planning process by Environment Minister David Parker to help rebuild the economy after the Covid-19 pandemic.

At the same time, a concept plan for the Unitec site was released with images showing tree-lined streets of two-storey homes and apartments rising to 12 storeys at the Northwestern Motorway end about 9km from the central city. The “urban village” also included the restoration of heritage buildings.

The development is a partnership between the Government and the iwi of the Ngā Mana Whenua o Tāmaki Makaurau collective.

After 13 months, the Ministry of Housing and Urban Development (HUD) has not lodged a resource consent for the main works under the fast-track process.

A HUD spokesman said because the project was listed in the Fast-track Consenting Act, Auckland Council had recognised it as a priority development for the Government, meaning it does not have to call on the fast-track process to gain consent.

“The major backbone infrastructure works are expected to begin this summer, which will then allow housing construction to start, with the first tranche of up to 50 homes scheduled to be ready for occupation in late 2022,” the spokesman said.

In a statement, the Mt Albert Residents Association welcomed improved housing opportunities for Aucklanders and understood the Unitec site is a great opportunity to deliver those outcomes.

“The 4000 dwellings will mean a big change for Mt Albert but we are heartened by the Prime Minister’s promise to deliver a ‘gold standard’ developent.”

The key concern for locals is to ensure adequate transport infrastructure is integrated into the masterplan to avoid excerbating current traffic problems, the association said.

The National Party’s housing spokeswoman, Nicola Willis, said it was disappointing to see the Unitec project stall when the country is in desperate need of housing.

“Unitec is another in a long list of projects that Labour announced during the campaign as ‘shovel-ready’ and would be fast-tracked, but currently New Zealanders have nothing to show for it,” she said.

Willis said with median house prices and rents ballooning, Labour lacked the urgency to address the housing crisis and get houses built.

Since Labour announced the plans for Unitec in 2018, the median house price in Auckland has risen by 31 per cent, from $880,000 to $1.148 million in May this year, according to Real Estate Institute figures.

Back in 2018, National Party leader and then housing spokeswoman Judith Collins questioned why the Unitec project was beside the Mason Clinic, the country’s most secure mental health facility.

She said the clinic’s location should be discussed widely, but acknowledged the previous National Government had signed off Unitec’s plans for about 2600 homes.

The slow progress at Unitec comes as the Government directs Auckland and other growth cities to increase intensification in metropolitan centres and along transport corridors to address housing shortages and runaway house prices.

In Auckland’s case, the directive is likely to see kauri villas and bungalows demolished in heritage suburbs for apartment blocks of at least six storeys.