Home » World News » Grandmother, 95, dies after being knocked over by puddle

Killed by a puddle: Grandmother, 95, dies of brain haemorrhage after being knocked over by wall of water thrown up by cars driving on a wet road 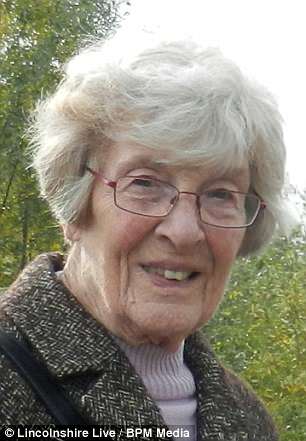 Hilda Moore, 95, was knocked over and hit her head on the ground after she was hit in the face by water, Sleaford, Lincolnshire, on Friday, April 27

An elderly woman has passed away after she was knocked up by water splashed up from cars driving through puddles.

Hilda Moore, 95, was shopping when a water from a puddle is believed to have hit her and knocked her over, causing her to hit her head on the ground in Sleaford, Lincolnshire.

She was rushed to Lincoln County Hospital after the incident on Friday and was found to have a large brain haemorrhage.

Medics told the family that Ms Moore was unlikely to pull through but Lincolnshire Police today confirmed the elderly woman has now passed away.

Peter Wheeldon, Ms Moore’s son-in-law, said the vehicles had created a bow wave which pushed a large amount of water to the side.

A vehicle then hit the puddle, sending a wave crashing onto the pavement where Ms Moore, who was walking with a stick, was standing.

She was knocked onto the floor but the vehicles did not stop to help her.

Lincolnshire Police have now renewed their calls for witnesses to come forward.

A force spokesperson said: ‘Earlier this week we issued an appeal for witnesses and information after a 95-year-old woman was injured in Sleaford on Friday, April 27.

‘We are sad to report that the lady involved has now died.

‘Officers are investigating the cause of her death and a number of lines of enquiry are being explored to try and establish the exact nature of the circumstances involved.

‘It was reported that the lady was injured as she was walking along the path near to the junction with Bonner Close and Mareham Lane in Sleaford around 4.30pm on Friday [April 27]. 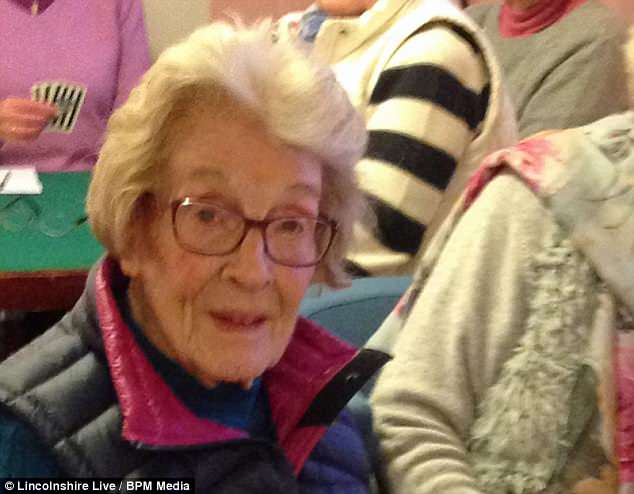 Mrs Moore often played golf until she was 92, and also played bridge at Sleaford golf club and visited the twin towns of Sleaford in both France and Germany

‘It was reported that she fell to the ground but it is not yet clear what caused her to fall and sustain her injuries. She was taken to hospital for treatment for a head injury.

‘Investigating officers would like to hear from anyone who was in the area around 4pm and may have seen an elderly lady walking along Mareham Lane.

‘Or if you have any information that may assist the enquiry and have not yet spoke to police, please contact us.’

Mr Wheeldon said on Monday: ‘She was rescued by two men in a van going in the opposite direction.

‘They rushed to help her. People still drove through the puddles and they had to put umbrellas up to stop her getting wet. They called for an ambulance.

‘She was on the pavement and would have been visible to drivers. ‘My wife and I had driven through about half an hour before. It was clear that the road was flooded and you would be able to see someone.

‘None of the cars that drove through the puddle stopped.’

Mr Wheeldon was also highly critical of those who drove through the puddles as speed and did not stop to help his mother-in-law.

‘We want to raise the issue that you can’t keep driving through puddles. It was not just the first two or three vehicles, as more continued to come through.

‘You shouldn’t go through a puddle at 30 miles per hour. It’s quite probable they [the drivers] don’t know they have done it.’

Anyone with information can contact police by calling 101 and quoting inicdent number 352 of April 27.