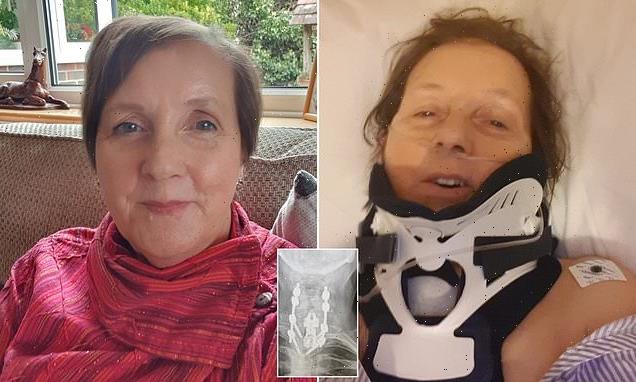 Grandmother, 64, who was in hospital with broken neck falls over and breaks her BACK in ward on day she was due to be discharged

A grandmother recovering in hospital with a broken neck slipped on the day she was due to be discharged and broke her back.

Lindy Moors, from Steyning, West Sussex, was rushed to hospital after breaking her neck when a sliding barn door at her farm crashed down on her head in January.

The 64-year-old, who runs the small farm yard with husband Arthur, 64, needed two major surgeries on her neck to prevent her being paralysed.

But just a week later the grandmother-of-five, who was due to be discharged later that day, suddenly grew faint and collapsed on her way to the hospital toilet.

Lindy was x-rayed and doctors revealed she broke her back as she fell – before she was rushed for her third major surgery in a week.

But despite sustaining two life-threatening injuries just days apart, with doctors warning each time she may become completely paralysed, Lindy is still able to walk and talk and is on the road to make a full recovery. 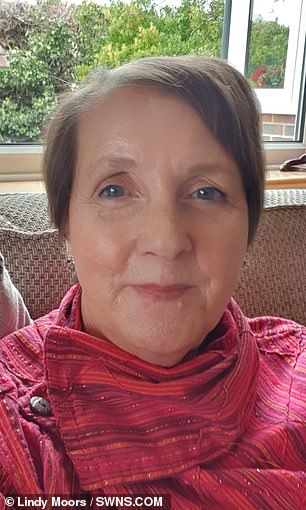 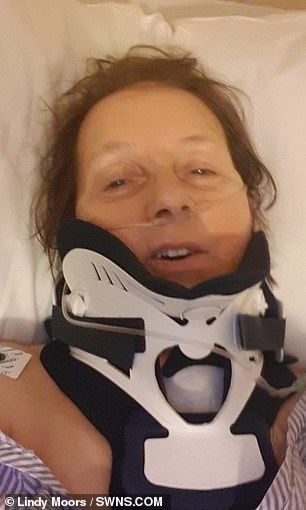 Lindy Moors, from Steyning, West Sussex, was rushed to hospital after breaking her neck when a sliding barn door at her farm crashed down on her head in January

Lindy has since said she felt ‘lucky to be alive’ – and the two huge scars running up and down her back serve as a reminder of her horror experience.

The brave grandmother said: ‘The whole experience was absolutely terrifying – you hear of broken necks and backs and think the worst.

‘I never expected I’d make it home alive and I was sure I’d never be able to hug my family again – but three months down the line my physiotherapist said he can’t believe how far I’ve come.

‘I’m still in a lot of pain but I think of it as a positive – as long as I feel pain, I’m know I’m not paralysed or dead!

‘I have no idea how or why I’m still alive but I feel so lucky to be here – with the support of my amazing family and the staff at the hospital.

‘But this experience has shown me I’m stronger than I thought I ever could be.

‘Even after a serious accident, there’s always hope.’ 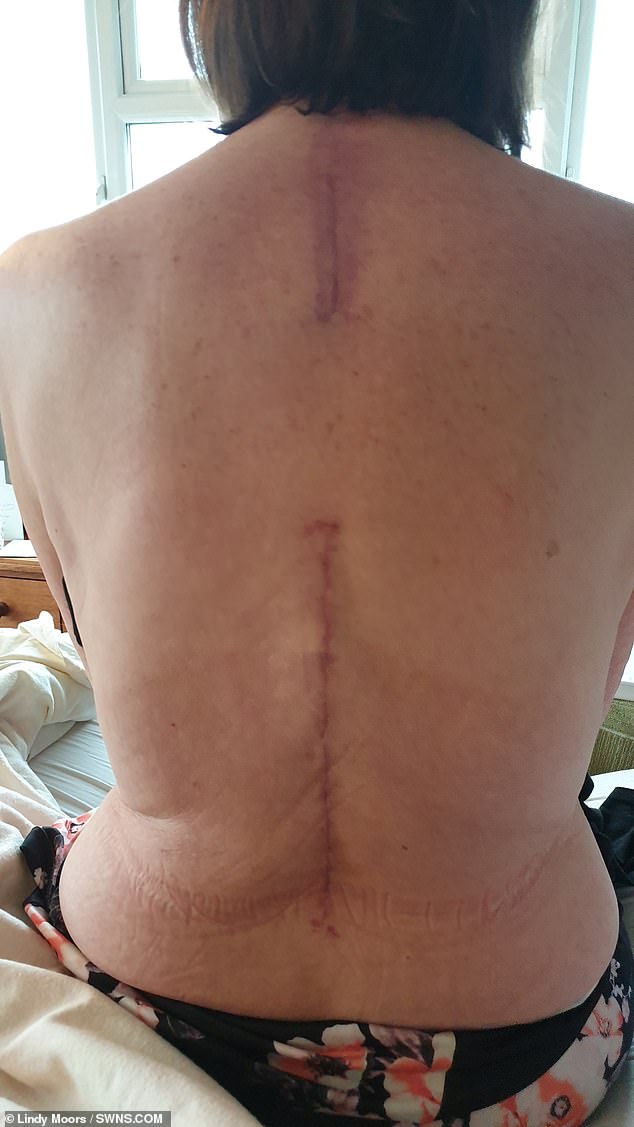 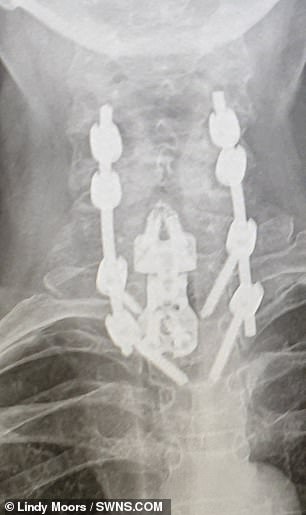 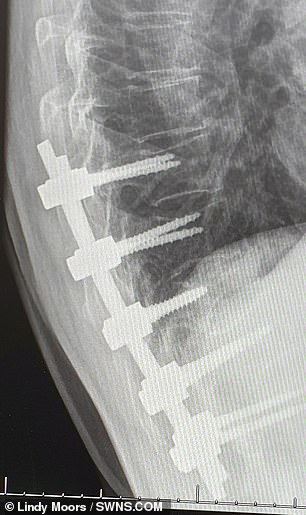 Lindy’s ‘week from hell’ began when a barn door came free from its runners and crashed down on top of her on January 24 this year at her small Steyning farm.

The 60kg door dropped and briefly knocked her unconscious before she crawled out from beneath it, feeling a ‘terrible pain’ in her neck.

But she was still fully able to move, so she said she ‘never considered the possibility it was broken’ – before an x-ray at A&E revealed one of her vertebrae was fractured and also compressed.

She said: ‘I just remember being in total shock and completely terrified when I found out.

‘I was sat alone in the hospital – I couldn’t even see my husband because of coronavirus – and I had no idea what was going to happen to me.’

The grandmother was booked in for two surgeries over the following days at Royal Sussex County Hospital in Brighton, to insert metal plates and bone grafts around the fracture. 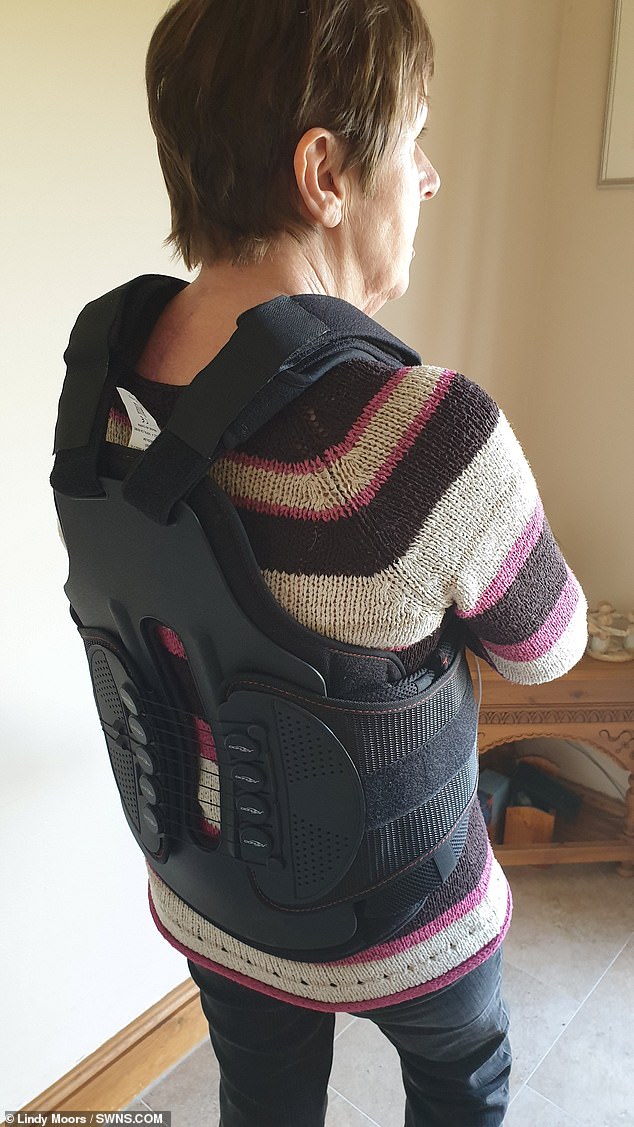 Lindy has slowly built up some strength and is now able to walk for up to 25 minutes a day, and has began to cook and clean again

Lindy, mother to Sara, 42, and Kaye, 38, recalled being warned of the risks and dangers of her injuries – which included paralysis and death.

The successful surgeries on her neck took place on January 26 and 28 and doctors told her that her recovery was going well, and she could be discharged to recover at home on February 2.

Lindy was excited to be reunited with husband Arthur, until just 12 hours before her discharge – when she suddenly collapsed on the way to the toilet.

‘Everything went fuzzy, and I felt like I couldn’t breathe,’ she recalled. ‘I tried to pull the cord for the nurse, but my knees must have just buckled.’

‘The next thing I remember, my back was in agony and I was lying sprawled out on the bathroom floor.’

Barely able to move, Lindy was rushed for another x-ray – and to her horror, she learned she had fractured yet another vertebrae – this time one in her lower back.

On February 3, she had her third major surgery in just eight days, where she had yet more screws and bolts fitted, as well as another titanium cage and bone graft.

She said: ‘I remember waking up from the third surgery and beginning to wonder how on earth I was still alive.’

Despite a slow recovery process where she could barely move, and two enormous scars stretching almost the whole length of her spine, Lindy eventually became strong enough to stand up wearing a body brace to secure her neck and back.

She was able to return home to husband Arthur and their dog, Peggy, on February 12, and she said he became her ‘chef, nurse and personal shopper’ as she was first limited to standing and walking for just a handful of minutes a day.

Since then, Lindy has slowly built up some strength and is now able to walk for up to 25 minutes a day, and has began to cook and clean again.

‘I’ve been told to take it easy but I’m pushing myself to do more and more every day,’ she said.

‘My physiotherapist can’t believe how much stronger I’ve grown in the last three months.’

As she continues to recover, she says she can’t wait to tend the farm animals and go for long hikes with Arthur and their dog again.

Lindy said: ‘I still can’t quite believe what I’ve been through.

‘There was a time when I never thought I’d make it home or hug my family again – I’m still not sure how or why I’m even alive, and not paralysed.

‘I consider myself incredibly lucky, and whenever I feel pain I see it as a positive – as long as I feel pain, I’m know I’m not paralysed or dead!

‘I have had amazing support from my family and I couldn’t be more grateful for the treatment and care I received at Brighton hospital.

‘In particular, my surgeon was absolutely wonderful – his care, knowledge and expertise are the reason I’m doing so well today.

‘Looking back on the past few months, this experience has shown me I’m stronger than I thought I ever could be.

‘I want people to know that even after a serious accident, there’s always hope.’