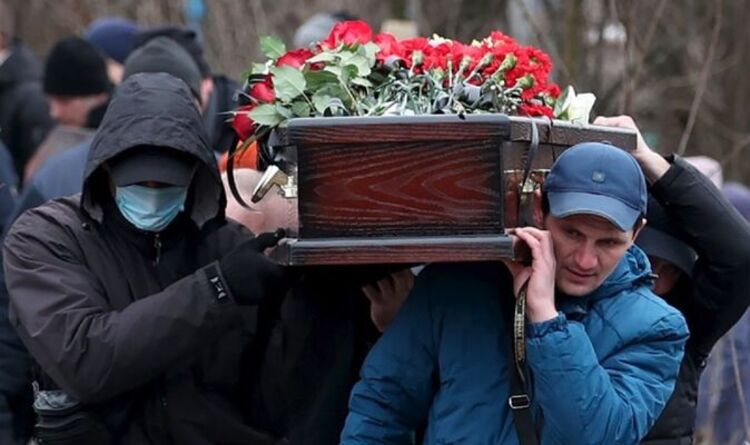 According to the interior ministry of Ukraine, at least 352 Ukrainian civilians have been killed so far as Vladimir Putin began his invasion of the former Soviet country. These victims include 14 children. Around 1,684 people – including 116 children – have been wounded.

On Sunday, Russian Defense Ministry spokesman Maj Gen Igor Konashenkov said: “There are dead and wounded among our comrades.”

He added that Russia’s losses were “many times” fewer than those of Ukrainian forces.

Ukraine has claimed that its forces have killed 3,500 Russian troops.

Now, grieve-stricken Ukrainians have been pictured burying their dead.

People were photographed at the Kalininsky District Cemetery during the funeral of teachers of Secondary School No.50, geography teacher Yelena Kudrin and deputy headmaster Yelena Ivanova.

These were both killed in a February 25 shelling attack on Gorlovka.

Sick children have also been forced to hide in a basement as Russian airstrikes continued over the weekend.

One child struggling with cancer holds a sign that says “Stop War” in the bomb shelter of an oncology center in Kyiv on February 28, 2022.

Children including diagnosed with cancer receiving treatment were moved to the basement floor or the shelter of Okhmatdyt Children’s Hospital.

In another humiliating move for Putin, the head of the Moscow delegation Oleg Anisimov apologised to Ukraine at a meeting for the approval of the Intergovernmental Panel on Climate Change’s (IPCC) latest climate report.

Appearing at a virtual meeting of the IPCC, he said in Russian: “First of all, let me thank Ukraine and present an apology on behalf of all Russians who were not able to prevent this conflict.

“All of those who know what is happening fail to find any justification for this attack against Ukraine.”

He added: “Since we are dealing with scientific issues, we have huge admiration for the Ukrainian delegation that was able to still do its work.”

The Ukrainian delegation was forced to abandon the meeting on Thursday after Russian troops invaded the country.

The apology comes as a senior US official said on Sunday Russia could be shifting its strategy to siege warfare just as President Putin raises the risk of a catastrophic miscalculation by putting nuclear forces on heightened alert.

As missiles rained down on Ukrainian cities, hundreds of thousands of civilians were fleeing the Russian assault into neighbouring countries.

Russia has fired more than 350 missiles at Ukrainian targets so far, some hitting civilian infrastructure, the senior US defence official said, speaking on condition of anonymity.

Citing a Russian offensive on the Ukrainian city of Chernihiv, north of Kyiv, the official cited early indications Russia might be adopting siege tactics.

They said: “It appears that they are adopting a siege mentality, which any student of military tactics and strategy will tell you, when you adopt siege tactics, it increases the likelihood of collateral damage.”