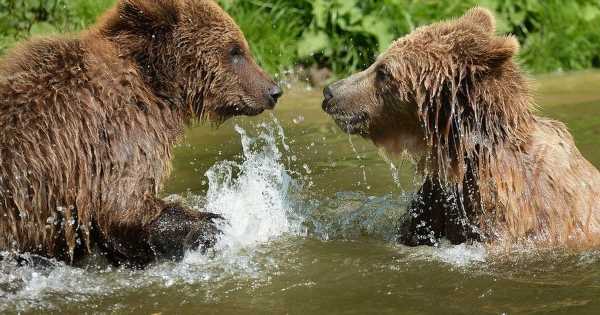 A group of 16 guests enjoying a luxury £300 stay at a zoo were trapped inside when two bears escaped from their enclosure.

The female brown bears were shot dead at Whipsnade Zoo, near Dunstable, Beds., after using a fallen tree to get out.

They clambered into a neighbouring enclosure where they attacked a male wild boar on Friday morning (May 21).

The bears, called Snow White and Sleeping Beauty, used the tree as a “bridge” after it blew over during strong winds.

Officials claimed they did not have time to tranquillise them as they could have become “unpredictable and aggressive”, and the boar enclosure had a low fence.

According to the Sun, the attraction was not open to members of the public at the time the incident unfolded.

However, they were reportedly kept indoors and were far back as the animals were shot.

“We can therefore safely assume that the brown bears breached their enclosure sometime between 7.30am and 7.50am when the alarm was raised.

“The incident was contained by 8:10am.

"We had 16 guests onsite for our overnight experience, but they were on the other side of the zoo and kept indoors throughout."

Chief curator Malcolm Fitzpatrick emailed staff to say: "As brown bears are strong and dangerous predators, our first priority is safety – we must quickly make decisions informed by our experience and expertise to protect our people, guests and our other animals.

No one wants to be the one to make that call, but when there's an immediate threat to human life, the decision is made for you.”

He said tranquilising the bears was not an option, as it can take 20 minutes to work.

The animals can become "unpredictable and aggressive as adrenaline is coursing through them”, he added.

"We had to intervene immediately to ensure the bears didn't get out of the boar enclosure, which has a low fence.

"This situation is something we train to deal with through regular, rigorous drills – but one that we always hope we'll never have to face.”

The Zoological Society of London (ZSL), which runs the site, said a full investigation will be carried out to prevent any similar incidents in the future.