Prague: Police and officials say at least four people have been killed in a shooting in a hospital in the eastern Czech Republic. Two others are seriously wounded.

Officials say the shooter is at large. They published a photo of the suspect, a man in a red casual jacket. 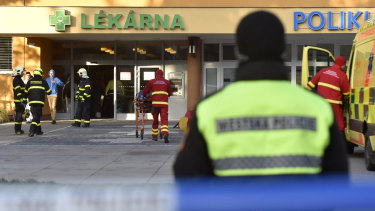 The incident occurred at a teaching hospital in Ostrava. Credit:CTK

The shooting happened around 7am Tuesday morning in the University hospital in the city of Ostrava, located 350 kilometres east of Prague.

Officials say people have been evacuated from the clinic. Police are boosting security across the country.