Pictured: Ex-Olympic boxing hopeful and mayor’s son-in-law, 22, who was shot three times as he sat in car outside Sainsbury’s

Hamza Hussain, 22, is a former England Under 18 light welterweight boxing champion and had been tipped for Rio 2016

A gunman has shot a mayor’s son-in-law and former Olympic boxing hopeful as he sat in a car outside Sainsbury’s.

Hamza Hussain, 22, was shot three times as he drove with another male, aged 27, last night. The other man has also suffered gunshot wounds.

Hamza is a former England Under 18 light welterweight boxing champion and had been tipped for Rio 2016.

Today, his father-in-law Mumtaz Hussain, mayor of Kirklees Council, in West Yorkshire, said he has not spoken to his son-in-law since he fell in with the wrong crowd in his home town of Dewsbury.

This latest violence on the streets follows on from an arson attack on another Kirklees Councillor’s home, on 22 October.

Then, hooligans torched two cars belonging to the family of Masood Ahmed in what could be linked to his stance on gangs in Dewsbury.

Councillor Ahmed, 51, fled his home with his wife, four children and two grandchildren in the early hours of the morning on October 22 after four masked men petrol bombed a black Audi A1 and a blue Subaru Impreza, which were parked in the drive.

But, Mayor Hussain, who represents Labour, does not think the attack on his fellow councillor and his son in law are linked.

Police were called at 7:10pm on 4 November to reports of a shooting incident near a Sainsbury’s Local, on Huddersfield Road, in Liversedge. 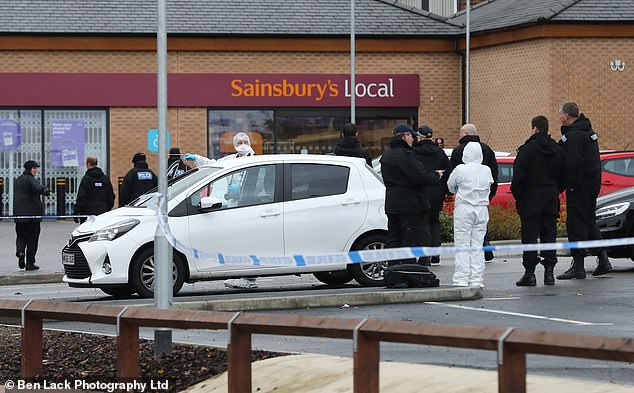 Hamza Hussain, 22, was shot three times as he drove with another male, aged 27, last night. The other man has also suffered gunshot wounds

Councillor Hussain attended the incident not knowing his son-in-law was one of the victims, who was shot as they travelled in a white Toyota Yaris.

‘My daughter rang me from Leeds General Infirmary at 11am to tell me her husband had come out of the operating theatre and surgeons had removed three bullets from him,’ said Councillor Hussain.

‘He hangs around with people who are in trouble all the time. I don’t speak to him and he is not invited to my house.

‘I don’t get on with the guy, but he’s my daughter’s husband.’

Councillor Hussain has spoken to Hamza’s father, who has asked people to pray for his son. 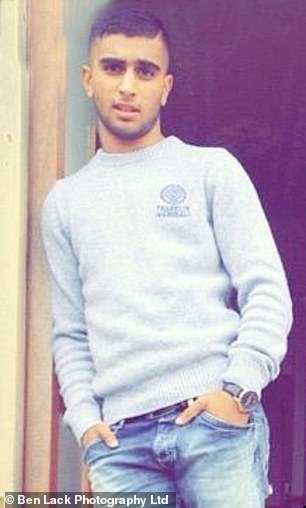 He said Hamza and his daughter have an eight month old baby girl.

‘I told him you have got a little girl so you need to stop what you are doing.

‘I think that maybe this could be a turning point. He could have been killed.’

West Yorkshire Police stated: ‘Two men aged 27 and 22 received gun-shot wounds and have been taken to hospital for treatment to serious injuries.

‘It is believed the suspects made away in a small dark coloured vehicle and enquiries are currently ongoing to trace the occupants.

The road at its junction with Lumb Lane has been closed while officers investigate the full circumstances of the incident.

Officers are also conducting high visibility patrols in the vicinity to offer reassurance and support to the local community.

Any witnesses or anyone with information as to those responsible are asked to contact the non-emergency number 101 or Crimestoppers in confidence on 0800 555 111. Alternatively, you can use the live-chat facility available via the Force website.

Likewise, if anyone has dash-cam footage or CCTV capturing this incident, please get in touch immediately.