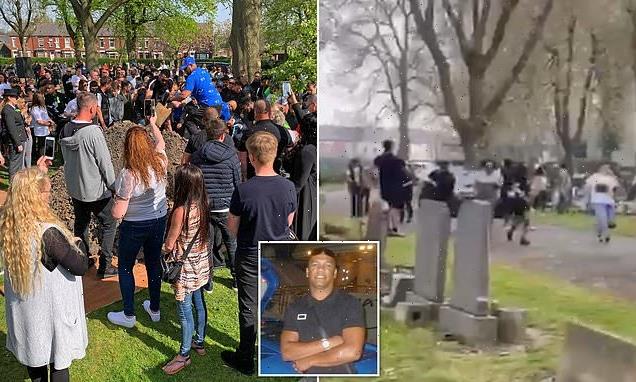 A gunman who opened fire in a cemetery at the funeral of a Manchester gangster known as Mr Ibiza during lockdown has been jailed for six years.

Mohammed Umar, 24, was sentenced at Manchester Crown Court for the possession of a firearm with intent to cause fear of violence at the funeral of criminal Clive Pinnock, 38, on April 23 last year.

As well-wishers drank beer and blared music out of speakers near to the gravesite at Gorton Cemetery in Manchester, Umar sneaked in and shot at the crowd, which included young children.

In a video taken at the scene someone can be heard shouting ‘Who’s shooting? Who’s shooting?’ as the crowd quickly disperses through the trees and armed police arrive. 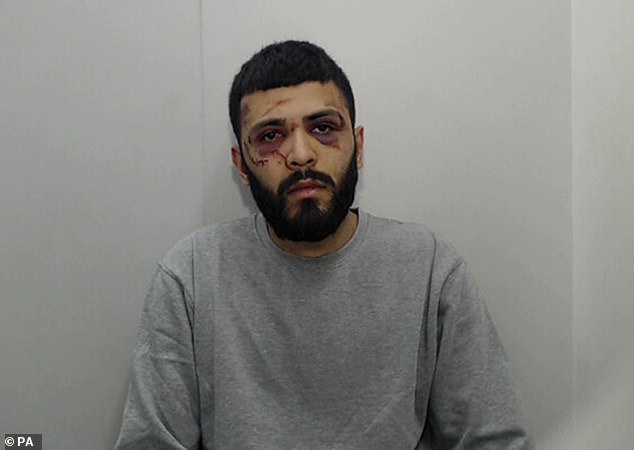 Mohammed Umar (pictured), 24, was sentenced at Manchester Crown Court for the possession of a firearm with intent to cause fear of violence at the funeral of criminal Clive Pinnock, 38, on April 23 last year 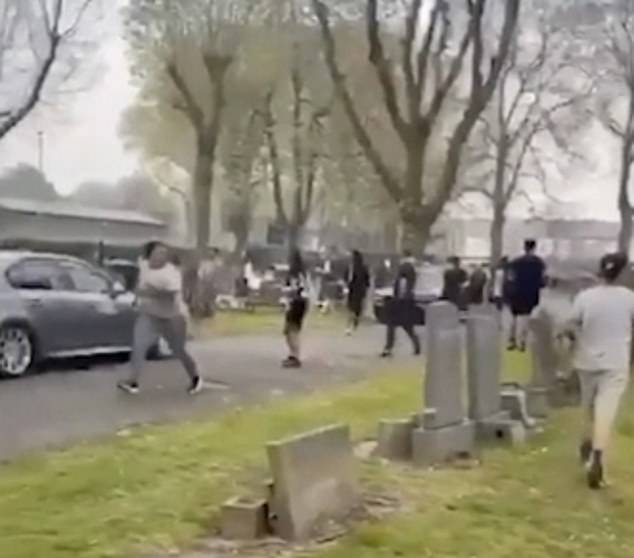 Dozens of people who broke social distancing rules to attend the service of criminal ‘Mr Ibiza’ Clive Pinnock, 38, were forced to flee when a series of gunshots were fired within the crowd at Gorton cemetery, Manchester 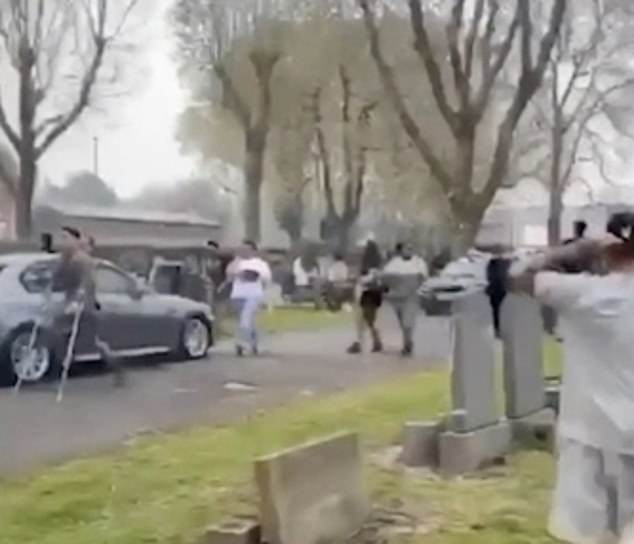 In the video, taken by a man attending with his friends, someone can be heard shouting ‘Who’s shooting? Who’s shooting?’ as the crowd quickly disperses through the trees and armed police arrive 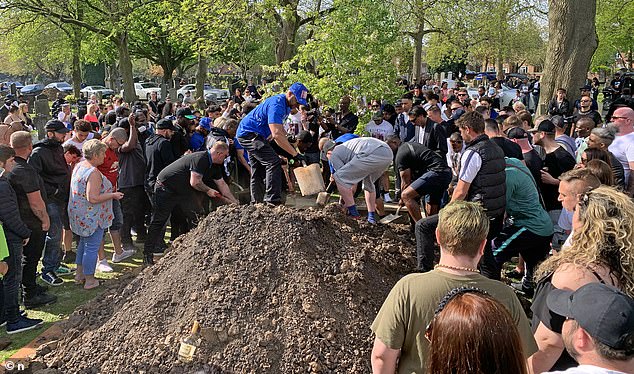 ‘It was terrifying. Everyone was playing their respects to Clive and having a drink and remembering old times while some music played,’ an onlooker told the Sun.

‘Then there was a popping sound and people started running. It took a few seconds to realise it was gunfire and then everyone started running and trying to find cover behind gravestones and in cars.’

Nobody was hit and Umar fled, but was chased by some of the group as he continued to wield the weapon.

The force spokesman said the group caught up with Umar and assaulted him before officers intervened.

His injuries included black eyes and bruises and he was arrested following hospital treatment.

Police said the gun was discovered in a park bin days later. 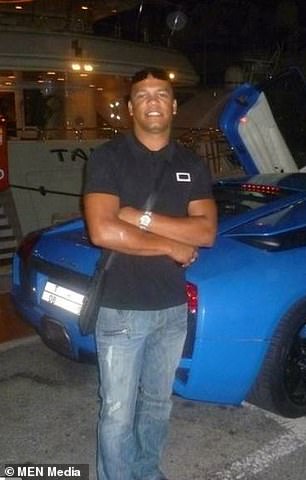 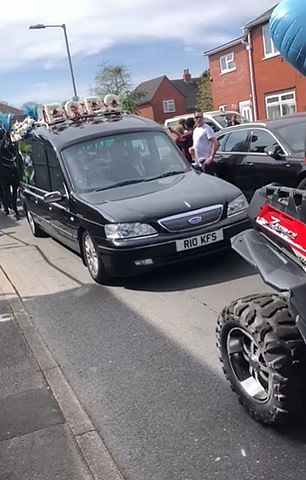 Clive Pinnock (pictured left) was killed in a collision between a BMW and his motorbike on April 8. He was known as ‘Mr Ibiza’ by friends and family. Huge crowds gathered to pay their final respects to Mr Pinnock (right, a hearse drives through town) 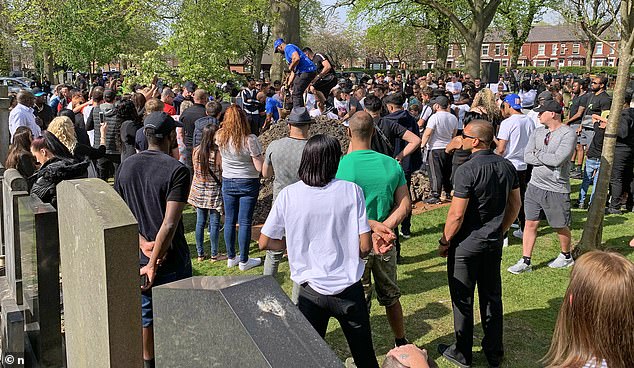 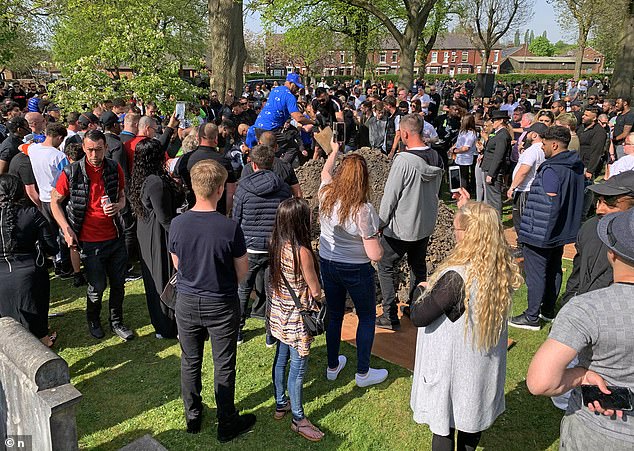 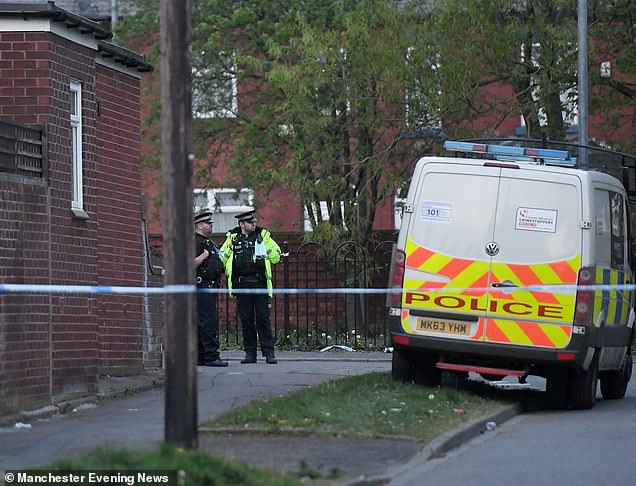 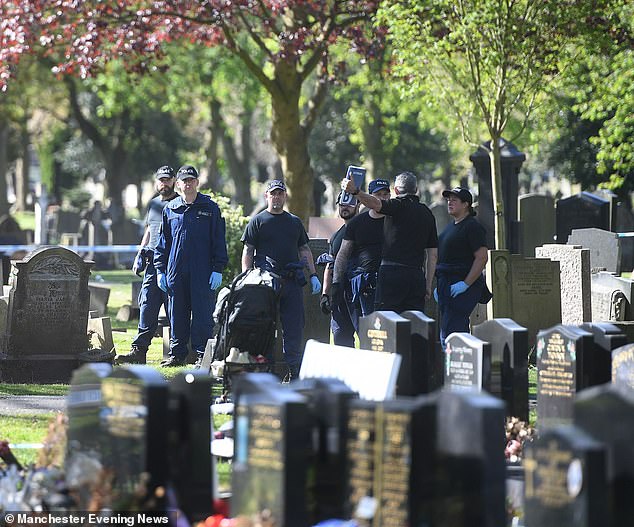 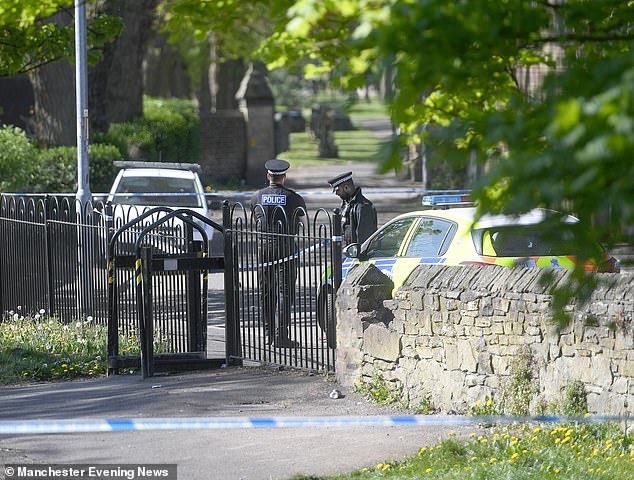 Police at the scene after the shooting at Gorton Cemetery

Detective Constable Terry Macmillan said: ‘This is a shocking act that took place in a location considered sacred to many, where people pay respects to their loved ones who have passed.

‘Thankfully, no-one in the cemetery at the time of Umar’s actions reported receiving any injuries, however Umar’s own injuries as a result of the assault proved to be relatively serious.

‘Umar opened fire in such a busy, open space, showing the disregard he has not only for the law, but the safety of the general public and innocent passers-by.’

Pinnock, from Longsight, south Manchester, was killed after the Kawasaki motorbike he was riding was involved in a collision with a BMW in Manchester on April 8, 2020.

In 2015, he was jailed for 11 years after stabbing two men following a row in a pub in the city.