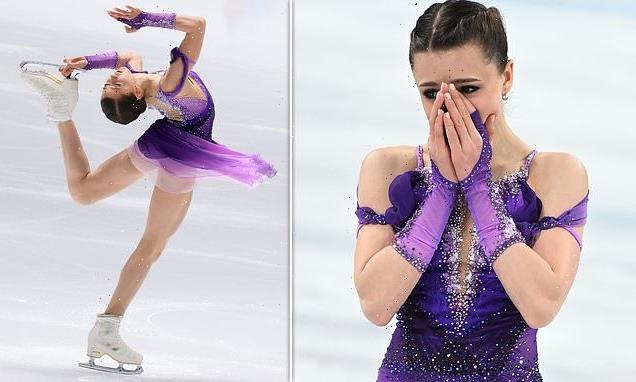 How ‘Miss Perfect’ wowed the world… then dragged the Olympics into the gutter: As 15-year-old skating sensation Kamila Valieva is allowed to compete despite failing drugs test, GUY ADAMS examines the scandal’s impact on the sporting spectacular

For Russian teenager Kamila Valieva, it took less than 30 seconds to make history at Capital Indoor Stadium in Beijing last week when she became the first female figure skater to successfully land a ‘quad’ at an Olympic Games.

Just 17 seconds later, she did it again. Propelling skywards and spinning, she once more completed four mid-air rotations before landing on one leg and whizzing gracefully across the ice to the tune of Ravel’s Bolero.

The fiendishly difficult jump is regarded as a sort of Holy Grail in the world of women’s figure skating, and Valieva’s flawless execution not only cemented Russia’s victory in the prestigious team event, but also the elfin 15-year-old’s status as a global sensation.

Nicknamed Miss Perfect, Valieva was virtually unknown outside the inner circle of her sport before debuting on the adult circuit four months ago. But she has since gained considerable celebrity — and fast.

An Instagram account, on which she has occasionally chronicled her training regime and the daily life of her pet Pomeranian dog, Leva, now boasts more than 545,000 followers. 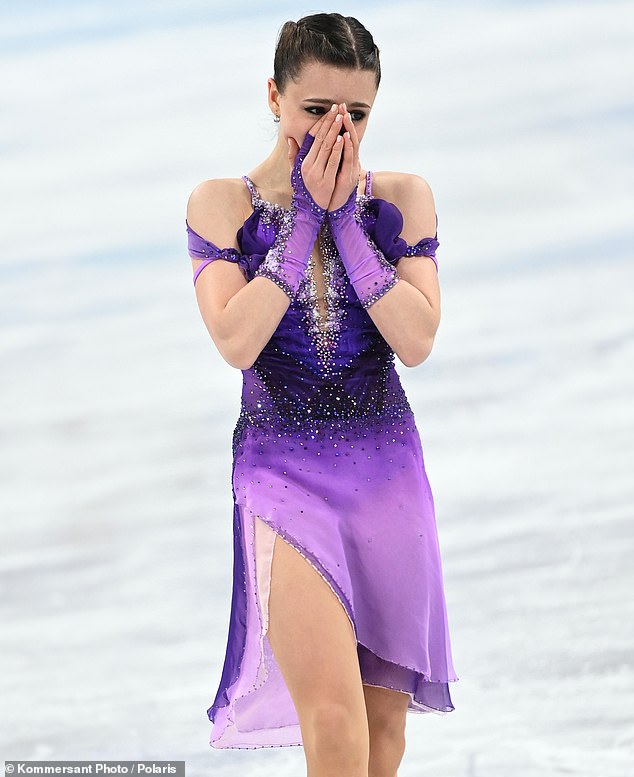 ‘Today, Kamila Valieva finds herself occupying a very different place in Olympic history, amid a spiralling controversy over just how natural that extraordinary talent actually is’

Vogue Russia has granted her a photoshoot. And last week’s gold medal performance was praised by everyone from Vladimir Putin (who waxed lyrical about her ‘skill, resilience and willpower’) to Alec Baldwin, who used social media to offer gushing thanks ‘to Kamila Valieva for your gift of heart-stopping beauty to the world.’

Having now won every single international event she’s ever entered, expert TV pundits were only days ago hymning her ‘ethereal’ presence and anointing her as the greatest natural talent that figure skating has ever seen.

Sport has a funny way of springing surprises, though. Today, Kamila Valieva finds herself occupying a very different place in Olympic history, amid a spiralling controversy over just how natural that extraordinary talent actually is, and what might have made her such a ‘perfect’ athlete.

Things started to unfold within 24 hours of her national team winning gold, when it was announced that the medal ceremony was being postponed due to what was initially described as a ‘situation . . . that requires legal consultation.’

It quickly emerged that the ‘situation’ was, in fact, a doping scandal. Namely: a urine sample Valieva had given to authorities at the Russian Figure Skating Championships on Christmas Day had tested positive for a drug called trimetazidine.

The medicine, which was developed to combat angina attacks, helps to maintain blood flow and relax blood vessels, ostensibly helping a person breathe more easily. It has been banned in sport because those qualities also aid endurance, allowing athletes to train for longer.

In a discipline such as figure skating, where mastering complex skills such as these dazzling ‘quad’ jumps requires strength and athleticism, that for quite obvious reasons makes the drug performance-enhancing. 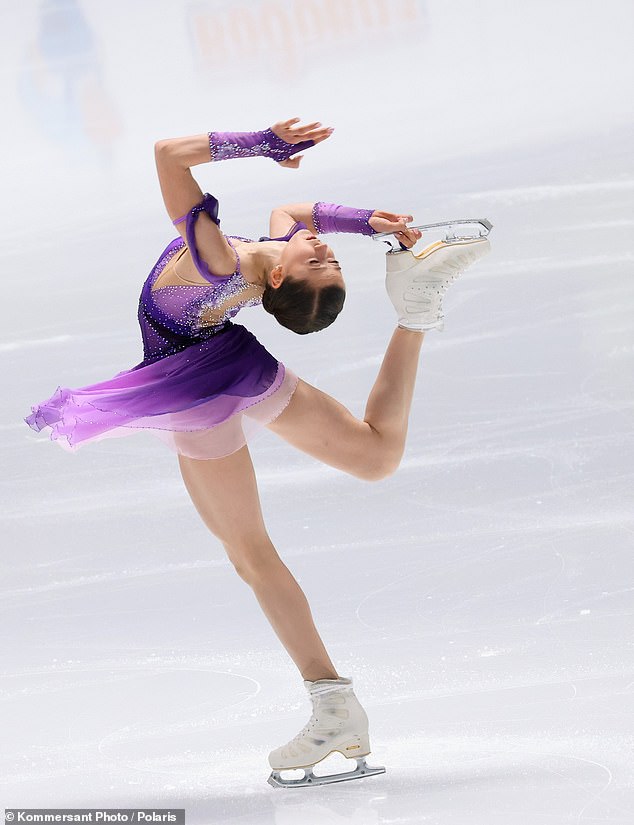 ‘Nicknamed Miss Perfect, Valieva was virtually unknown outside the inner circle of her sport before debuting on the adult circuit four months ago’

All of which should mean two things. First, the gold medal that Valieva’s team won last week ought to be rescinded. And second, like all athletes who fail a doping test, she should have been instantly suspended from competition, with further consequences for any coaches found to have assisted her.

In fact, such a series of events played out at the 2018 winter games, when another Russian woman, bobsledder Nadezhda Sergeeva — who had, ironically, been parading around Pyeongchang wearing a sweatshirt that read ‘I Don’t Do Doping’ — also tested positive for trimetazidine.

The incident saw Sergeeva handed an eight-month ban and is believed to have resulted in her fellow athletes being prevented from waving the national flag or colours at the games’ closing ceremony.

That, however, was then. And at these games, in the dystopian moral vacuum of Communist China, different standards seem to apply. So tomorrow, Kamila Valieva will be allowed once more to take to the Olympic ice, in the short programme of the women’s single skating competition.

She is, of course, widely expected to win that event, thereby delivering not only a slap in the face for rival athletes who have chosen not to cheat, but also a stain on what remains of the Olympic movement’s credibility after a decade in which it has repeatedly failed to curb the appalling excesses of Russia’s state-sponsored doping programme. 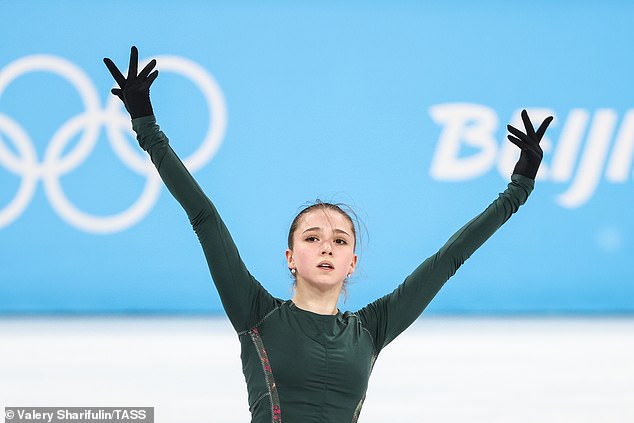 This institutionalised corruption, which permeates almost every major sport in Putin’s country, has been an open secret since 2014, when a German broadcaster called ARD released a documentary showing how high-ranking Russian officials, with the support of the Kremlin, had helped cover up endemic drug-taking by the country’s athletes.

A 300-page report, by the World Anti-Doping Agency (WADA), revealed the following year a ‘deep rooted culture of cheating’ implicating not just athletes and their coaches but also the institutions that ran major ­Russian sport.

At the 2014 winter games in Sochi, the report revealed, Putin’s secret service agents even posed as laboratory engineers in order to cover up positive tests by submitting false urine and blood samples for Russians who were doping.

By way of a sanction, it was then announced the country would be banned from international competition for four years. However the punishment is largely symbolic: Russians are still allowed to compete at Olympic games under the banner of the ‘Russian Olympic Committee’ (ROC), provided they don’t carry the Russian flag and the country’s anthem isn’t played at medal ceremonies.

That this is little more than a charade was, however, made blisteringly apparent at the Beijing opening ceremony almost a fortnight back, when even these tokenistic sanctions were brazenly flouted, showcasing Moscow’s total lack of contrition.

Not only was a speed skater called Olga Fatkulina given the honour of carrying a flag — she was suspended for doping following the Sochi games, but the ban was later overturned on appeal — each of the country’s 212 athletes was also given a uniform which, in apparent contravention of the rules, carried the colours of the Russian flag on its left sleeve. 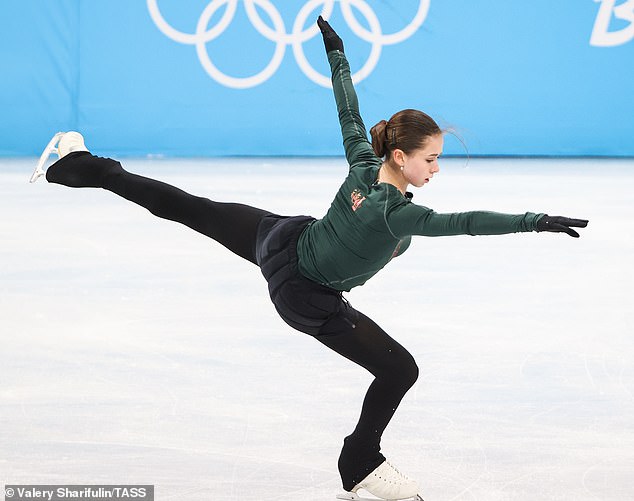 Russia’s pushback against efforts to enforce anti-doping rules has also been helped, over the years, by a series of widely criticised rulings from the Court of Arbitration for Sport.

This body, which like FIFA and the International Olympic Committee (IOC) is based in Switzerland, was responsible for an adjudication which in December 2020 decided to halve the length of Russia’s international ban from four to two years.

The U.S. Anti-Doping Agency branded the decision ‘weak’ and ‘watered down’. Its UK equivalent said it was ‘frustrated’ at the ruling, saying it did not properly reflect ‘a state-sponsored conspiracy to undermine the values of sport’.

Intriguingly, it is the same Court of Arbitration for Sport which is now responsible for Kamila Valieva’s continued involvement in these games. The quango ran a three-­person panel, sitting in Beijing, which in the early hours of this morning ruled against any attempts to have her booted out.

Valieva had initially been suspended by Russia’s own anti-doping agency on February 8, when the results of her positive test came through.

However, the ban was then rescinded the following day. WADA, along with the IOC and the International Skating Union, then applied to the court to have it reinstated.

But that request was denied, with the court citing ‘exceptional circumstances,’ arguing that Valieva’s young age makes her a ‘protected person’ who might not eventually be suspended from her sport once normal regulatory process has been allowed to run its course.

At least one contributing factor appears to be that the results of her urine sample (collected on Christmas Day) were not returned until last week, almost two months later, apparently due to a Covid outbreak at the Swedish testing laboratory where it was sent.

Quite why regulators, in the run up to a high-profile games, didn’t choose to send the sample to a different facility is unclear. The other reason seems to be that Valieva is a child. 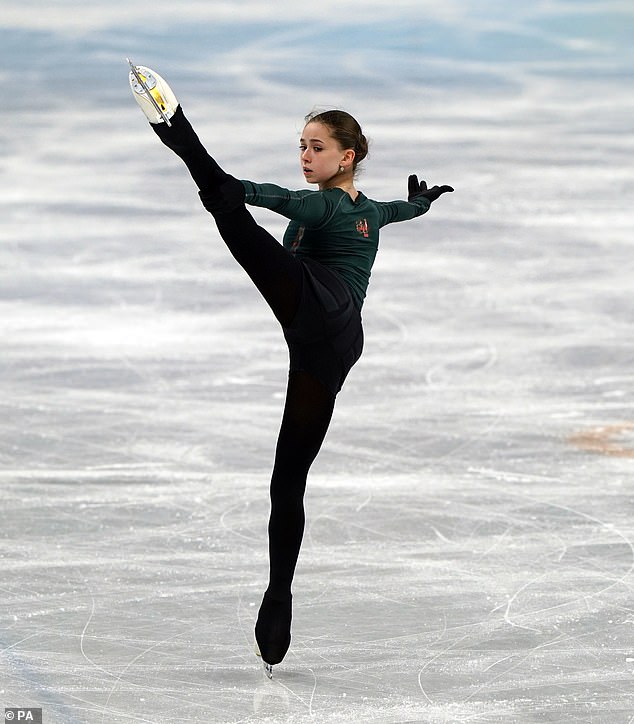 As things stand, Kamila Valieva will take to the ice sometime tomorrow

Yet while it is likely that any doping offence would have been masterminded by adults in her coaching team, the move risks creating a precedent that would effectively legalise doping for all athletes under the age of 18 — even when they compete in sports where teenagers can reach the highest levels, such as skating, or gymnastics and women’s tennis.

Little wonder that the games are descending into the sort of acrimony and farce last seen (in figure skating at least) in Salt Lake City in 2002, when Russia was accused of bribing French judges.

As things stand, Valieva will take to the ice sometime tomorrow.

Aware of the burgeoning controversy, the IOC has already said there will not be a medal ceremony if she wins.

Organisers have further stressed that she could be stripped of any prize at a later date, once the full anti-doping process has run its course. But in the meantime, Russia is doing what it does best: intimidating critics.

The British journalists who first broke the story of Valieva’s suspension, via a website called Inside The Games, claim to have been sent death threats warning them not to drink tea, in case it is poisoned.

A Kremlin spokesman has meanwhile delivered a public message to the figure skater: ‘Hold your head up, you’re a Russian, go proudly and beat everyone!’