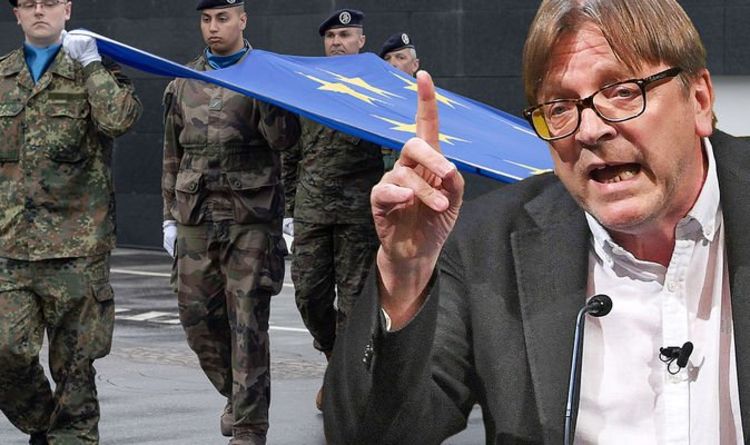 Guy Verhofstadt on EU 'standing up' to Putin in 2018

EU officials made a renewed case for a Brussels army in the wake of the fall of Afghanistan to the Taliban. The bloc’s foreign policy chief Josep Borrell argued that the event and subsequent chaotic evacuation efforts proved that Europe needs to develop its own military capacity independent of the US. In these situations, the bloc largely relies on the work of NATO.

Jens Stoltenberg, the alliance’s Secretary General and former Norwegian Prime Minister, recently suggested, however, that the EU moving towards creating its own army would divide Europe.

He said: “I welcome more European efforts on defence but that can never replace NATO and we need to make sure that Europe and North America band together.

“Any attempt to weaken the bond between North America and Europe will not only weaken NATO, it will divide Europe.”

Speaking to The Telegraph, he added: “This is partly about money – 80 per cent of our defence expenditure comes from non-EU allies […] But it’s also about politics, because any weakening of the transatlantic bond will also divide Europe.”

Speaking to The Telegraph, he added: “This is partly about money – 80 per cent of our defence expenditure comes from non-EU allies […] But it’s also about politics, because any weakening of the transatlantic bond will also divide Europe.”

His words will come as a blow to Guy Verhofstadt, an MEP and former Prime Minister of Belgium who is one of the bloc’s most vocal proponents of creating an EU army.

While Mr Verhofstadt has spoken at length about the idea, his most impassioned calls came at an ALDE conference in 2018 as he warned that Russia could advance with ease on the bloc’s borders.

JUST IN: Biden’s stream CUT OFF by White House after President goes off script

“To stand up, if necessary, against Putin.

“Do you know what the figures are? European countries are spending 40 to 45 percent of the budget of the American army.

“But we are only capable of fulfilling 10 to 15 percent of the operations of the American army.

“I am a lawyer, but even I know that we are three to four times less efficient than the Americans.

“Moreover, the reality is we spend three times more than the Russian Federation on military, but I’m not sure that if the Russian army came towards our borders that we are capable of defending ourselves without American help.

“It was President Macron in a speech during the commemoration of the First World War who said, ’28 different armies, it’s a waste of money and at the same time it’s also a danger for our collective security and that has to change in Europe’.

While NATO has warned against such a proposal, the EU appears to be pushing ahead with the calls.

It will present a draft proposal of a “first entry force” in November and wants a deal when France, the EU’s leading military power, takes over the six-month EU presidency from January.

Before events in Afghanistan, Donald Trump’s “America First” foreign policy campaign and Russia’s annexation of Crimea from Ukraine in 2014 had already accelerated work in Brussels to build a common EU defence policy.

In late 2017, EU states launched a pact to fund, develop and deploy armed forces together.

One official at the time described it as “bad news for our enemies” — despite joint military capabilities being years away.

The rhetoric is similar to that of two decades ago, when EU leaders first agreed to set up a 50,000 – 60,000 strong force, but failed to make it operational.

Now, the bloc is less ambitious in its desires, hoping to secure a deal on an army’s design by March 2022 made up of 5,000 personnel.

Two senior officials told Reuters they were frustrated that the EU was unable to protect Kabul airport for another three days beyond the August 31 US withdrawal deadline to allow for more evacuations.

Later, EU Council President Charles Michel, said: “We do not need another such geopolitical event to grasp that the EU must strive for greater decision-making autonomy and greater capacity for action in the world.”