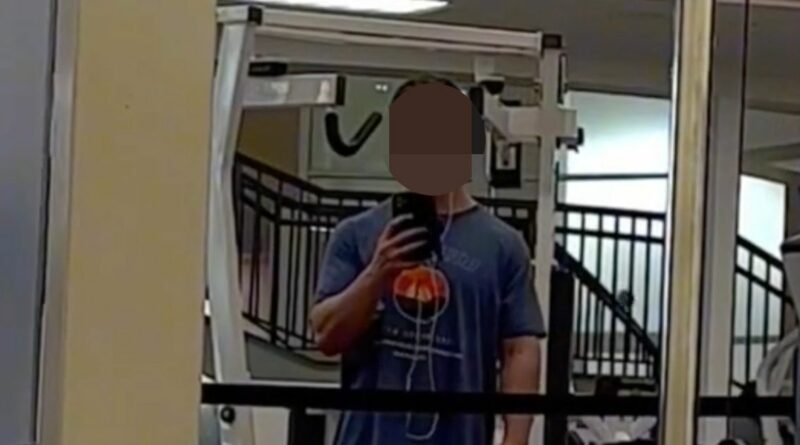 A gym-goer was praised for his bold actions when he confronted a "creepy" man he caught filming him while he was doing a topless workout.

Nick Nush, from Pennsylvania, US, went to his local gym for a workout and had taken his top off while doing a back exercise before a man stood in front of him and stared filming.

Sharing the encounter on TikTok, Nick has his phone placed behind him so that he could record his body form from the back.

As soon as he realises the man holding up a phone in front of his, he stops his set and asks: "What're you doing man?"

The man in blue t-shirt replies: "What do you mean? Getting a shirtless workout in?"

"Yeah," Nick says, which then the man fires back and calls him a "weirdo", adding: "You're shirtless in f***ing gym, retard.

"So I decided to say something to him."

The man reacts dramatically and slams a water bottle to the floor before walking up to him, saying: "Talking across a f***ing gym, what do you think?"

Nick shakes his head and tells him to "get out of my face".

The man lashes out the swear word and walks away.

Viewers were impressed at how Nick handled the situation and said he did what was safe to him at the time.

"Good job for being a bigger person there, I could have smacked him right away," one said.

"This is toxic masculinity in action," a second wrote. "You just experienced a tenth of what most women have to endure in the weights section every day."

A third added: "I mean, it's proper gym etiquette to wear a shirt if it's required, but this dude is mad pressed for no reason."

Nick wrote in comments that he knew the man was being "a tool and an a**hole" and he is more mature than him, adding: "I don't want to deal with the police for assault or being banned from the gym."