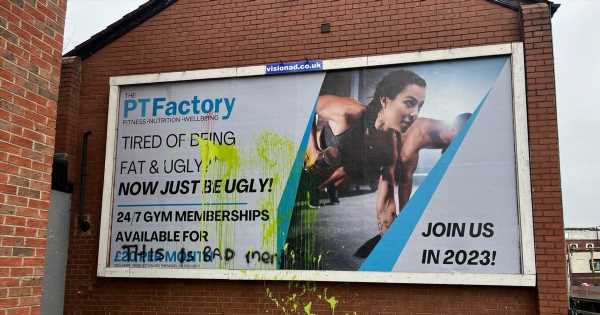 A gym owner has defended a controversial billboard poster advertising his fitness business after it was vandalised by having several pots of paint hurled at it.

The eye-catching advert, for the PT Factory in Denton, Greater Manchester, features the words: “Tired of being fat & ugly? Now just be ugly!”

The Manchester Evening News reported that Ollie Lawrence, who owns the gym, said the poster was intended as a “light-hearted joke”.

Although Mr Lawrence has received "eight or nine" complaints since it was put up in Stockport Road on December 5 to try and boost membership of the gym, he said most people had reacted positively.

But on Monday morning, the gym owner, who set up the business 12 years ago, discovered that someone had thrown several pots of paint at it.

He said: “It wasn’t our intention to offend anybody," adding: “I would not have put it up otherwise.

"We spoke to a lot of people beforehand and 99% have seen it for what it is – a joke. We’ve had thousands of comments saying how brilliant it is.

“We have had about eight or nine complaints and unfortunately someone has done what they have done.”

Despite the reaction, Mr Lawrence said he does not regret the wording on the poster, explaining: “There’s nothing malicious in it. We wanted to get a funny line out there to try and get our personality across. How do you do that on a billboard?"

“I’m a happy-go-lucky kind of guy. I’ve always been in this industry to help people.”

Mr Lawrence branded the actions of those responsible as “a step too far”, but intends to replace the billboard in the New Year, adding: "The billboard was quite expensive. That’s the main reason I was upset.

"It's a step too far. There are things I might disagree with but I don’t go vandalising them. I just ignore it and think ‘that business isn’t for me’.”